It's been dry for a couple of months now, with good soaking rain on too few days. Most days have worked up to being hot, even if they've started out cool. Rain keeps being forecast, but not much has fallen on Preuilly. We had 2 or 3 good days of rain in the third week of July, but since then nothing, except for 2 minutes of light rain on Saturday evening. Naturally, this fell just as we headed into the courtyard for apéro.

The Claise, very low at the old ford near
the mill in the middle of Preuilly. 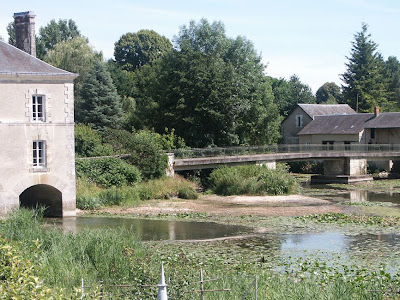 The river is as low as we have ever seen it (in contrast, April last year was as high as we have seen it). The farmers have been restricted as to how much they are allowed to extract for irrigating crops. Big cracks opened up in earth in the orchard, but the good rain in July closed them up again. So far they have not reopened, but who knows how long that will take!

The Claise at the mill in Preuilly in April 2008 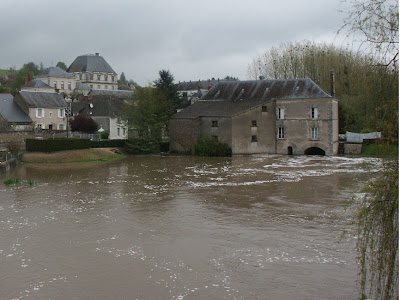 Our tomatoes in particular have suffered, being slow to develop, then when there is some rain, putting on a spurt that causes their skins to split. I think our pears will ripen a little early, because it is hot and dry, whereas the big nectarine at the potager gate is just sitting, holding a bumper crop of large green marbles. We have five zucchini (courgette) plants, but so far they aren't even close to overwhelming us with produce. Our peppers are going to produce very large perfect peppers – but only one per plant. The chillies, on the other hand, are obviously in some sort of competition to see which can produce the most fruit.

The grapes are also doing well. We are told that the vine growing over the small shelter and into the Catalpa tree are exceptionally good red table grapes, and so far they have escaped any sort of mildew. We assume a combination of the hot weather and the fact they are out in the open is the reason for this. 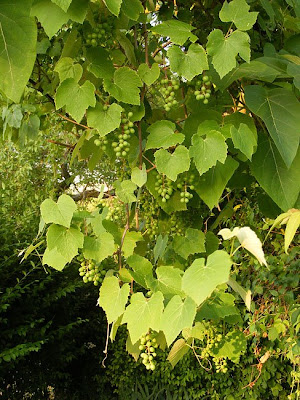 Meanwhile, we water from our ever diminishing stream. A couple of weeks ago we met the man who has gardened in our potager for the last 20 years, and he says he has only seen it this bad once before.

Yesterday evening when we arrived to water our 'orchard neighbour' from the third garden was there. Her yellow plum was very ripe and she needed to get all the fruit collected or it would rot. She very kindly gave us about 4kg of plums, as none of ours are ripe yet. The yellow plums are quite an early variety, whereas ours – Sainte Catherine, Abricot Rouge and Canada – are all later varieties. We discussed the lack of water and how low the stream was. She told us that the people who live near the source of the stream have dammed it so as to have water for their garden. I suspected as much, as the drop in the level was so sudden, and didn't recover even when we had some good rain. Our neighbour has a water butt which used to collect the water from the roof of her toolshed / cabin in the orchard, but it is old and has many tiny holes now. She wants to install a new water tank, but has decided not too because of the risk it will be stolen if it looks too new. We want to put up a small shed and collect water too, so we will have to think very carefully about how to make these improvements secure.

Our chilies are doing nothing this year :( which is curious as we've had very successful crops in past years.

And our beans are not as productive as last year. But the tomatoes are ok this year.

Our tomatoes are doing very nicely, to my way of thinking. Some, however, seem to be rotting from the bottom up. Mostly these are plum types, and the yellow ones seem especially affected. Some of the bigger round ones have the same affliction, but not the small round ones. I talked to our pharmacist, Mme Smith, this morning, and she said the malady is widespread in people's tomato gardens. "You are not alone," she said, reassuringly. In French. Her husband is a Scot.

Could you go on a mission in the middle of the night to undam the dam that has depleted your stream? It's rather selfish of the people upstream to have deprived you of your water.

Jean - would love to sneak up the stream - late at night - humming the Dambusters March and going "squerch-squerch-roger-squerch-over" to myself. Thing is, I would be worried about a retaliatory raid on my dam...

Ken, is this what we call blossom end rot?