Icecream is a favourite summer dessert in France, but even so, the French can't compete with the consumption levels of some other countries. More icecream is consumed in northern Europe than around the Mediterranean (with the exception of Italy). The biggest consumers in Europe are the Finns, at 13.3 litres per person per year. The biggest consumers in the world are the Americans, getting through an average of 0.5 litres per week per person. France comes in at 6 litres per person per year. France's very moderate performance in the icecream consumption stakes must be because two modestly sized scoops are considered a serving here, and icecream is a summer treat. Anyone seen eating icecream in the winter in France is clearly a tourist.

As well as the industrially produced icecream available in the supermarkets, there are many small companies and individuals making glaces artisanales. The main difference between an industrial product and an artisan product comes with the quality of the raw materials. An artisanal icecream is made from fresh whole milk, organic eggs and local fruit picked at optimal maturity. Another difference is in the way they are made, especially in the amount of air incorporated into the mix. Industrial icecreams have a lot of air in order to add volume. 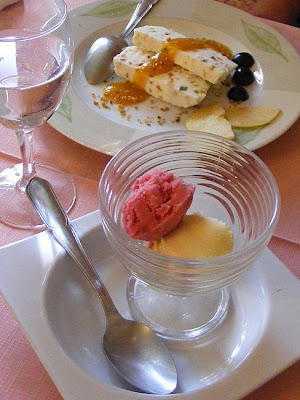 In France there are three basic sorts of icecream, the definitions of which are set by law:
A scoop of icecream is called a boule in French (think pétanque), not to be confused with the bowl it comes in, which is a coupe. French icecreams do not have flavours, they have parfums. One of the nicest things about icecream in France is that if you opt to have it in a cone, the cone will be one of those crisp crunchy wafer cones, not a nasty piece of moulded cardboard (or whatever completely unispiring substance those icecream cones are made of).

The most famous glacier - sorbetière in France is Berthillon, based on the Ile de Saint Louis in Paris, but there are many other excellent artisan producers. David Lebovitz has a useful list of the Paris based ones here.

*Photograph taken at l'Image in Preuilly. Les glaces are the one thing on the menu that is not made in house here, which is perhaps a measure of how specialised a skill it is seen to be. Note that it is not seen as necessary to bulk the dish up with disgusting squirty cream or cheap syrupy topping.
Posted by Susan at 09:00

I am not eating my share of American ice cream. Don't worry though, my teenagers are making up for it.

I'm glad to know about creme glacee, made with cultured cream. I've got to try that.

Is cream one of the "milk proteins and fats" in the definition of glace?

A portion of ice cream in America is huge compared to a portion of glace in France. That's why American per capita consumption is so high (and an example that explains why people are so much heavier there).