As well as having a courtyard at the front of the graineterie, we have a back garden. This is where, last year, Susan planted her experimental wildlife garden, and also where we dry our clothes. When we bought the house the garden had a chain link fence, with a rickety wooden gate that didn't really open, all hung on rotting wooden posts. 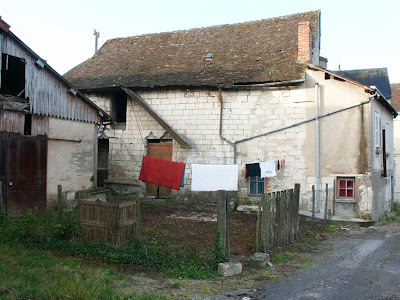 In September 2007 the fence was demolished to allow the roofers access to the back of the barn, and since then we have had an unenclosed space that people don't appear to realise is part of our property and take the opportunity to park on when they are visiting the neighbours.

This is OK for a half ruined barn, but no good at all for the kind of sophisticated outdoor living Susan and I do (← insert wry humour icon here), so the plan is to enclose the area with a wall topped by wrought iron railings. 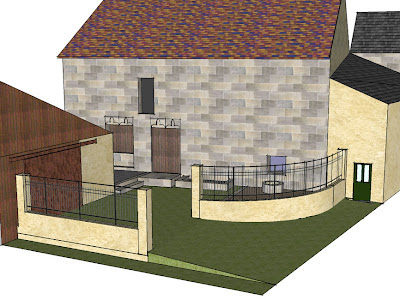 We arranged with Alex to do a devis for this work, and put in an application with the Mairie for permission to erect a wall. Two copies of the application and six copies of the plans were lodged three weeks ago. Last week we received a letter from the Prefecture asking for more photos and telling us that the architect from Bâtiments de France (the built heritage organisation) must agree, and that we have a 2 month delay to getting permission, rather than the normal one month delay. This means that in two months, if we hear nothing further, we can assume that permission is granted. After that we go to the Mairie and ask for a certificate giving permission for the work to go ahead.

We then have have to erect a notice ("a panel visible from the public way describing the project") while the work is underway.

At first glance this all looks like a lot of bureaucratic messing about for a garden wall, but we are lucky enough to own a quite important building near to heritage listed buildings. At least if we get permission to build the wall we won't be asked to demolish it at some time in the future - nor will we have a reputation as barbarians when it comes to submitting any plans we might have for working on the graineterie itself.

I hope you get the permis. It will look super and be a very practical outdoor area too. You are lucky that you also have lots of indoor storage space so your garden will be able to remain uncluttered.

That plan looks great and I hope that everything will go through smoothly for the permis. That wall is going to be a welcome addition.

Félicitations for the stairway that I just saw in your video. Wonderful !