We have written about Brocante/Vide Grenier before, but never about the one held in Preuilly sur Claise.

The first Vide Grenier we ever went to was in Preuilly, the day we signed the "compromis de vente" on our house. We have to admit to not being impressed with the items on offer, and left after about 10 minutes. That was three years ago, but since 2006 we have not been in town on the first weekend in August and so have missed the subsequent events. This year we are residents, and there are certain events you can't diplomatically miss, especially when neighbours and men you have had in the house installing staircases ask if you're going because they are having stalls. 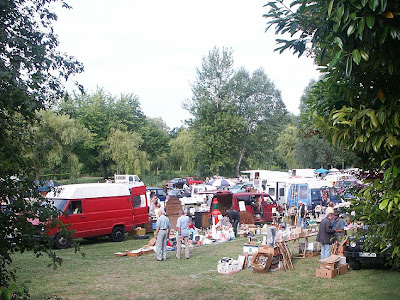 So it passes that Saturday morning we went to the Brocante in Preuilly, taking the new passageway through the houses in the process. This is called "traverse du Sieur Tintin", a strange name - who was this Tintin who is due the honourofic "Sir"? Surely not the comic book character, but I can find no reference to any other. Maybe we have to ask the Archaeological Society. 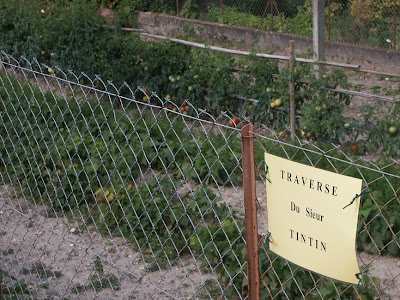 Talking of whom: We have joined the Society. It has taken us a while to get around to it, due to a number of reasons; when you join the society you get a copy of the latest (annual) magazine, last years copy of which we had already bought: and we just haven't got around to it since this year's issue was published. There are lots of interesting things in this years "Cahirs de Poterne", some of which we will be mentioning in coming days.

We didn't buy anything at the brocante, but I have to say it was better than I remember 2006's being. A lot more stalls, and even some stuff I might have (on another day) considered buying.

These events are more than just jumble sales, they are also a chance for everyone to catch up on everyone else's news and for local organisations to recruit members and raise funds. The school was selling old desks and some of the canvas camping beds the children have their afternoon naps on, and the pompiers were running the beer and food tents. We bonjoured our way around the stalls, although some of the people we greeted I know I have met - but have no idea of who they are or where we met them.

I'm almost sure that, for some reason, the traverse is named after that famous "franco-belge" comic book character Tintin, of Tintin et Milou, Tintin and Snowy in English, by the Belgian cartoonist Georges Remi, better known as Hergé.
Here is a link in English for those interested:
http://en.wikipedia.org/wiki/Tintin_and_Snowy

P.S.
Sieur, English sir, is the second half of monsieur or messire or milord. That second half is obsolete and not used formally any longer, but is definitely used in a pleasant way nowadays. As in la Traverse du sieur Tintin.

It's amazing how much junk is for sale at these events. I have seen stuff that I would have long since thrown out, not even given to the charity shops, with ridiculous prices on. On the other hand you can then come across something really nice and sensibly priced. Great fun anyway for the carnival atmosphere.
Come to think of it, I don't think I have ever seen a charity shop in France. Do they have them ??

Jean: There is really only Emmaus who do anything like charity shops in France. There's one in Châtellerault. At the brocantes you will see a number of stalls raising money for charity with donated items though. Preuilly has the Red Cross for instance.

This year's brocante was much better than previous years. The quality of the junk was better and there were more stalls.

I've been told that these brocantes are very much like US garage/yard sales in that there are dealers who go in very early and snap up the good junk for resale at their shops.

By the time I (and other mere mortals) get up and out, the good stuff is long gone and we wander around looking at the left-overs.

This was proved when Ken and I held a garage sale prior to our move to France. Professional sale attenders were waiting outside our garage door at 6:30 am for us to open our sale. They were in and out very quickly and long before the casual shoppers showed up.

Walt - I suspect the same. Maybe in order to find bargains we should brocante before breakfast.

We have found that the prices increase and the quality decreases as the temperatures rise. Note we are in the SW so it maybe diffrent in the North :-)

Also to get the bargains you need to be there very early in the morning :-(