We have 3 plum trees and 4 Nectarine trees in the verger.

The fruit on two of the nectarine trees ripened quite early - about 4 weeks ago. The fruit was large, extra tasty and extra sweet, but the small tree in the potager doubly so. We can't comment on the other trees; the big tree (which we commented on here) has suffered badly in the drought, and most of its fruit have stopped developing at the "hard as bullets" stage and gone on to the "shrivelled and falling off" stage. There are some fruit worth picking, and they're not bad at all. The last of the nectarine trees has only 3 fruit and is suffering likewise.

The plum trees have been a revelation - the yellow plums are Ste Catherine and never looked like ripening until the day, all of a sudden, when they were begging to be picked. They are quite small, and incredibly sweet and juicy, if not particularly tasty. The others are "prunier abrico rouge", a very large plum with red/purple skin and bright yellow flesh, and they are super tasty. 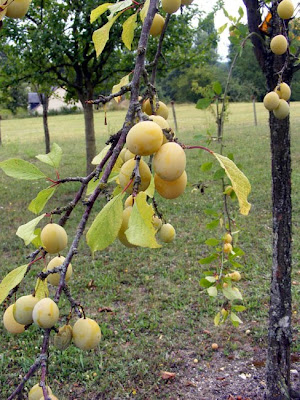 The abrico rouge is a large tree, and so far we have half picked it, and picked up the windfalls. On Saturday evening we decided to give the Ste Catherine a shake, and all of its fruit fell off. This is a lot easier than climbing a ladder! Once we have processed all of them (there's only about 4kg or so) and our freezer arrives (hopefully tomorrow!!) we will give the abrico rouge a shake. 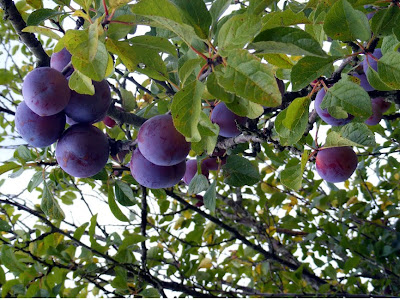 We went to the orchard this morning to give the tree a shake, even though it started raining (I will dignify the 8 drops of rain so far with that term in the hope it provokes a response). There weren't as many plum left as we thought, but at least we have taken all the plums of our trees.

Are the purple plums the ones called quetches? The yellow ones might be mirabelles de Nancy, which compared to mirabelles de Metz are larger and a uniform yellow color, not spotted with red as the latter can be. Our neighborhood plums of all these varieties are ripe right now too.

That should be quetsches, with an s in the middle.

Ken - acording to the list we were given by the man who planted the trees, the yellow ones are Ste Catherine, the purple one Abrico Rouge. Further than that, no idea