Yesterday's blog had a photo of Susan painting the wall of our guest bedroom. This was so successful that we have decided to paint the main bedroom as well: these are only temporary measures because the rooms need insulating and panelling, but it will make the rooms nicer to use in the meantime.

The paint we are using for the plaster walls is Brico-Depot super cheap acrylic matt white paint, €5.65 for 10 litres. The effect is startling - a nice chalky pure white finish where before we had stains left by mould. Interestingly, the mold was under the wallpaper and only grew where the background colour was, leaving us with a stain in the fern leaf pattern of whatever wallpaper was up when the roof in that room was leaking.

We can consider ourselves proper renovators
now we have bought a bootload of paint. 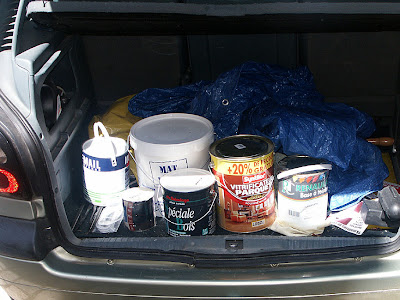 We originally went out today to buy more undercoat for the shutters I am renovating, and a can of the bluey-grey colour we have decided on as the final colour. BricoMarche in Yzeures didn't have the colour we were after, but were offering to tint a can of paint to the right shade. The problem I had with that concept was the fact the 2.5 litre can of paint base was almost €90, with €6 euro for each colour of tint added - and €10 for the processing. This struck me as a bit rich (reference yesterdays post for the sort of thing I was thinking) and we made the executive decision to visit BricoDepot in Dissay instead.

That was a much more successful expedition - we bought another 10 litres of super cheapo so we can do the main bedroom, 2.5 litres of microporus undercoat for the shutters, 6 litres of polyurethane for the staircase and 2.5litres of tinted just for us blue-grey for the shutters. Total damage? Just over €120.

On the way back we had lunch on the terrace at Le Relais du Clain, a bar-restaurant in Beaumont on the D910 and had a huge salad and dessert and a small pitcher of charentais rosé. As we have come to expect from this kind of place, the service was friendly, the food was well prepared and imaginative - and it was all very reasonably price, at €27 for two people.

I had a brainstorm, and hung the shutters on
my new échafaudage to paint 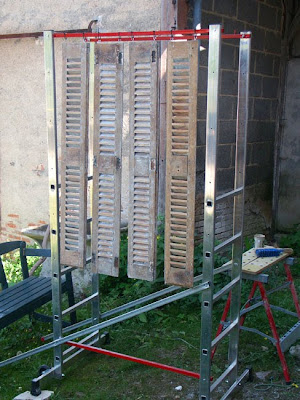 To celebrate spending all that money I decided to put the paint (or at least the undercoat) to good use and give the shutters their first coat. Painting louvres is a thoroughly annoying job; not as hard work as sanding , but difficult and messy. At least I managed to hang them up so I could actually get to both sides. I considered myself to be on a roll, so I gave the window frame its first undercoat as well.

After dinner we walked to the orchard and did some picking - a couple of kilos of plums, assorted tomatoes, beans and courgettes, and best of all - my hot chilies are turning red.

All in all, not a bad day - even if I did spend money

British acquaintances are always telling me that the paint sold in the U.K. is of much higher quality than the French stuff. Is it as expensive?

Ken - Paint in the UK in general is of good quality - like Dulux and Crown, even the DIY stores own brands are good, and I think by comparison quite cheap. Checkout the big DIY chainstores like Homebase or B&Q websites. We pretty much buy all our paint in the UK for this reason, plus of course it saves us from spending our holidays in DIY shops!