A Roof in Need of Loving

I think the house under this roof is currently for sale. Not for a lot of money, but I would hazard a guess that the roof might need some work. 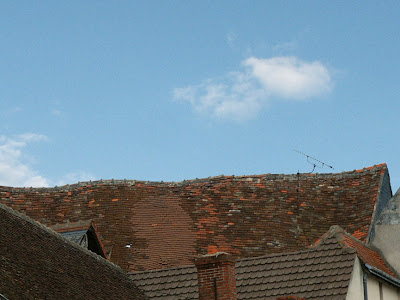 Talking of roofs, I mentioned in a previous post about aggrandising your house by replacing terracotta tiles with slate as and when you can afford it. In the above photo you will notice a roof where the some of the terracotta tiles have been replaced with modern tiles. At first glance, they could be modern concrete tiles - not usually a good idea, because concrete tiles are heavy, and the roof needs a lot more structure to it - but there are a number of places nearby where tiles this shape are made in terracotta. I don't know if these are the terracotta tiles, but I hope so...

There is a fine example of the "replacing tiles with slate because tiles are for poor people" syndrome at the bottom of the rue des Pavillons. Facing the Abbaye it's all tiles slate, but the back of the building is relatively untouched. You might also notice the small area of lead roofing on the Abbaye itself. 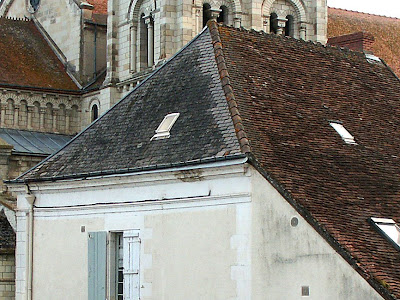 This is an interesting example of conspicuous consumption - The slate on roofs last 100 years at most, whereas terracotta roofs seem to go on forever.

ps The blog will be offline for about 5 minutes tomorrow morning.
Posted by Simon at 10:00

Email ThisBlogThis!Share to TwitterShare to FacebookShare to Pinterest
Labels: Pictures of Preuilly, Roofing

I always thought that slate can last for ever, as it's rock. And the terracotta is used after something like 60 years - my parent had to change it because the small 'buttons' holding the tile on its place were completely crumbled.

Hi Katarina.
Depending on where it comes from, slate can last for up to about 70 years.

When we had our roof redone, we used Spanish slate, which has a lifespan slightly shorter than Welsh and French slate. We could have had Chinese slate, which is a lot cheaper, but that can last as little as 20 years.

It depends in part (I believe) on the amount of oil locked into the stone stone. Once the oil gets washed out, the stone goes white and powdery and delaminates - the layers within the stone start to separate.

UV light kills everything in the end; tiles, slate etc but not copper or lead (which will outlive us all!). Theives like metal roofs. The UV attrition to roofings is much harder on sun-soaked pitches. Frost finally splits up the wafered edges of slates. Slates can be laid the flattest and are often used for this reason in a partial way in France, for example close to the eaves of an otherwise tile roof. In terms of 'chic', Touraine (which should have slate roofs) considers itself a notch up on Poitou (with its tuiles rondes). Tuiles plats are intermediate in snob terms. La Vendée is full of all sorts of naff roofs - not surprising that they have been so anarchist and uppity.

Robot 9:
Anyone who has done up an old house gets to learn quite a bit about roofs and roofing materials. It becomes either a phobia or a fetish

Oh wow! If that roof were a person, he'd be in dire need of a dentist. There is a beauty in the old tiles. If only they TRULY last forever...