Custard is quite easy to make, except for the tricky bit at the end where you have to watch it like a hawk and stir continuously to prevent it curdling. I make custard frequently, as Simon is very keen on good stodgy British puddings*, washed down with rather more custard than is an elegant sufficiency. 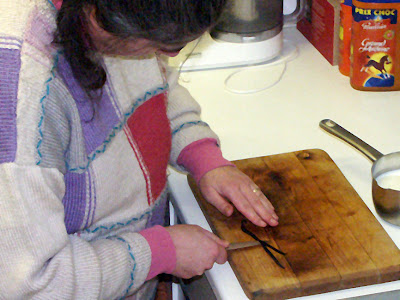 First, slice a vanilla pod open and scrape out the seeds. Put the seeds and the pod in to infuse in a pint of milk, by bringing it to the boil then setting it aside for 20 minutes. 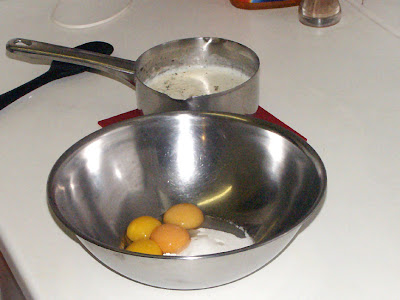 Next, mix together 4 egg yolks, 3 tablespoons of sugar (vanilla flavoured if you've been reusing your vanilla pods frugally) and 2 teaspoons of cornflour. I most definitely stir these ingredients together, never whisk – the added air with whisking changes the flavour and mouthfeel of the custard. You may like the more moussy effect, but I find it a bit weird. The addition of cornflour is a cheat, by the way. It acts to help stabilise the mixture and give you more leeway before it curdles. I can make beautiful custard without the cornflour, but it takes a little bit longer and I have to be more careful about the temperature. Our stove has solid plates which heat up and cool down slowly, so I don't have the control I would like over the temperature and have to use a work around. I could use a bain marie, but that's a bit more trouble and the thickening takes even longer. 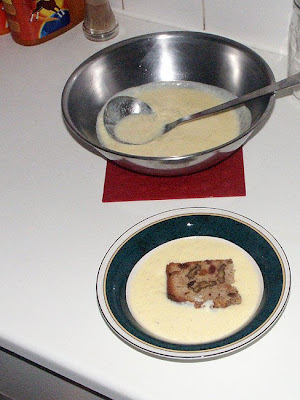 Bring the milk back to the boil, then strain into the egg mixture. Give it a quick stir and clean the saucepan, which may have a bit of caramelised milk stuck to the bottom. Put the custard mixture back in the clean saucepan and set on a medium-low heat. Stir constantly, making sure it stays just under boiling point, until it is thickened. This will make a pouring sauce. If you want thick gloopy custard, just double the quantity of cornflour.

*Actually, Simon is keen on most puddings - and the true meaning of "elegant sufficiency" is "not enough". Simon
Posted by Susan at 10:00

I'm going to try this walnut cake since cooked pears are my "péché mignon": my weakness! Hope my crème anglaise won't curdle as it usually does.
BTW, in France they never use walnut oil by itself. but mix it with regular peanut oil for salad dressing.