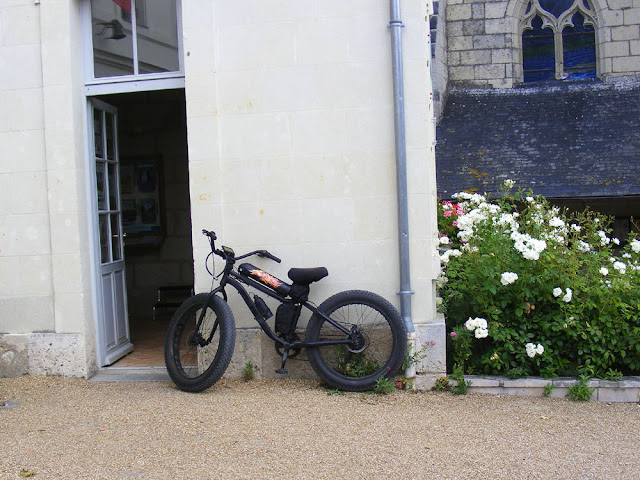 This presumably custom bicycle belongs to Gandalf as far as I can tell. I encountered it whilst making a toilet stop at Turquant with a walking group. When we got there the men's toilet was locked. We assumed it was occupied and the men just waited a bit. The minutes went on and the door didn't open, so we assumed it was out of order and the men lined up to use the women's. Finally, to our surprise, the door of the men's toilet creaked open and this bike emerged, propelled by a rather extraordinary looking man with long white hair and beard, a slightly sheepish expression and dressed in what looked like handmedowns. We smiled and tried to look friendly, as did he, but no words were exchanged. We watched as he crossed the courtyard, parked the bike against the unmanned tourist office wall and went inside. He didn't emerge again. Our impression was that he had spent the night in the men's toilet. I would have loved to have taken his photo but felt it was a bit intrusive and didn't like to ask.

The bike is electrically assisted.... he might have had an arrangement for charging the beast.
And these "big wheel" electrically assisted bikes are expensive, even second hand... they haven't been out as a 'style' for long. The guy was probably an excentric millionaire!

If there was a sink with hot water in there, maybe he was just taking a bird bath.

I thought the bike looked fairly upmarket and trendy for a tramp.

Good thought. I can't remember if there was hot water or not, and if he was having a wash he was doing so remarkably quietly.