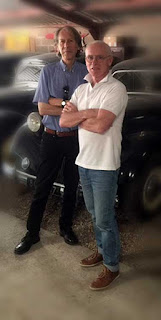 Last week Susan and I organised lunch with Leon and Sue (from Australia) and our friend Olivier (from near Amboise). Olivier writes automotive books (mainly about Citroens), and Leon has penned the odd book or two about cars himself. After lunch Olivier invited us all back to his house for coffee, and to show Leon his pre-war Traction Avant (think Célestine's older sister).
Talk about separated at birth! It was an afternoon made even more remarkable by the fact that a couple of years ago Leon had met Olivier's son in Australia, and had sold his previous Traction Avant to Olivier's son's best friend in Melbourne.


Small world, full of great people.
The restaurant we ate at was Le Bistrot du Terminus in Nazelles Négron. It does a great menu at 14€50, including buffet entrée, a choice of mains, and buffet dessert. If you haven't been - do!
Posted by Simon at 09:00

Things have started to settle a little now after getting Sue back home and now to have my father's celebration of life tribute thursday. We shall then get back to blogging again on a regular basis. Our visit to meet Olivier was one of the highlights of this trip - thank you.