Recently I had the opportunity to join a group walking across the bay from the Ecomusée de la Baie de Mont Saint Michel to Mont Saint Michel in Normandy. I was working with Walking Adventures International as their local guide in the Loire Valley and after hearing what a wonderful experience it was to approach the Mont from across the sands at low tide, I requested to join the group early. Our local guide was François Lamotte d'Argy, who focused as much on the ecology of the area as the history as we walked.


The saltmarshes with Mont Saint Michel in the background. 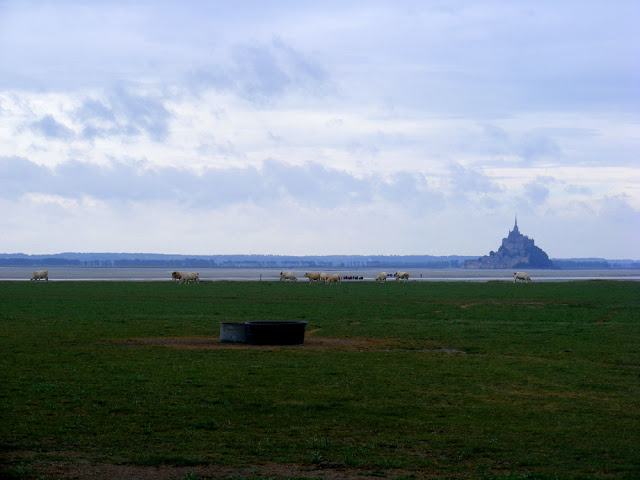 We started by walking across the saltmarshes, home to grazing sheep and cattle. Once we got beyond the electric fences keeping the cattle beyond the limits of the tides François pointed out edible plants such as the samphire and we all had a taste. 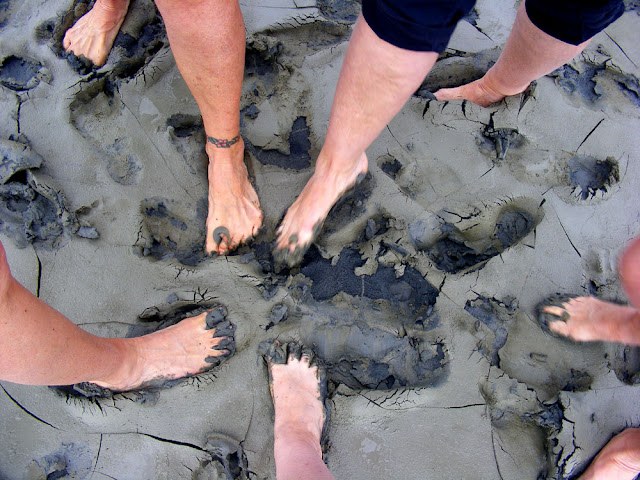 The saltmarshes are succeeded by fine squidgy muddy silt. It is covered by a film of algae that is the first stage of the land being reclaimed from the sea.


Walking across the sand. 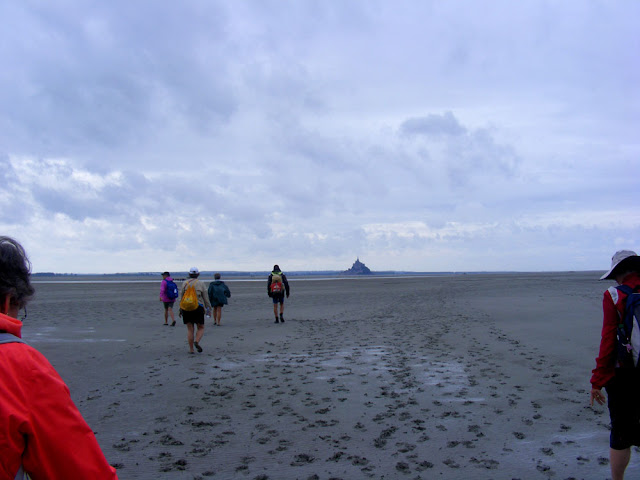 The mud gives way to sand, which is inundated daily by the tide. The mud and sand are full of little creatures, including tiny shrimp in any little puddle. The bay is an important food resevoir for wading birds, many of which are migratory and need stopovers like Mont Saint Michel in order to fatten up for their journeys north in the spring and south in the autumn.


François leading the group out of one of the rivers. 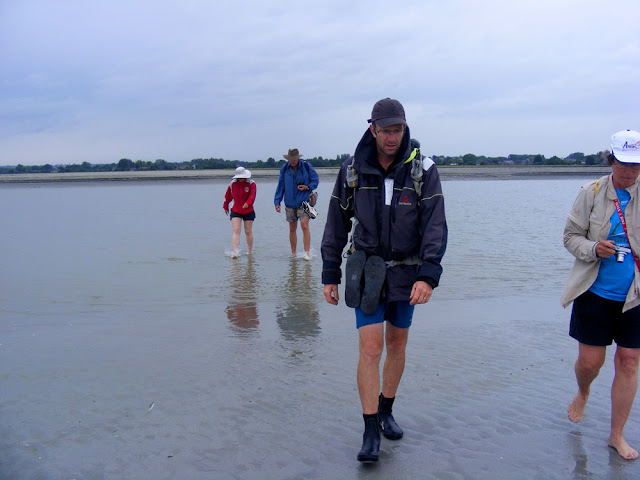 The Mont Saint Michel estuary is where three rivers, the Sée, the Sélune and the Couesnon empty into the sea. The river channels twist and curve, changing their paths over time, which is one of the reasons you need a guide to lead the crossing.


François listening to the sand. 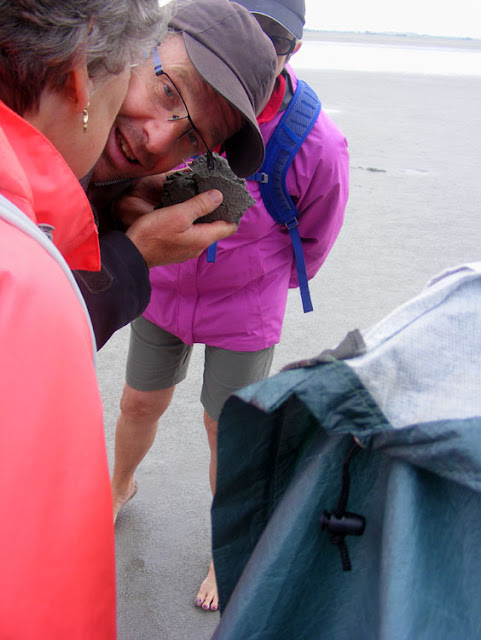 The sandbanks between the rivers are full of tiny organisms, and if you stand still and listen you can hear them sucking and blowing. If you pick up a handful of sand it's full of tiny holes made by these little creatures.


Strung out across the sands. 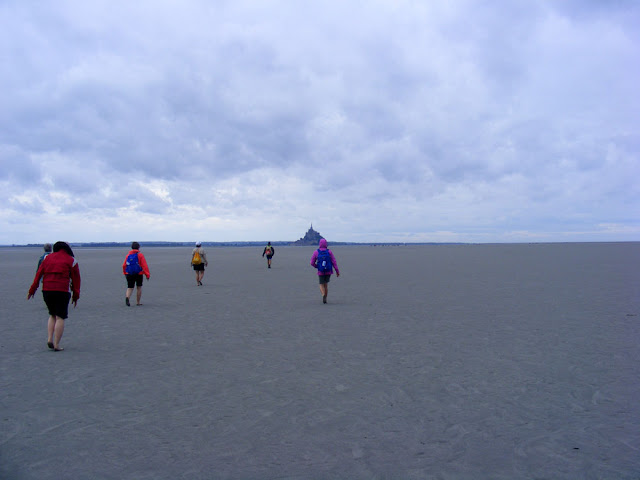 The walk we did took about three hours, during which time the Mont never seemed to get any closer. At this point we are all strung out, walking in contemplative silence to recreate the experience of being a medieval pilgrim. The only sound was the wind, the distinctive call of the Redshank Tringa totanus...and the squishing of François' booties. 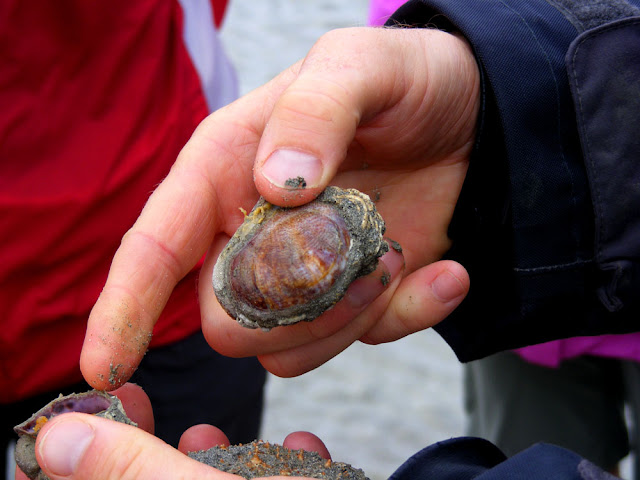 We found whelk, cockle and winkle shells, bits of coral, spider crab carapaces and some Slipper Limpets Crepidula fornicator. These last are notable for the stacks of up to a dozen animals that they form, with the lower ones being older females and the upper ones younger males.


The Mont and its reflection. 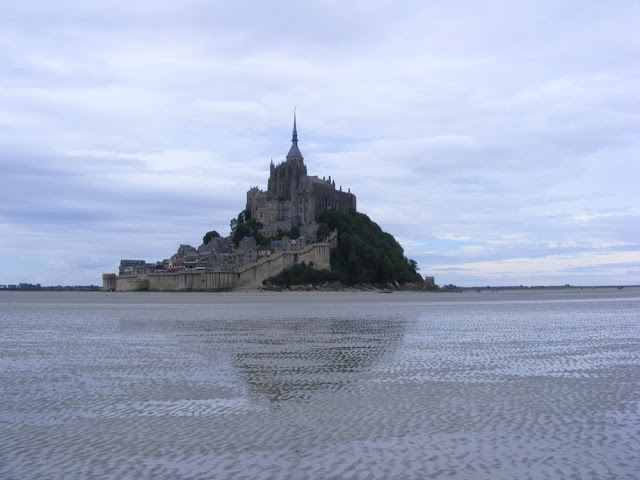 At last the Mont gets a bit closer.


François draws a map of the new water management system. 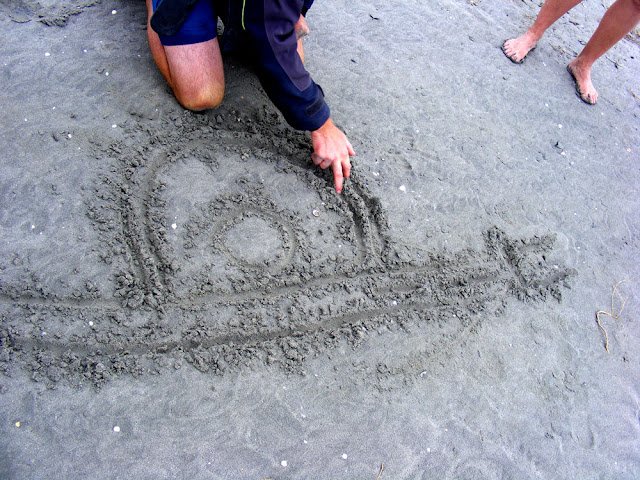 François' map shows the canalised river Couesnon at the bottom, with the barrier and the flow divider on the right. The water can be directed around between the Mont and the mainland to scour it out and keep it an island. The scheme is generally hailed as a great success but François is starting to have concerns about how much the sand is moving around, how much further upstream the rivers are converging and how all of this might be affecting the wading birds and their food sources.


Washing our feet at the base of the Mont. 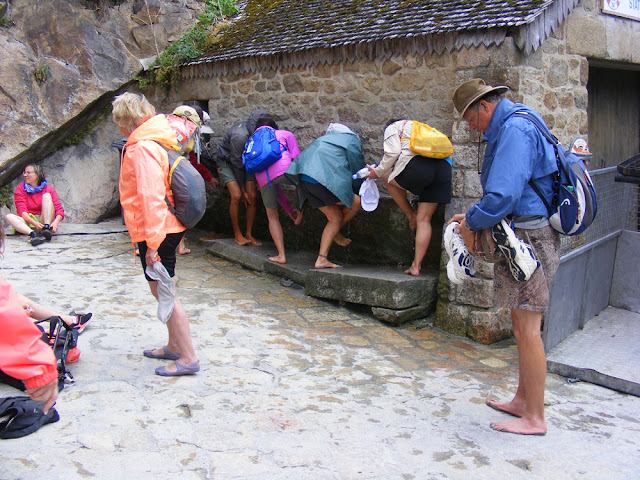 We didn't have to return to where we set off from. We took the regular shuttle from MSM to our hotel in the village on the mainland.

They are looking for a new guide for morecambe bay...

Wow! Such an adventure! The last and only time I was at the Mont, I was seventeen, so you can figure out how long ago that was! Things have changed, I guess.

Hmmm...not sure crossing a completely different bay once qualifies me...

I think you would find that many things have not. The Mont itself I suspect is much the same, it's just the approach that has changed.

Thanks. The walk is well worth doing.