European Box Buxus sempervirens is probably native (or at least naturalised for more than a thousand years) in this area. Up until 2009 it had no significant insect pests, although it could be attacked by the fungal diseases known as box blights, which arrived in France in 2006. Sadly, now there is a moth which arrived in our garden last year, and this year has caused significant devastation in gardens and in the forest locally.

Caterpillars have got the low hedge and are half way up the Box ball. 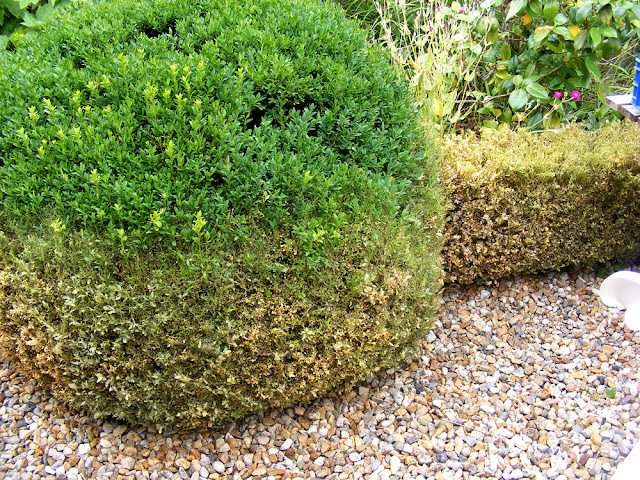 The brown and white Box Tree Moth Cydalima perspectalis is native to east Asia and seems to have been accidentally introduced first to Germany in Europe. The caterpillars eat the soft green parts of the leaves and not the harder central rib and outer margin, so the plants take on a particular lacey appearance. Ironically, one of their predators is also here in Europe, and Yellow-legged Asian Hornet Vespa velutina, currently causing a lot of concern amongst apiarists, has been observed taking caterpillars in France. Supposedly birds do not like the caterpillars, as they have ingested a lot of toxins from the Box leaves, but Simon has witnessed sparrows taking the caterpillars in a friend's garden.

Various synthetic insecticides, including pyrethrin sprays, will kill the caterpillars, as will Bacillus thuringensis and the appropriate nematode. They need to be applied regularly (about once every 10 days) to keep plants free of the caterpillars. Some control can be achieved by using pheromone traps from March to October to catch the males and prevent the females laying so many fertilized eggs.

The caterpillars and their typical sticky web and pattern of eating just the soft parts of the leaf. 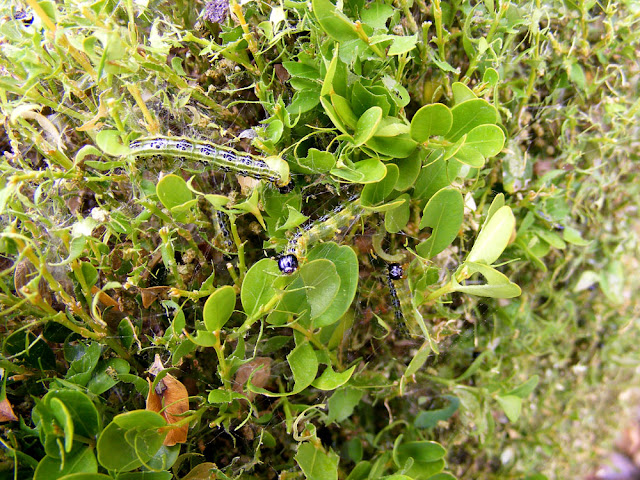 The plants don't die, but since Box is often topiarised, cutting it back to allow encourage vigorous shoots from the base to re-establish a nice green plant is not always an option. I notice that a lot of the online garden advice websites are claiming that hand picking off the caterpillars is a worthwhile method of control, but it's obvious to me that there are too many caterpillars for this to work once you have an infestation. 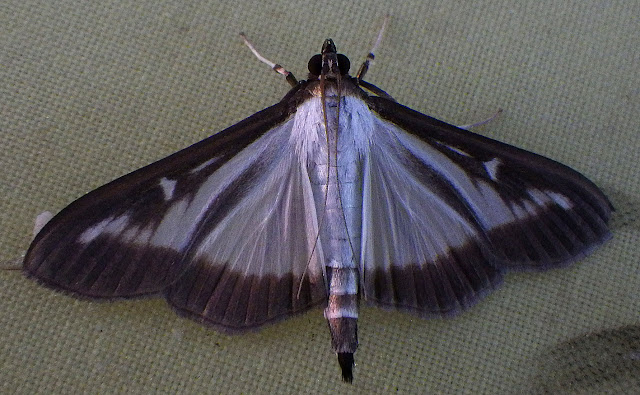 Email ThisBlogThis!Share to TwitterShare to FacebookShare to Pinterest
Labels: butterflies and moths, Gardens and Parks, Insects, nature and wildlife, Pictures of Preuilly

Susan, do you want a picture, of the moth, to add to this post?

Yes please. I saw one the other day and foolishly didn't take a picture.

We had a massive invasion a couple of years ago. We treated all our boxwood in May and then promptly forgot to treat it again but your post fortunately jogged our memory and those damn caterpillars are there again. We'll be treating tomorrow. We also have hornets back in our chimney, though not the Asian ones. They are a little early this year. They usually come in September. There is always something isn't there? Jean Michel has just finished remplacing all the wooden pickets in our vegtable patch, eaten away by a fungus as I explained. We've used super cheap upended outdoor tiles.