Preuilly is full of grandchildren in August. They are sent down from Paris and from other big cities during the school holidays to stay with their grandparents in the country. All over France small towns and villages experience an influx of young people in August.


Ludmilla weighs butter, while Hamud, Yasmine and Aboud look on. 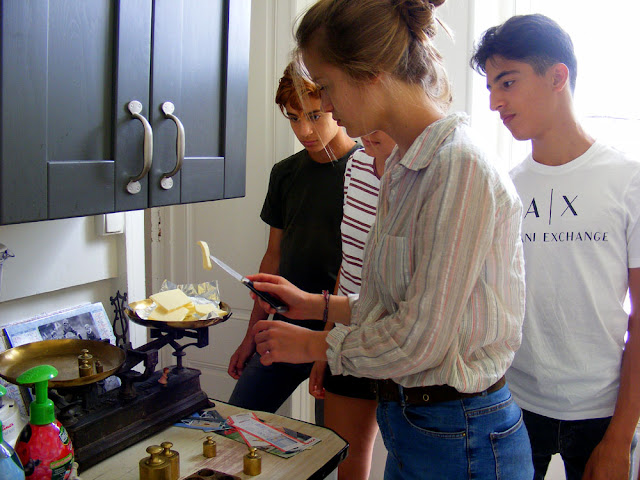 My friend Christiane is one of these grandparents, and she currently has four of her teenaged grandchildren in the house. She thought it would be a good idea if they kept up their English studies and spent some time with me too. So I had to dream up some activities that we could do together whilst speaking English. Baking cakes proved to be by far the most successful.


Yasmine and Ludmilla grease a rum baba mould for the boys' chocolate cake. 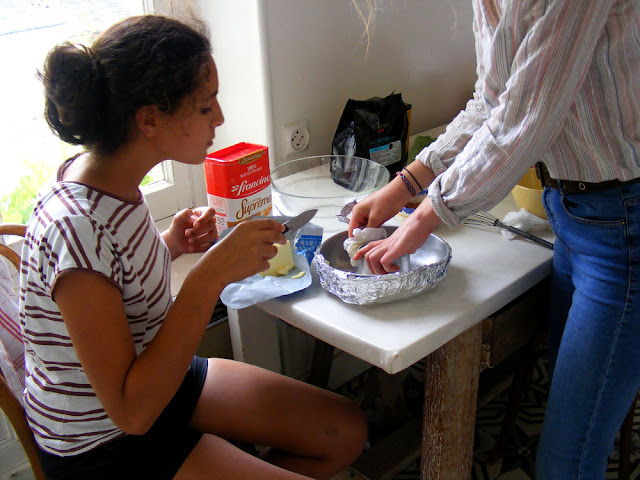 I asked the kids what type of cake they wanted to make. Hamud said 'chocolate!' and Ludmilla said 'lemon?' I gave them a selection of recipes in English and the boys chose Chocolate Sponge Cake and the girls chose Lemon Drizzle Cake. 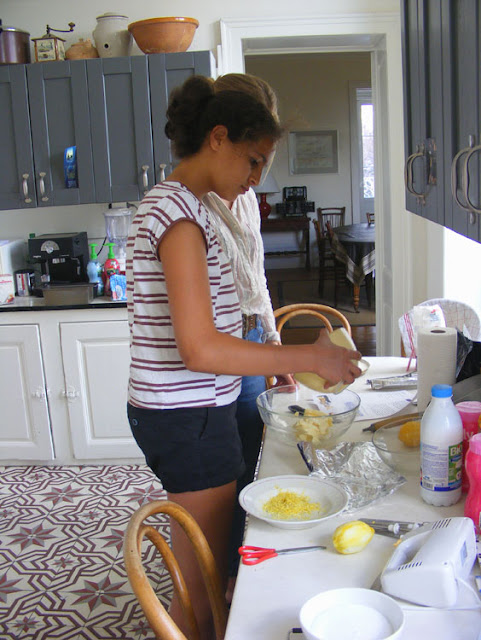 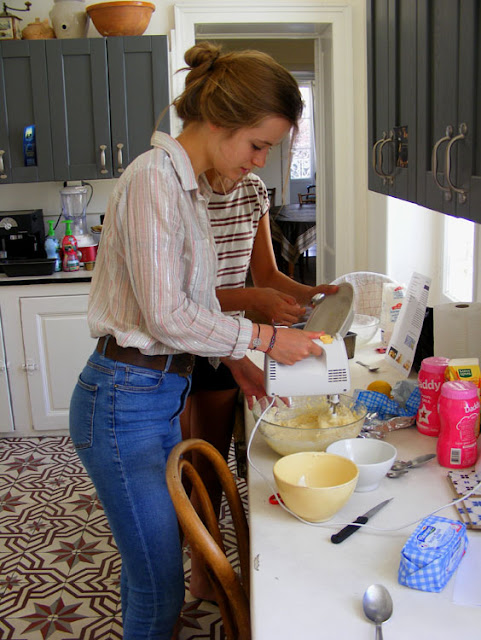 We decided to use a rum baba mould for the boys' cake because Christiane didn't have two sponge tins the same size. Like the beautiful old kitchen scales Ludmilla is using in the first photo, the rum baba mould had been Christiane's mother's, so the kids great-grandmother's. It was a bit battered, but the girls greased it thoroughly and the cake released with no problems. 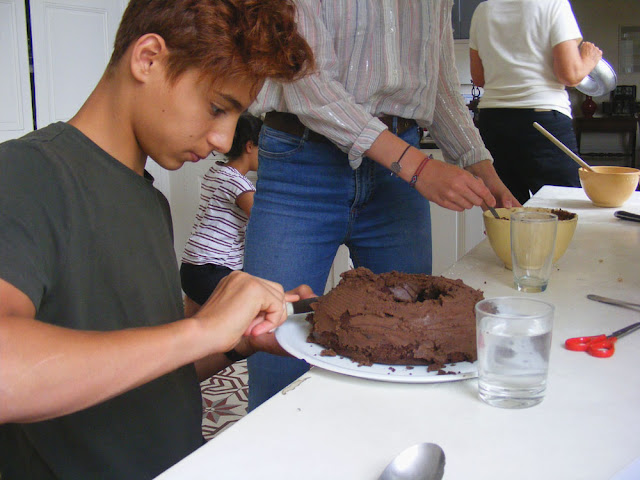 I enjoyed spending time with the kids. Like so many young people I meet, they are smart, funny and good company. They worked really well together, sharing the tasks fairly and not bickering or niggling one another. They are a credit to their parents. 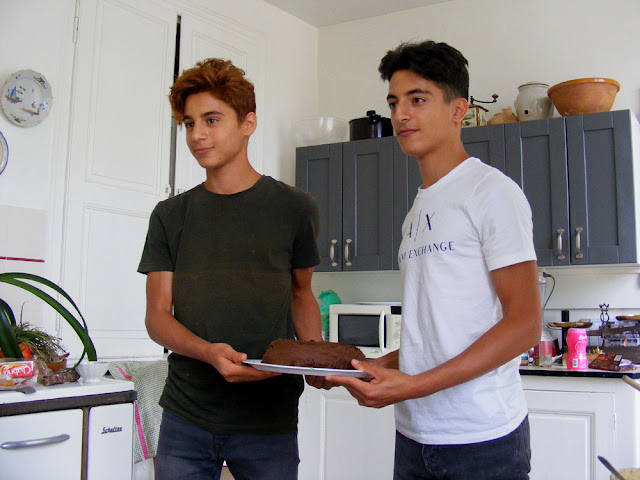 Proud granny Christiane sends a picture to the kids' parents. 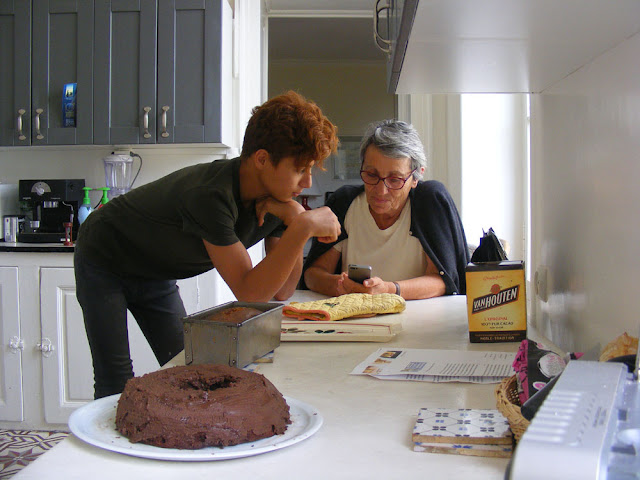 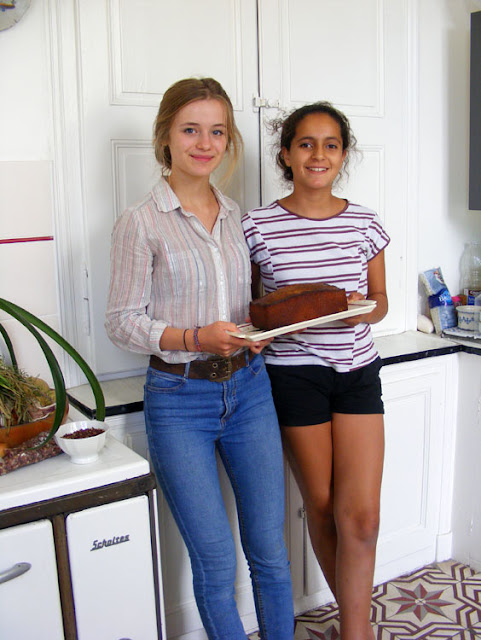 Hamud concentrating on getting perfect slices. 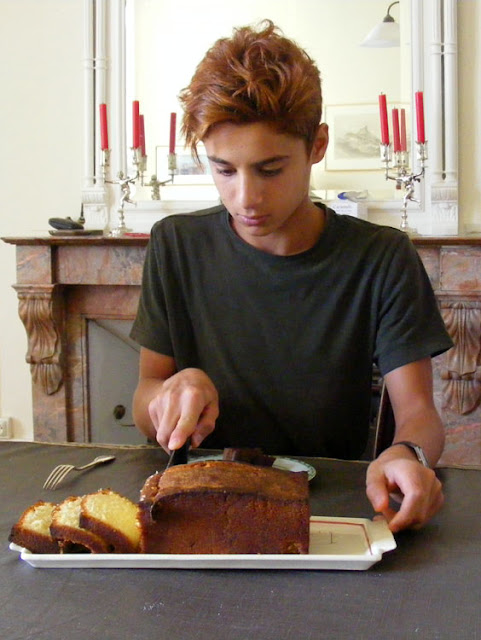 Enjoying the fruits of their labour. 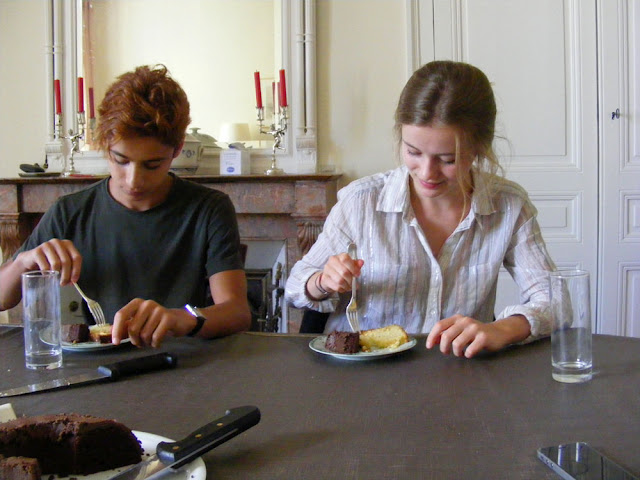 Somewhat to the boys' chagrin, everyone except them liked the Lemon Drizzle Cake best. The Chocolate Sponge Cake was extremely sweet.

The less than Clandestine Cake Club..... looks like fun! That drizzle looks to have had a really nice texture....

Such a sweet post (no pun intended!). Learning English, or any foreign language, in apprendre en s'amusant.

The Lemon Drizzle was very good.

Cooking works well because you can talk while doing it, and it's in the comfortable environment of home. The swimming pool was equally popular but hopeless for speaking English because everyone was too busy swimming, and it was a bit public so even when we played games in the pool it seemed a bit weird to speak English.