Lockers for cyclists at the artists colony, Turquant. 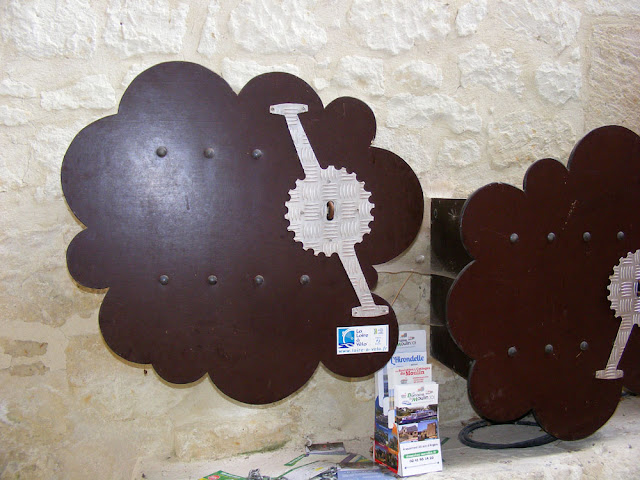 “In politics, one can learn some things from cycling, such as how to have character and courage. Sometimes in politics there isn’t enough of those things.”
Guy Verhofstadt

The cycling politician I've quoted above is the Belgian chief Brexit negotiator for the European Parliament. Frankly, it is him and his French counterpart for the European Commission, Michel Barnier, that we are relying on to protect us. The British government clearly doesn't give a toss about us, except where they can use us as bargaining chips to manoeuvre in terms of EU citizens living in Britain.

My British member of parliament (a longstanding Labour member) no longer responds to my emails. In contrast, Elmar Brok, on Verhofstadt's steering committee sends personalised responses within 48 hours.

For an idea of how the British government is prepared to treat EU citizens in Britain, read this Guardian article.

The only thing I know about Brexit is that it probably is a huge mistake on the part of the British voters. Important decisions like this one shouldn't be let to the whims of an uneducated populace. When is Scotland going to secede?

I should have added, democracy at its best!

If the majority of voters don't decide, who does? Technocrats? Partisan politicians? Dictators?

I remember when I went to work with you at USIA, you asked me where and when the English-language version of the Académie Française met to decide what was correct or allowed in the English language, or incorrect and not allowed. I told you there was not such body. You asked me then, who decides what is correct or incorrect. I say, we all do. It's a negotiation. I guess George W. Bush would have been a good president of the Académie Anglaise.

Except of course that in the case of Brexit, the referendum was advisory and referendums normally set a 60% majority rule. The vote was very close, and about 4 million people who are directly affected were not allowed to vote (Europeans in Britain, Brits who've lived outside of Britain for more than 15 years).

Part of the problem with the negotiations in this case is that we are bargaining chips. The EU can't offer us more rights than we already have because that would be more rights than Europeans living in their country of citizenship. Despite the EU negotiators from the very beginning being very clear that Europeans in Britain and Brits in Europe should not suffer any inconvenience, the British have not agreed immediately and up front to the protection of EU citizens living in Britain, and so there will be a corresponding push back against Brits in Europe (most likely that we will lose Freedom of Movement). Little did any of us know when we moved here that we needed an extra line in our risk assessment sheet that read 'Brexit'.

Look what a catastrophe happened in the U.S. last year. DT lost the popular vote by four million, but won the presidency because of our antiquated electoral college system.

As for Brexit, now people from the U.K. will have to go through the same immigration process that we Americans and, for example, Australians have to work through to get visas and residency papers. You also have to show that you can speak French...

Indeed. All very tedious and expensive. As for the speaking French it depends what you are applying for and what age you are. Over 60s don't have to demonstrate language skills for CdS, others applying for Carte de Séjour need to be functional to the extent they can hold a reasonable conversation with the civil servant who interviews them (my A2 level should get me through for example), applying for nationality you need to have done a formal test and prove B1 level minimum.

As home and business owners, I'm sure you and Simon will be "grandfathered" in by the French authorities.

I doubt if we'll be thrown out of France, but I do think it is possible we will lose Freedom of Movement. We need FoM if we are to stay here long-term, because without it we can't claim our Australian pension. Lots of other people need FoM for all sorts of reasons (frontaliers being the most obvious example). Everyone's situation is different and it's going to be really easy to find you've fallen down a crack in the new arrangements.