Tourangeau writers as portrayed on the chalet at Chanceaux près Loches.
On 8 August 2017 local celebrity Gonzague Saint Bris was killed in a car accident in Calvados. The newspapers were full of it and the Touraine in shock, not least because it happened just before his long running annual book festival at Chanceaux près Loches is due to take place. Referred to by all the locals by his first name, the funeral service at Saint Denis in Amboise was packed and overflowing according to friends of ours who live close by. By contrast, the interment was private and family only. When we visited the family grave there were wreaths from the great and the good in abundance (Carla Bruni-Sarkozy is one I recall, but there were many more). 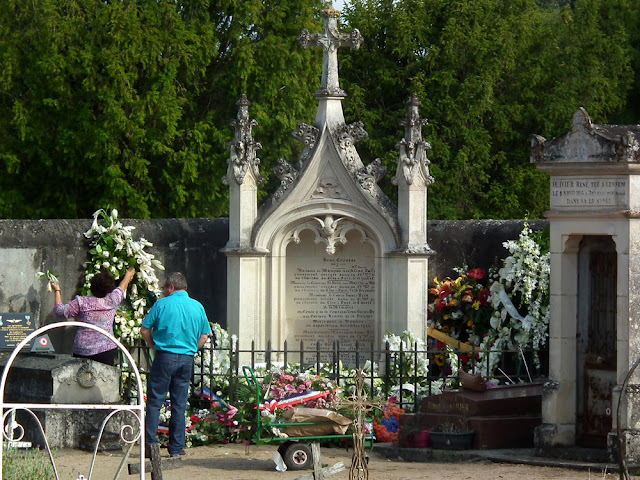 Born in 1948 in Loches, the son of a diplomat, he became a writer, publishing novels, histories and many biographies. His family had made their fortune as foundry owners in the 19th century and in 1855 they bought Clos Lucé, which is where he grew up. Self-taught, he became a journalist and radio presenter, then director of strategy and development at the famous French publishing house Hachette and head of the Ministry of culture and communication. He became a women's magazine proprietor and the royal correspondent for Paris Match. In 2014 he recreated the journey across the Alps made by Leonardo da Vinci on the back of a mule in 1516, after he was invited to come to France by François I.

The chalet at Chanceaux près Loches. 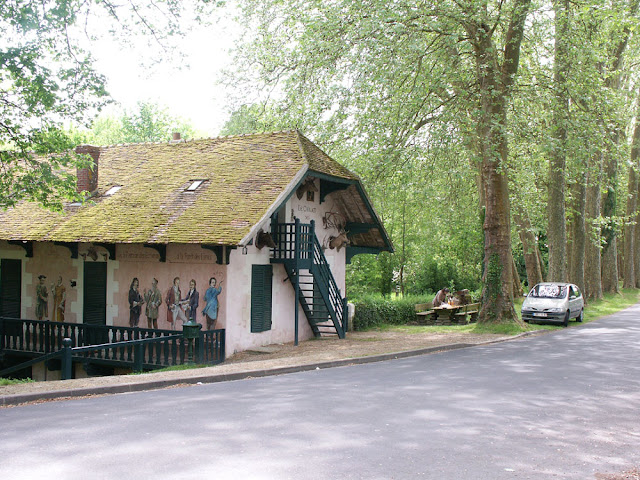 At the time of his death he was best known locally for the literary festival known as La Forêt de Livres, held annually in the tiny hamlet of Chanceaux près Loches for more than 20 years. The festival is free to all, hosting 150 authors who are there to promote their latest books.


Detail of the facade of Clos Lucé. 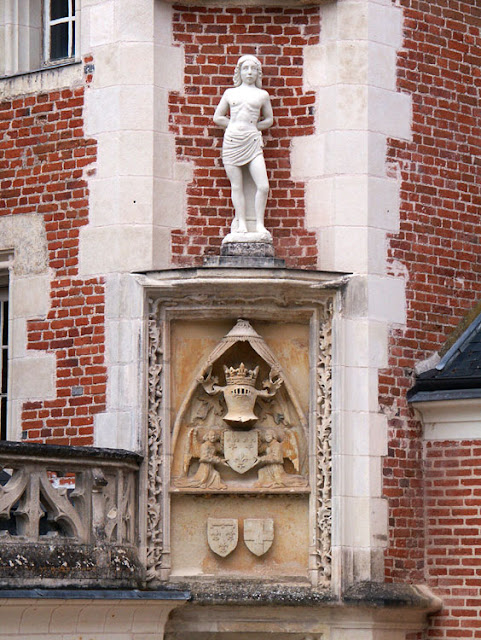 He died in a car accident near Pont L'Eveque earlier this month. The car was driven by his companion Alice Bertheaume, late at night as they returned from a party. She swerved to avoid a wild boar and hit a tree. Both of them were thrown from the car. He was killed instantly, she is still in hospital, in a critical condition.


Leonardo da Vinci as depicted on the chalet. 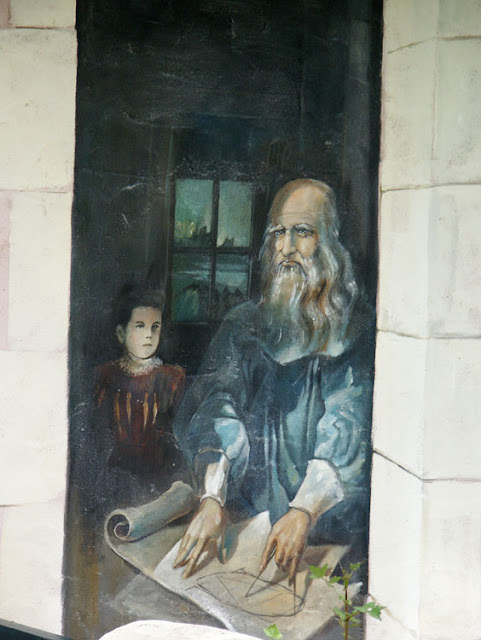 La Forêt de Livres will be going ahead, and his brother continues the family occupancy and presentation of Clos Lucé to the public. Gonzague never managed to get elected to the Académie Française, but I suspect he was that rather undervalued creature, an enabler. Locally he seems to have been widely liked and appreciated for his loyalty to the area, and he brought a great many people together to enjoy the literary arts. I never met Gonzague, nor went to the Forêt de Livres, but I have been struck by how people have responded to his death -- perhaps rather sentimentally parochial, but genuinely mourning the fact that he is gone from their lives.

For years, Walt and I enjoyed seeing and listening to GSB on TV shows about French history and culture hosted by Stéphane Bern (Secrets d'Histoire) and others. I just learned that he wrote a book about Michael Jackson a few years back. On Youtube there's a video of an interview about it that he gave to TV Tours.

All I knew about GSB was the festival. I’m sorry to hear about his death.

That little village came as a surprise the first time we saw it. We were just driving through and noticed first the allee, then the chateau, the chapel, the chalet, and at that time there was a restaurant with tables under a wide, low tree. Any time we’re in the area we go back there. I think my latest photos show some mythical figures on the chalet that weren’t there on our first visit.

Susan and Simon, in the US the word “enabler” has negative connotations, which I’m sure you don’t mean. Can you explain?

I looked up enabler, which seems to have both negative and positive connotations in psychology speak. I meant someone who brings others together in a way that enhances their potential and allows them to network, a facilitator, someone who empowers others.

Stéphane Bern is someone I always think we should watch more of. We ran into him once filming in Loches. I'm always surprised how popular he is -- way too smiley to be considered a serious person by most French people I would have thought.

Susan, that puts it very well. Thanks for indulging my finickiness. Here in the US the negative connotation of the noun now prevails, unfortunately.