In many rural communities in France, town water that came out of a tap in your house didn't arrive until the 1960s. Prior to that, laundry was done in big copper boilers that you filled from the well and at the communal lavoir (laundry shelter) on the river.

Lavoir at Marcilly, fed by a spring. 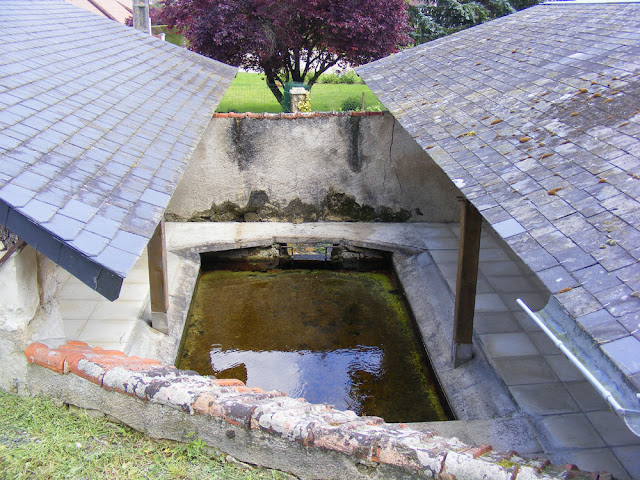 Lavoirs could be as simple as a shelter with washing slopes on the river bank, or they could be a much more complicated arrangement, with wood fired coppers, hand operated water pumps and stone troughs under one roof. By the 20th century large items such as sheets were boiled with grated savon de Marseille (pure soap) in a wood fired copper if you had access to such a thing. Alternatively, if you had a trough, you could soak items in a lye solution, which in the 19th century and before, could have had ash and urine added. Real soap was expensive, so you generally only used it on stains. Also soap tended to be more common in areas where wood (for ash and lye) was not the usual fuel stuff. Here in the rural heart of France, soap would have been a bit of a luxury until the 19th century. Lye along with sunshine acted to bleach and whiten white cloth. 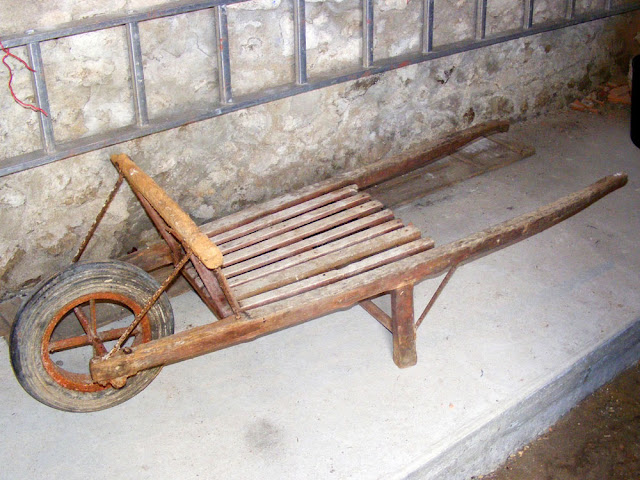 After soaking or soaping the wet laundry was fished out with a pole and dumped onto a specially made wheelbarrow for trundling to the next stage where they were beaten with a bat and rinsed in the river. The lavoirs usually had washboxes in which you knelt to keep your skirt dry and washing slopes for scrubbing on. The laundry might be started at home (especially if you needed to deal with stains) and just rinsed in the river, or dirty washing brought to the lavoir and the entire process done there. If you had access to a copper you might add laundry bluing (which often contained starch) to your final rinse, to brighten and starch your items. Starch requires boiling to dissolve and items could be blued and starched simultaneously or consecutively.


Lavoir at Chédigny, on a small stream. 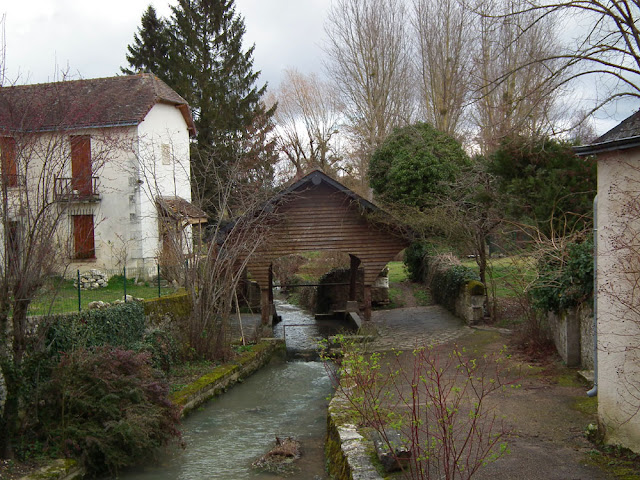 Once your laundry was soap free at the lavoir you asked a friend to help wring them out then they were plonked back on the wheelbarrow and taken home where they were run through the mangle and hung on the line to dry. By the 19th and 20th centuries, washing was a weekly event for most households. Prior to that it was much less frequent as it involved so much work.

What about the use of Soapwort.... every household used their soapwort plants!!
I don't think you get what soapwort was about at all.....

My mother tells me about "blue mondays" in North Carolina in the 1930s and '40s. That was laundry day, and the clothes were washed in big tubs over fires in the back yard.

Oh, and my grandfather's sister, who lived on a farm in South Carolina, still had a hand-operated pump in the kitchen, with a dipper (une louche) that everybody drank out of.

I can't find any account of women using soapwort at the lavoirs or in coppers at home in France. It seems to have been used to wash oneself, especially hands, and in textile production, for fulling and whitening wool and lace. Its use is somewhat problematic in lavoirs I would have thought, as it is toxic to fish.

We had a copper tub that you lit a fire under in a 'brewhouse' at our house in London, but I don't know when it was last used.

We had a separate drinking water tap in the kitchen as late as the 1970s on a farm, but I've never lived anywhere where you had to pump by hand.

Our first trip to France was so long ago that women still washed clothes at lavoirs. We saw it first in Josselin. A woman camping next to us assumed we'd be doing the same and recommended savon de Marseille. But we found laundromats in Paris and elsewhere in France. I think we only had to use lavoirs in north Africa. We still pull over when we see a lavoir in France but not to wash clothes.

I have other friends who can remember coming to France in the 60s and seeing women at the lavoirs. Soap would have been widely available by the 20C.

It wouldn't have been used at the lavoir.... the mashed root was used in the copper.... my gran used to use a hunk of soapwort root when hand washing her 'delicates'.... and her copper was used post-war for the sheets and whites.
I have a copper here that is destined to do the boil for home-brews....
that has been converted for Natural Gas.... so early Seventies it must have still been going.
My bro' had a superb built in gas-fired copper in the outhouse of his place in Lincoln... and a not so good coal-fired one in the same building in Swaffham... by both outhouses doors there was a soapwort.
I doubt whether a thought was given to the disposal of the liquid from the coppers.... the Norfolk one vanished towards a grating in the floor.... the Lincoln one drained into a channel that led to the dry moat of the Castle.
And as for the lavoirs, do you think anyone gave a toss as to what went into the river system.... that's all new stuff!!
I grew up with a single electric tub that did the hard work of washing.... but still had to be filled with piping hot water from the tap, via a rubber hose.... and my job, until we got a Hoover Twin-Tub.... was to wind the mangle as my mum caught the clothes and put them in a tin bath to take out to the line!

I remember the "blue bag" of cobalt blue to whiten the laundry.... my gran's and my mum's wooden wash tongs were blue tinted at the ends. I used to enjoy fishing for the little blue bag and putting it back in the glass jar it called home....

We can't assume that because soapwort was used for domestic laundry in England that it was in France. There are differences in practice, for example, washboards were not used here, they are an anglo thing. I agree that the consequences of the disposal of waste water would not have been much thought about. Even if not used at the lavoirs, the fulling mills were all on rivers and would have been contaminating the water.

Your description of your grandmother's practices is really interesting.

I should add that Gran never had a washing machine....the copper, free-standing like the one I have, plugged into the gas main in the same fashion as a gas poker.... but the hose was barebrubber, not metal covered. Everything else was done in her twin 'stone' sinks... from white to dark in the same water.... she never had a washboard.... the first time I came across one was in a folk club. She used the wooden drainer to scrub stains on.
I remember all this because we went to hers every Saturday to give my parents some time alone.... for her, Saturday was always wash day, so that things had time to dry for Monday.... and I used to wind the mangle for her, too.
Hers was free standing, huge and cast iron... except for the rubber on the rollers.... but the gearing was fantastic.... even me, at five, could wind that handle!

And thanks for jogging my filing cabinets....

Communal laundries were not uncommon in cities in Britain, until within living memory. And the old song "Dashing Away With the Smoothing Iron" takes it for granted that it took most of the week to finish the job, at least in the pre-machine age.

'Dashing away with the smoothing Iron' isn't currently in my repetoire. I'll have to look it up!

I remember wash days when we lived with my grandmother in the 50's. She heated water in a copper boiler and sloshed the laundry around in a ribbed metal tub called a dolly tub, using something called a ponch which looked like a small footstool on the end of a broom handle. Then it went through the mangle before going on the washing line. All very hard physical work.
By the early 60's she had a single tub electric washer which did the sloshing for her.
How we take our washing machine for granted! Not only does it do the hard work, but we can get on with life while it's doing it!