One of the things that struck me about the Grand Défilé (Grand Parade) of the recent Comice Agricole (Agricultural Show) was how many people got smartly dressed to attend. They were also nostalgic, happily reliving a social occasion they remembered fondly from their childhood. Lots of people my age and older reminisced about Comices in the past.

Mid-afternoon of the great day we got a knock at the door. It was Gérard, who grew up in our house, and his wife Marie-France. They were in town because they wanted to catch the Grand Défilé, and they had brought Gérard's sisters to meet us and see what we've done to the old place. It was fascinating hearing the three of them discussing what they remembered and how the rooms were laid out. 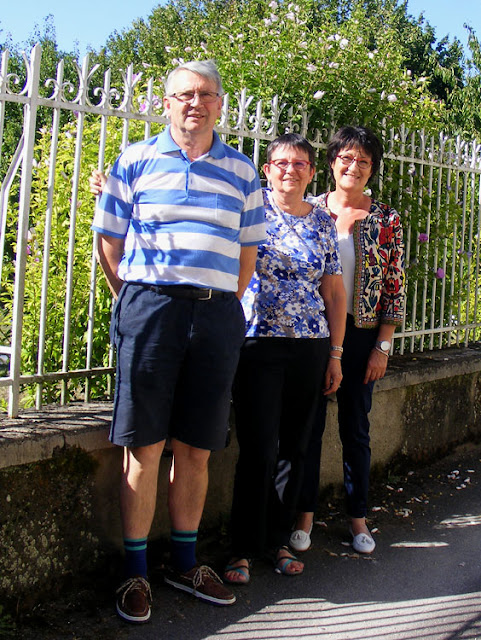 There was a minor argument about where the kitchen stove was, but it was eventually established that Gérard and Claudette were talking about two different stoves. He is older than the girls and remembers more. He remembers for example, when our laundry had an external door. It was wrought iron and always locked. He can't ever remember it being used. Claudette could remember the big table that sat in the middle of the kitchen. Their grandparents employed a number of men and in those days everyone ate lunch together around the big kitchen table. Claudette reckons it was about eight people every day for lunch, which I assume her grandmother produced.

Their family also owned our neighbour's place and they can remember the linden tree in their back yard being planted, so it's about 50 years old. Apparently it used to have a companion.

After the visit Claudette emailed me a copy of the deed when their grandparents purchased the property. It dates from 1900, and we will have to pour over it to extract all the interesting little tidbits of information it doubtless contains. Gérard is vastly amused that one of our Tractions is called Claudette. She was named before we even knew of his sister Claudette's existence, but she is chuffed to bits to have a namesake in the garage.

Very nice. What a treat to get information and memories like that about your place. That's a nice image of the big table in the middle of the kitchen with eight people around it, and grandma's cooking.

Grandma was a formidable character, much more so than Grandpa by the sound of it. Anyone at the lunch table would have had to mind their ps and qs.