The local newspaper had an article yesterday about farmers' concerns regarding recent national budget cuts to grants made through the Common Agricultural Policy (CAP, or PAC if you are French). France has the most land under agriculture of any of the EU countries, so the CAP is particularly important here. Local farmers union members called an on-farm meeting with our local representatives in the National Assembly to get their point across. 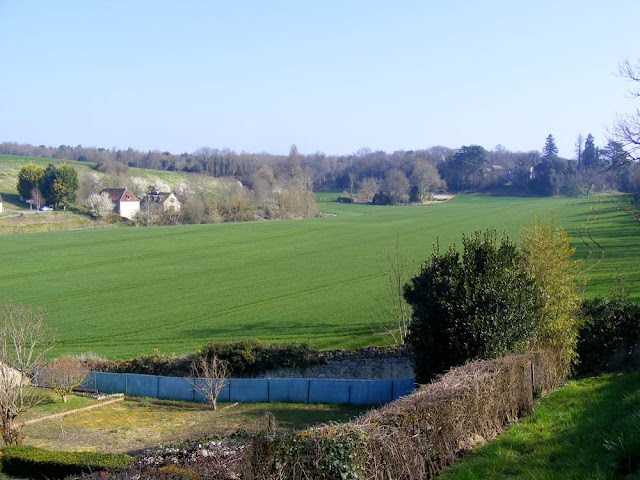 The farm near Sepmes that they meet on runs dairy cattle and grows grain which is used to feed the stock on farm. The farmer is a young woman of 30 who is in the process of buying the business from her former boss, an older farmer who is retiring. The hand over period is three years. The farm is 60 ha with 70 dairy cows and maize cultivation, partly irrigated. Under new rules just announced the new owner will not receive €6500 that she had hitherto been expecting as a grant to aid the transition. In addition, there has been a major redefining of agricultural areas considered to be 'disadvantaged' and she will lose nearly as much because of being recategorised.

A local dairy farm (photo courtesy of my father). 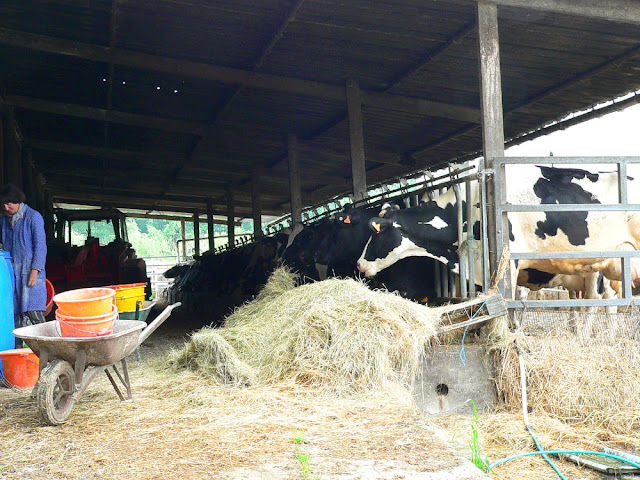 The reason for the budget cuts at a national level are because of an EU decision to shift 4.2% of the CAP budget from direct farm payments to the more general aim of 'rural development'. These two types of payment are known as the 'twin pillars' of the CAP. In the past the direct farm payments have been aimed particularly at supporting the markets and protecting the incomes of farmers. The new focus is looking more towards the environment and farmers are having a hard time swallowing it. The farmers union is at pains to point out that it is not just graziers who will lose out, but, for example, a cereal farmer with 150 ha will lose €1300 a year under the reforms. The farmers are also not happy about the new boundaries outlining the disadvantaged areas. The Touraine du Sud (that's us and the area around Loches) is 'disadvantaged' but the Sainte Maure plateau (where Sepmes is) is not. 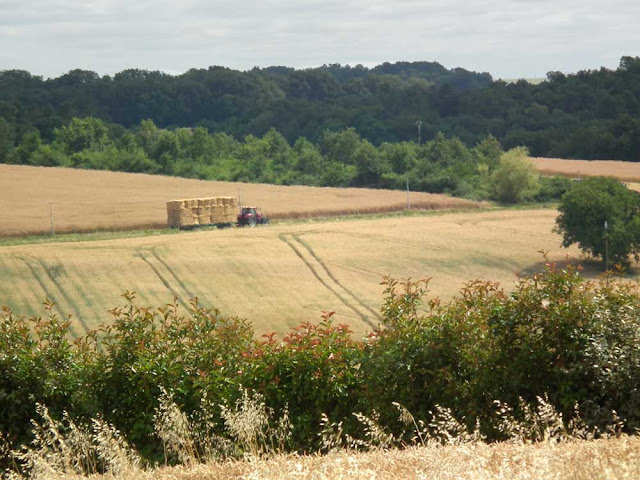 The reforms have been pushed back a year and the farmers are determined to make the most of the repreve. But the clock is ticking. One dairy farmer pointed out that when he started out there were ten dairy farmers in the immediate area. Five of them remain today and there will be no more than three in six months time. 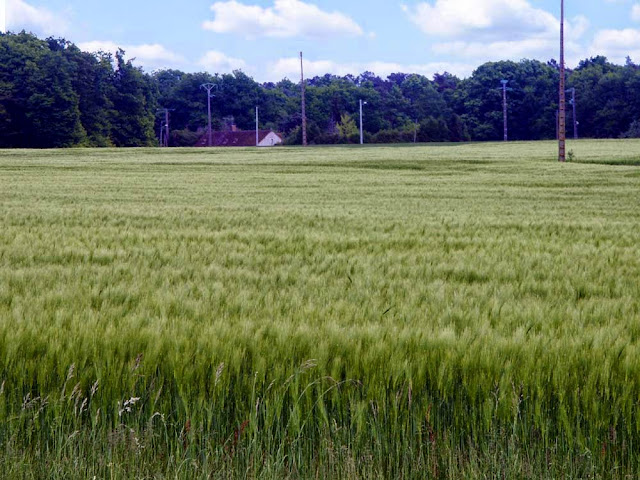 On one level I sympathise deeply with these farmers. I know they have long term plans that have been scuppered by this change in government policy and they are struggling to see a way forward. But the truth is the CAP direct farm payments are a really blunt instrument. Essentially farmers are paid for just owning the land, and the more they have the bigger the grant they receive. My local organic market gardeners and orchardists have very little land, and receive very little in the way of EU grants. On the other hand, the big cereal farmers are getting tens of thousands every year, and choosing to ignore the environmental damage they are causing. 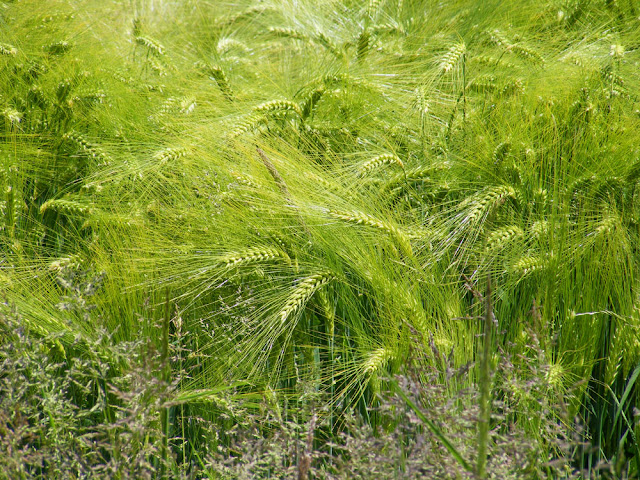 Modern agricultural practice is having a huge impact on our environment. It ruins soil quality (by heavy machinery and deep tillage), water quality (by runoff of pesticides and excess nutrients) and air quality (by creating a toxic mix of ammonia from manure and diesel fumes). The CAP is currently not set up to adequately deal with these issues. Something must change, and farmers must be incentivised to change how they do things.

There is a myth around deep tillage.... the vast majority of farmers just don't! It is needed from time to time to avoid or break compaction.... but, bringing deep soil up always has a negative effect on soil quality.... especially where the soils are shallow.... as evidenced by the "white" fields we have around here.
Much of the time they turn only fifteen to twenty cms max.... and, I noticed the other day, a new system of top cultivation by a powered harrow at the front of a tractor breaking up the soil... the seed drill was mounted on the back.... and it was towing a roller to firm the soil down. He also had some of the widest tyres I have ever seen... front and back.... presumably to further spread the load.
Not to everyone's capabilities, but it is the way some people are going!
This was on topland fields near Abilly... going my own diversion past the roadworks on the way home!

In my experience the Farmers will do what they want to do, ignoring what the government say but hitting their pockets could cause some major upsets! We do like the disadvantaged countryside around your area!

Farmers grow a lot of barley, but what do they do with it? Or what do buyers do with it? What products do consumers get from it?

Yes, you are right. Things are slowly changing for the better, but one still sees hedgerows pulled out and machinery getting bigger and bigger. I don't like dissing farmers, but practices do need to change.

Yes. My interpretation is that 'disadvantaged' means mosaic, with lots of mixed activities, which is actually a good thing.

Need to change...and need to change fast....
The agriculturalists have forgotten that their clients are the custodians of the countryside....
OR CHOSEN TO IGNORE THAT FACT!
Pardon the shouting, please.... it just made me a bit ranty!

And grain to eat in France.... it is a major component of some of the Tipiak, and other makes, of "pour on boiling water" not-couscous type of grains.

Really? I haven't bought any for ages. I don't know how widely it's eaten to be honest. It's easy to get, which suggests a reasonable domestic market. It's interesting you rarely get that sort of thing in restaurants (some went through a phase of doing 'risotto' style cereal dishes a few years ago, but it seems to have died out again).

We use SuperU and Tipiak grains a lot... not tried it as a "risotto" addition.... might have to give that a try... Tipiak's Mili-Melo is perhaps the one we use most... just looked at the packet, it should work nicely.... thank you for mentioning it.... "orge'otto" is on the menu tonight.

We like soups with pearl barley in them, especially with turkey and turkey broth. Americans eat barley but I've never been served barley by anyone in France.

I don't think I've ever been served barley either. Spelt and wheat used like risotto rice in restaurants, but that's all. I've never found pearl barley for sale in France. We get English friends to bring it over and use it in winter beef stews and suchlike.

Sold as Orge Perlée.... you'll find it on the Bio shelves.

We buy orge perlé here. Not sure where — maybe Paris Store in Tours Nord. Or at Grand Frais.

OK, thanks for that. I will look for it.