The Wolves of Amboise 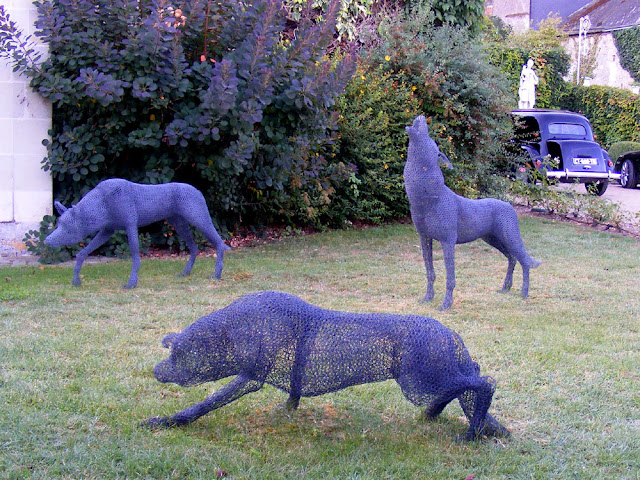 These rather good chicken wire wolves are by the sculptor Amandine Bocquelet. They were on display until the end of October at Le Choiseul, a hotel in Amboise and are for sale at €950 each.

Real wild wolves were eradicated in the Touraine in the very early 20th century. Despite the reappearance of wolves in the mountainous areas of France, it is unlikely they will ever return in the wild to the lowland areas like the Touraine.

Vote for Weeds: A local nature conservation organisation, the Société d'étude, de protection et d'aménagement de la nature en Touraine (SEPANT) is currently focusing on arable weeds (les plantes messicoles). This group of plants -- which includes poppies, cornflowers and corncockles -- is greatly at risk due to modern farming methods and my friend the botantist Dominique Tessier has set up a conservatoire on his farm on behalf of SEPANT. The project is competing for a grant of €1000 from the food supplements manufacturer Atlantic Nature. For SEPANT to win the grant they must get the most votes. You can vote every day until the end of the month ie each individual can vote once every 24 hours.

Voted and they are well ahead.

I know, but we can't rely on that Bouches-de-Rhône lot not getting their act together and mobilising their voters. To be honest, the other project is equally deserving and I feel a bit guilty about not voting for them :-)

Cast my vote from Texas. Trick is to remember to vote again in 24 hours and thereafter.

P.S. If I had lots of money I didn't know what to do with, I'd buy that howling wolf.

Err...doesn't that mean your votes will just cancel one another out?

Voted.
They have some enormous wire sculptures in Uttoxeter. I'll take a pic one day.

They'd be good to see. I saw some photos of wire monkeys at the Tower of London the other day, harking back to when the place was a menagerie.

Those wolves are mighty. Wish I could see them up close. Thanks for the photos

She also had lions in another part of the grounds.