On the last fungi foray to the Forest of Preuilly we didn't find much, but we did find a number of species with distinctive scents. 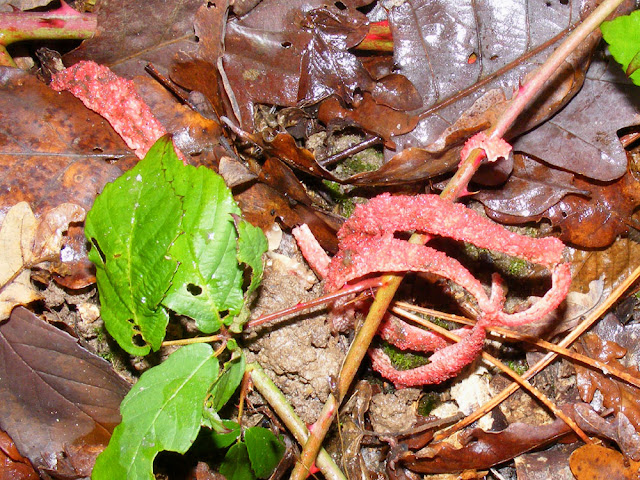 This species, introduced from Australia in the early 20th century, has colonised the forest and is easily found by its stench of rotting meat. Sometimes you can smell it while standing nearby, but usually its pong only impacts when you get down on hands and knees to photograph it. 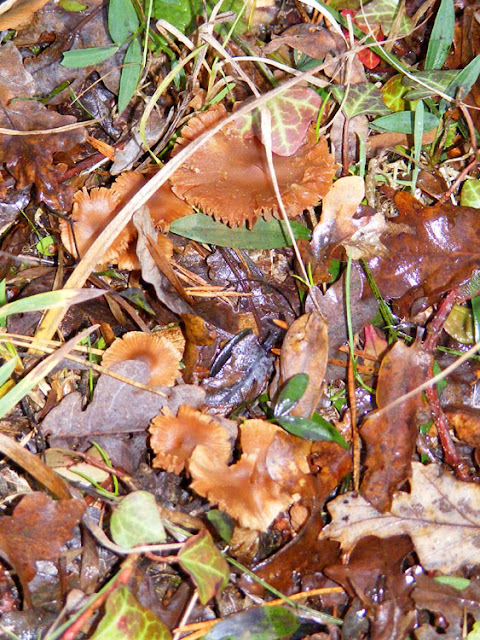 This nondescript little webcap had a light but definite geranium scent. 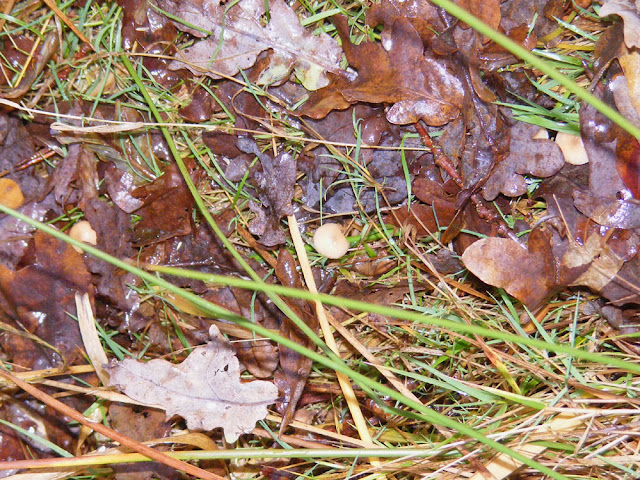 Another nondescript little toadstool, and this one really packs a punch. It smells strongly of garlic, and even its mycelium must smell of garlic, as we couldn't see many fruiting bodies, but the more we walked on this patch the stronger the smell of garlic became. The soil must be completely riddled with the fungus ready to burst out as little cream mushroom caps.


No fungi to be seen, but this whole patch smelled of garlic. Extraordinary! 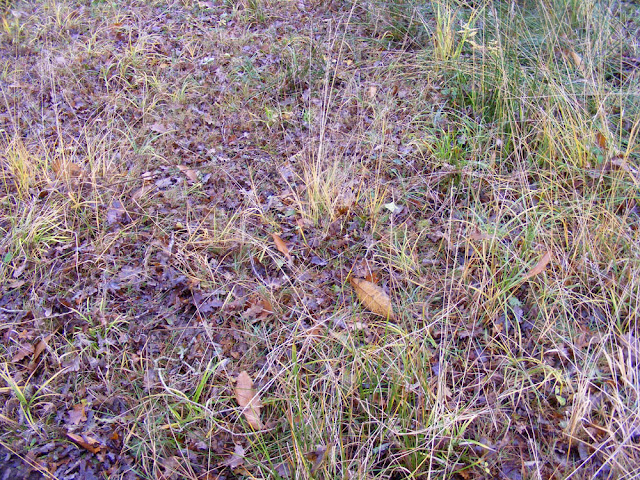 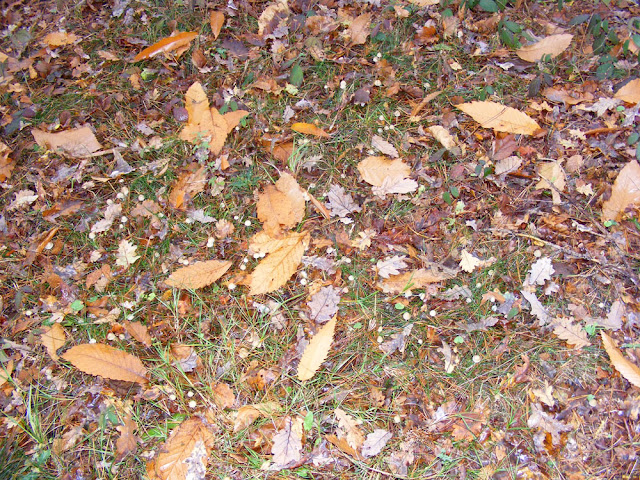 Nitrous Bonnet is very common amongst the leaf litter of the forest floor. So are several other very similar Bonnet species. Luckily, if you just pick a couple and sniff them you can usually tell if you've got Nitrous Bonnet or not. This species smells of bleach, often quite noticeably. It's not the only Bonnet that smells of bleach, but it's the one you are most likely to encounter in the forest. 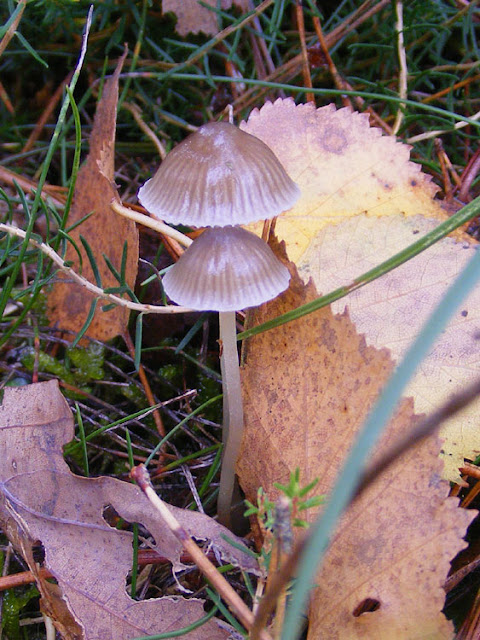 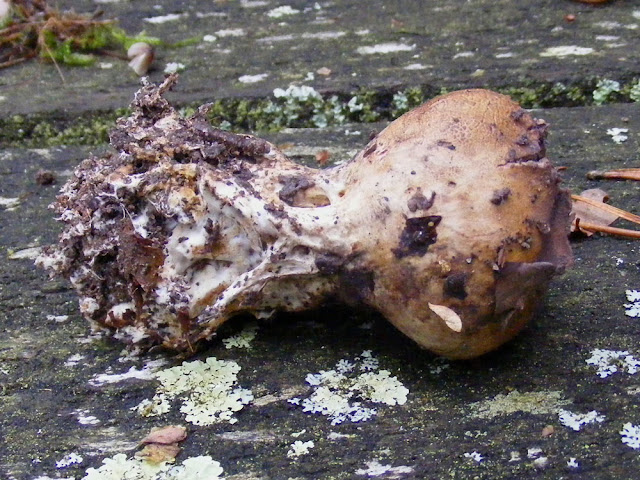 The one above on the table hasn't yet burst its top to explode its spores all over the place. The ones below are completely open and full of grey powdery spores like ground pepper. You can see the dusting of spores on the leaf litter all around the fungi. Earthballs don't pong quite as much as the Devils Fingers but they are definitely noticeable when you get down close to photograph them. We couldn't pin these ones down to a species, except to say that they are not the common species. 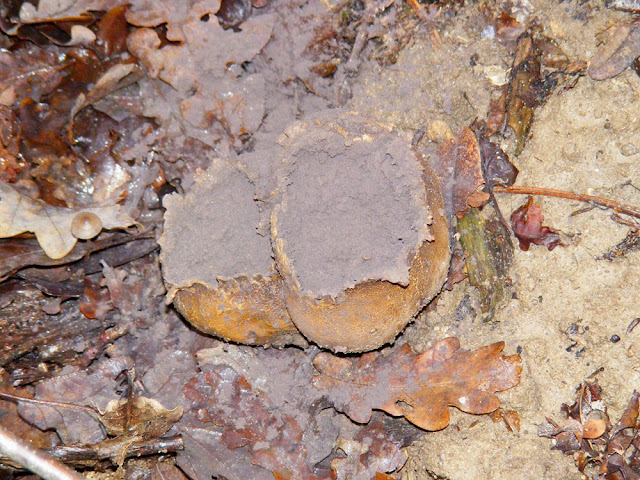 These fungi were all photographed on 13 November in the Forest of Preuilly.

A la cuisine hier: Thin pizza made on a base of a Turkish flatbread, spread with tomato puree and topped with anchovies, olives and leftover mozzarella cheese.

Brioche buns from the boulangerie.

I've brined a piece of rolled pork loin. I bought a pack of two and made one into orientalish soup. The other I soaked in a light seasoned brine for a couple of days. I don't know what I'll do with it yet. Suggestions welcome.

Split pea soup, a classic British winter dish, from stock I had previously cooked a demi-sel pork hock. The split peas were green (yellow ones don't seem to exist in France). I added potato, celeriac, carrots and onions, all pureed together then squares of crisp thin back bacon as garnish.

Herb pork sausages (bought from the supermarket, so the butcher didn't get a chance to do his joke about how they contain marijuana) with mashed potato (from the freezer) and peas (also from the freezer, but not homegrown). A bit of ketchup on the side.

For your brined pork, I suggest one of my favorites, haricots rouges au petit salé ou au lard fumé, that is red beans with salted or smoked pork. For the smoked pork you could add some Lapsang Souchong :-)

Good thought. I was also thinking along the lines of a traditional petit salé, with lentils, but red kidney beans would make a change. And I'm already ahead of you with the Lapsang Souchong -- it was in the brine :-)