All three of these things were photographed at Chez Les Filles, a bar in the village of La Borne, near Henrichemont. La Borne is home to dozens of potters and ceramicists, and has been since the 12th century, due to extensive clay deposits in the area. I visited with friends on a Sunday in September, and this being France, none of the potter's studios were open, so we went to the pub. 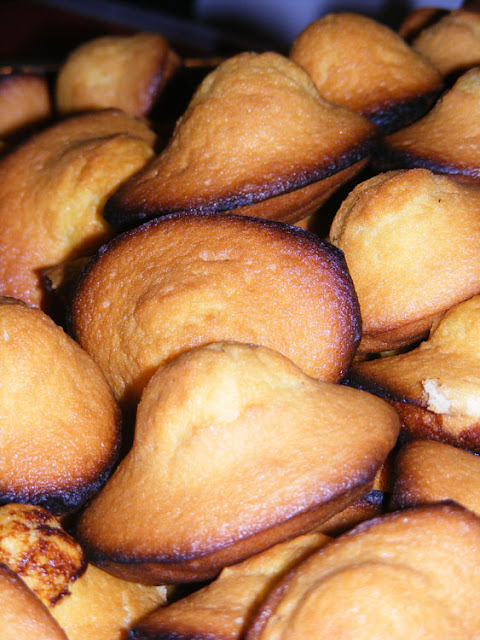 These little oval cakes made in scallop shell moulds come out with their bases fluted and a bump on top. They were made famous by Proust and many French people genuinely adore them. They are not very sweet and rather plain. Do not under any circumstances eat them unless freshly homemade or artisanal. Ones from a packet you bought in the supermarket, even in France, will be such a pale shadow of what a madeleine should be that you really must not poison your mind or body with such a thing. 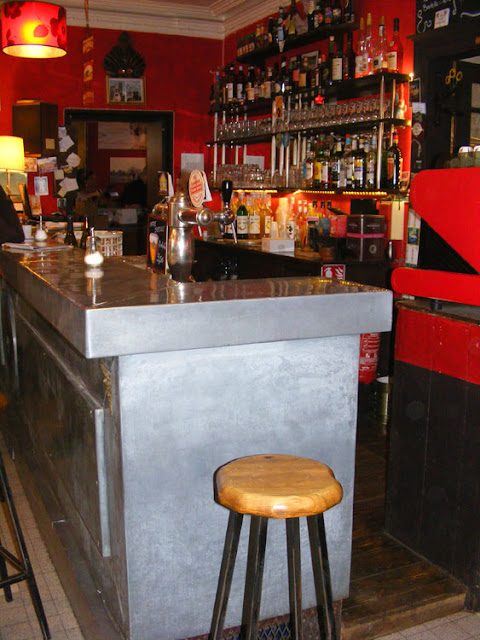 Bars in the old days were commonly covered in pewter, known in French as zinc (pronounced 'zaing'). 'Le P'tit Zinc' is quite a common name for a bar here. The zinc on this bar does not appear to be old, nor does it appear to be pewter (galvanised, ie zinc coated, steel is a common substitute these days), but it is beautifully done and creates a real sense of style. Zinc bars were made famous by Zola and later by Hemingway. In their day, a bar zinc was not an overly salubrious drinking spot. Apollinaire puts it thus: 'Tu es debout devant le zinc d'un bar crapuleux, Tu prends un café à deux sous parmi les malheureux' ('You are standing at the metal counter of some sleazy bar, Downing a coffee or two amongst the malcontents', from the poem Zone, translated by me, with a nod to Donald Revell). The metal countertop protects the wooden bar from spilled drinks, and it wipes clean without staining. Pewter is an alloy which contains varying quantities of several metals, such as tin, copper, lead and antimony. It is malleable so can be pressed into decorative moulded edges and around curves, and can be buffed to a silvery shine if you want a more upmarket look.  The stuff is also used on the exterior of buildings, as the flashing around slate roofs to ensure the angles between roof and masonry are sealed, to protect wooden or deteriorating stone windowsills and as smart decorative capping on gate pillars and the like. 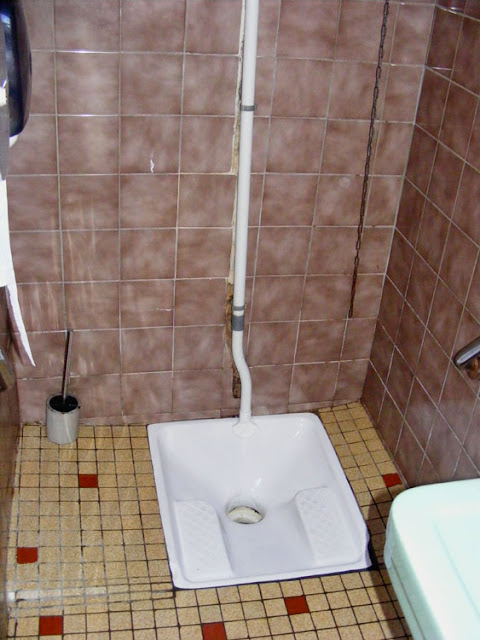 These squat toilets are slowly disappearing, but I know lots of places which still have them. They are a nuisance if you are wearing a skirt, wide legged trousers or don't bend as well as you used to. The floor of les toilettes à la turque are invariably wet as they always have ferocious flushes.

Yep one can be surprised by those à la Turque toilet. Once on our way from Dijon down to Orange , we stopped at done of the halt and thankfully the lady before me has warned me about the flushes. I was wearing Capri pants no problem but , since it was Summer, was wearing open-toe sandals ( thankfully Teva and no leather) . I made sure to be far away before I flushed. Still got wet.

Many who have visited France since the 1950s may vivid memories of the hole-in-the-floor WC, perhaps used in desperation because there was no alternative. Mine is a schoolboy memory of an example in St. Malo, which seemed OK, but which I foolishly flushed too soon. It was blocked and I was soon marooned on two islands, trousers down. Dilemma: jump for dry land, clutching trousers, or adjust my dress and risk inundation?

Well at least if it was summer you would have dried off again quickly...

So which choice did you opt for and was it the right one?!

Fortunately these à la turque are disappearing. Not too soon!

I jumped for the tiny margin of dry land and then adjusted trousers; but it was a precarious matter as the waters continued to rise. The excitement level reached a peak when I then wrestled with the door bolt, now standing tip-toe, needing then to hang on to the edge of the door as it swung open so as not to fall!

These things can be traumatising and etch themselves indelibly into the memory :-)

Some surprising places still have them though.

Yes, I agree. Still too many. I wonder what the situation is in Turkey where they're supposed to have originated!

Don't know as I've never been to Turkey. I've encountered them in the Far East and Spain though.

Ohhh yuk, this brings back memories of China in 1995, not very clean and the used paper was not flushed, just piled in the corner or a bin, as the whole system was very old and not able to cope.You soon learn not to wear certain clothes when you are away from your hotel.

I don't think I used a toilet outside the airport or hotel during Simon's and my brief stay in China. It was too cold and I was wearing too many clothes to be able to cope with a squat toilet!

To change the subject, I know of one (and for all I know it's the only one) zinc bar in London, in the Prospect of Whitby. And a local café to me has one in copper - I once found the manager shining it up with tomato ketchup!

I've been to the Prospect of Whitby. I don't remember anything about it though.

Worcestershire sauce is more normal for copper. So far as I know it's just because the acid neutralises the surface salts that form, so any mild acid solution should work.

Still have a few of those in Greece as well. Also called Turkish toilets. As you say they pop up in the most odd places. A hospital in Athens has them and so does one of the beach bars here. Definitely a reason to hold on and get home quick

They are toilettes à la turque (Turkish style toilets) here in France too. I think the idea was that they were more hygenic because only the soles of your shoes touch the porcelain. Obviously some people believe this because I have encountered footprints on the toilet seat in railway stations and airports a number of times in Spain and France.