In October I received a phone call from Tim B, asking if I own a soldering iron (yes) and if he and Colin could borrow it (also yes) as they were needing to repair Tim's oil burning furnace. The pump had stopped working and was carefully laid out in pieces on the dining room table, and as most of France was expected to arrive within two hours for Gaynor's legendary curry evening there was potential disquiet in the household.

When they arrived they found me in the middle of a frantic search for said soldering iron, of which I own two, and the tube of solder I knew was with them. As I couldn't find any of the items I knew they had to be together and had been "tidied", but they weren't in any of the usual places. Eventually I had to concede defeat, and Colin and Tim left to do tidying up (they borrowed a set of irons from Tim F, and finished the job - hoorah!)

Well - you can relax, because the mystery has been solved. Apprently, the last time I had used the soldering iron had been to do a running repair to a Traction Avant headlight bulb (as seen here), because the whole ensemble was in my box of spare brake light and indicator bulbs. 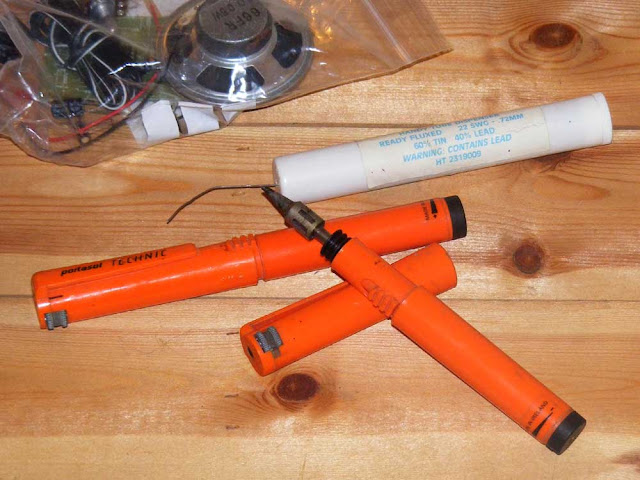 This is a good thing, because Tim B has sent me a kit to make a little amplifier. My plan is to get a 1960s or 70s radio that isn't working, and rebuild it as an entertainment unit to take on car club outings. At the moment I fancy something like a Panasonic leather cased trannie like this, but I may yet use a 1950s bakelite job along the lines of this beauty.

As I won't be spending any money on this project it depends what non working item I can find at Fabien's or at a brocante, so who knows what I will end up with! The project will start when I know what I will be fitting the amplifier to, and when my magnifying headpiece arrives.

Glad you found it at last... NOW make good use of it!!

My choice would be an Art Deco style radio like these. https://en.m.wikipedia.org/wiki/Washford_Radio_Museum

Perhaps the Emmaus sale at Chatellerault might have something. You'd need at least a couple of days to sort through the other assorted junk and treasures there!
Start thinking about your curry for next year's bash... :o)