Not strictly a t-shirt, and definitely not rock and roll. This is a souvenir from July/August 2005.

Back then I was at a loose end: funding for the project I had been engaged on in London had dried up, and a Chinese friend (married to a Korean) I had met in London emailed to ask if I had considered teaching English in Korea at summer camp. It doesn't do to think too deeply about questions like that, so naturally I immediately said yes. 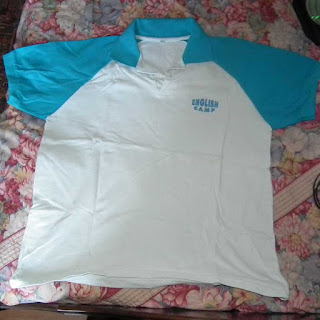 I really like Korea. I got on fabulously well with the food, the beer was cheap and plentiful (although you really want to be drinking "Cass" brand beer rather that "Hite", because Hite should have been taken as prescient rhyming slang). The people are friendly, especially when they find out you're English rather than the US citizens they are used to and can talk to you about football (or soccer, if you must), the scenery is amazing, the bookshops are huge, and there is always a new experience to be had.

One day I would like to return and spend some proper time touring as work was 9.00am to 4.00pm six days a week (not including lesson preparation time) which didn't leave very much time for exploring.

Loire Valley Nature: A photo of a flower infected by a fungus has been added to the entry on Soapwort Saponaria officinalis.

Rehome a Dog: Our French teacher Dauphine has recently moved house. Unfortunately this means she must find a new home for her lovely young English Pointer. If you are interested in giving a loving home to a young gun dog please get in touch by email (via my profile on the right side bar) and I will put you in touch with Dauphine.
Susan

A la cuisine hier: Cream of potato and leek soup from the freezer.

Simon made scones which were rather good. We ate them with butter and homemade blackberry, apple and white currant jam.

Simon's sausage and bean casserole from the freezer.

I made apple crumble and served with leftover homemade custard.

Au jardin hier: I spent the afternoon weeding a row in the vegetable garden. The weather is mild (enough so that I wasn't wearing a coat) and the soil not too wet. I also dressed the row with ash and marked orchid leaf rosettes coming up in the grass. The resident wren scolded me from the compost bins and the resident buzzard glided over at low altitude. A variety of insects were enjoying the rotting apple peels in the compost. Whilst weeding I uncovered a large black beetle larva and an equally large green caterpillar.

Just like you, Simon, I really enjoyed my stay for a month in Korea, only Seoul unfortunately, as a French translator for the Olympics Games in 1988.