A Quick Visit to the Chapel

My Cake Club friend Maureen told me that she has been fascinated by the Chapelle de Tous les Saints and its danse macabre ever since she arrived in the area in the 1990s. In the past she had asked people about it, but never got much information. She was delighted when I told her I could get the key and we could visit the inside.


Painted oak panels which have fallen from the ceiling and been stacked up against a wall. 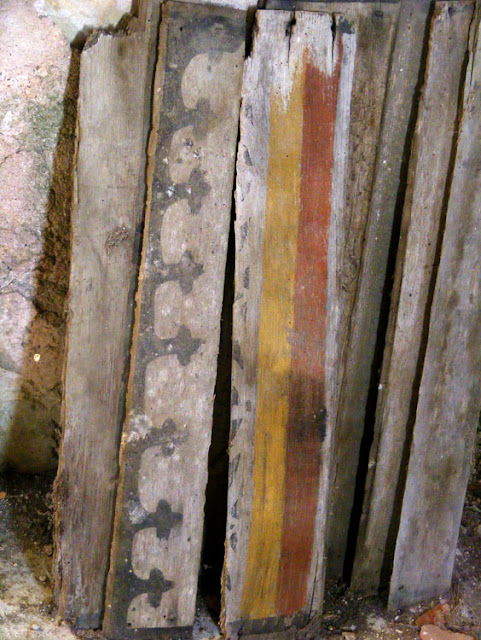 The light was rather good on Wednesday afternoon when we were there, so I took some shots of details of the brushstrokes on the wall paintings and of the decoration and degradation of the ceiling.


The ceiling, with big chunks missing and on the floor.
I noticed for the first time that the king post is painted too. 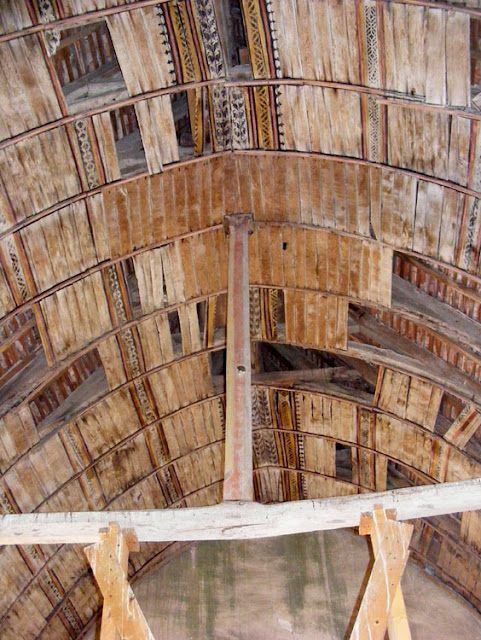 While we were there several random passers by who stopped to take a peek. One was Albert, who is Preuilly's retired postmaster, and is a member of the local history society, so knows all about the chapel. The next was a guy from the council who was checking for water leaks in the pipes under the street. The third was an elderly woman who said she had never been inside before.

This cadaver seems to have been filled in with red ochre applied with quite a dry brush,
but I'm a bit suspicious that it is 20th century 'restoration'. 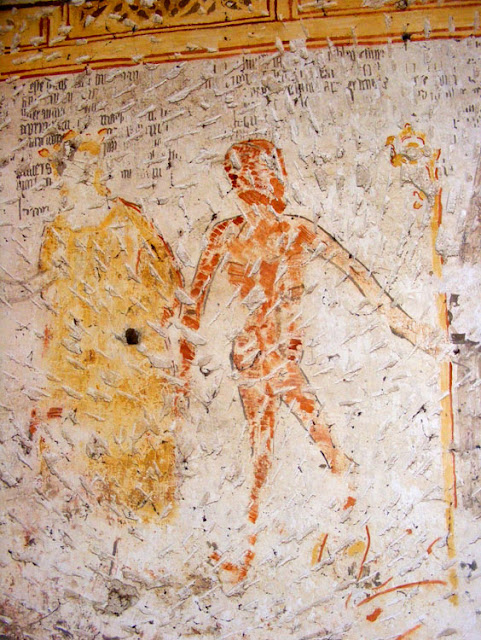 There are a number of other people that I am aware want to visit the chapel so I will be arranging something for early April. If you haven't already done so, let me know if you are interested by emailing me (via the link to my profile on the right side bar).


One of the best preserved of the women in the danse macabre.
You can see that the paint for her gown is not evenly mixed and has come out a bit streaky. 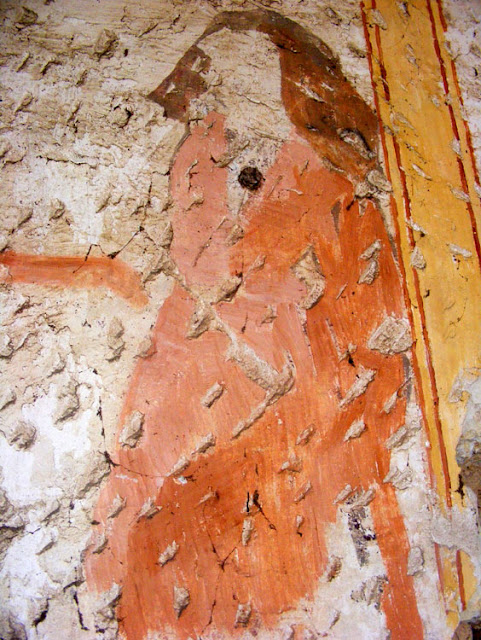 I'm pleased to be able to report that the fundraising account with the Fondation du Patrimoine has reached €7200. Many thanks to all who were able to contribute. Even donations of a few euros build up when lots of people help.

Loire Valley Nature: A new entry has been added for the toxic plant European Birthwort Aristolochia clematitis. It and others of its family are contenders for being the plants most likely to have caused the most harm to humans over the centuries, but I'll bet most of you have never heard of it. The story of how scientists in recent times learned how poisonous it was is both horrifying and fascinating.

Can the writings on the third photo be legible enough to make any sense? I guess it is probably Latin. This chapel needs a lot of tender loving care! Let's hope it gets it.

I don't think it's Latin. I think it's probably old French. Normally the text of the poem associated with the danse macabre is what you would see above the characters performing the dance. Because we know what it is likely to say I think it would be possible to work out a lot of it. However, much of it has disappeared just in the last 50 years. I've seen photos of the danse from the 1950s and the text over the women is visible. Today when you look at the walls you would never realise it was there.