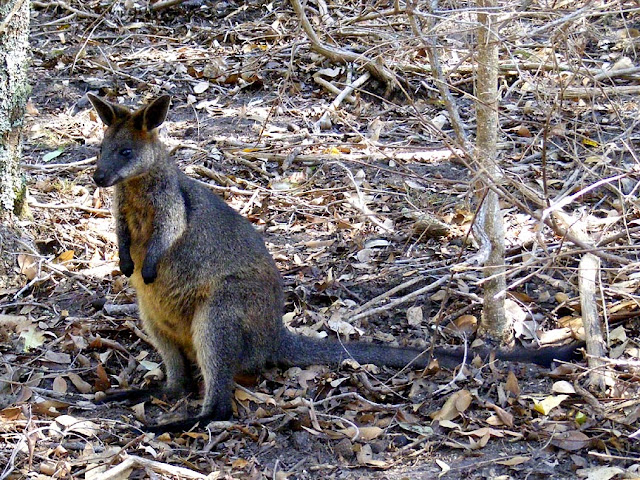 Black Wallaby Wallabia bicolor, also known as Swamp Wallaby, is common on the east coast of Australia. They live in dense forest undergrowth. Weighing about 15 kg and 75 cm long (plus another 75 cm of tail) their gait is rather more horizontal than other macropods. They browse a wide range of plants, including some which are poisonous to most animals. Luckily for it, the fur is coarse and its flesh has an unappetising smell, so it is not hunted.

Our posts on Sundays have an Australian theme. If you would like to read more click here.

Agriculture in the News:  Yesterday I was watching the news and there was an article about how poor the year had been for farmers in France and Belgium this year. They interviewed a bunch of farmers who said that their yields were way down due to the weather. Those that relied entirely on cereals were down about 50%, those that had multiple strings (eg potatoes, beetroot) to their bow fared better, only being 25% below normal. Everyone has experienced low yields, low prices and poor quality crops this year. Apparently Australian and Russian wheat is pouring into the country. Catastrophe !

Loire Valley Nature: Photos have been added to the entry for the pretty little pea flower Bitter Vetch Lathyrus linifolius.

I think it was all the rain in the spring that was catastrophique.

It is my birthday today, thank you for remembering!

It was more than just all the rain this year, but the lack of sunshine in the first half of the year and the dryness in the second half. Cereal crops and a lot of commercial outdoor veggie crops just didn't have a chance.

Happy birthday from us, Susan, a tad late--but if you stretch your celebration to a full week, not too late.

Well we haven't finished the cake yet, so I guess that means we are still celebrating.