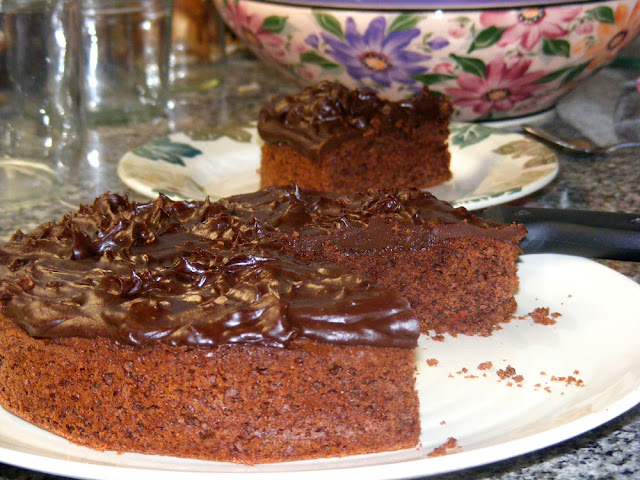 Sunday was my birthday and Simon made me a chocolate cake. He doesn't especially like chocolate cake, but he knows I do. He used Delia's recipe for All-in-one Chocolate Cake, which neither of us have made before. He didn't entirely get on with it, as it didn't seem to make enough batter to make two cakes that would be sandwiched together, so he just made a single cake. Part of the problem was that we only had 20cm/8" tins and the recipe calls for 18cm/7" tins. You can see from the picture it is a perfectly respectable single layer, but would have been two really mean looking layers. After adding more cocoa powder than the recipe called for the batter was very thick, so he added a bit of milk. He commented that you can tell how old this recipe is by the parsimonious quantity of cocoa suggested. A modern recipe would have at least twice the amount.

To ice it he used leftover chocolate chilli ganache that was in the freezer. This had originally been made for his 'saints and sinners' cake club offering. It worked perfectly on my birthday cake.

That looks very good, even to somebody like me who is not a choco-holic.

Good work Simon, what's the point of a chocolate cake if you can't taste the chocolate.
HAPPY BIRTHDAY Susan, I hope you had a lovely day.
Hard you believe it is nearly twenty years since you moved away to Britain .