In September 2016 I went on an outing with the female members of our car club. We visited a number of places in the Sancerre area, including the Cathédrale de Jean Linard.


The artist Jean Linard lived most of his life in a sort of hobbit house that he built himself over the course of his life in an old flint quarry near Neuvy-Deux-Clochers in the département of Cher. It evolved and enlarged as he had ideas and was entirely constructed out of found and salvaged materials. He died in 2010 and his only surviving child couldn't afford to restore and keep the place. Fortunately a group of 'friends of Jean Linard' stepped in, formed a charity and bought the place. They are still in the process of deciding exactly how best to use the place. 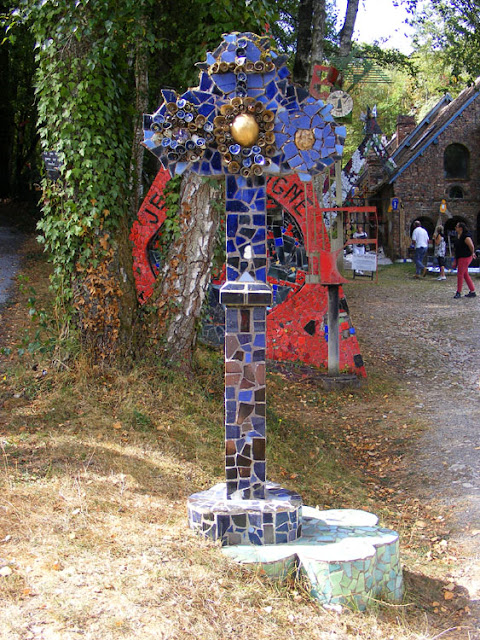 A potter, sculptor, painter as well as a builder, he began what he called a chapel in 1983. Originally it was to have been a collaborative public art project in the nearby town of Sancerre, but he fell out with the town authorities and decided to go ahead with the project on his own land, just outside his studio. It soon spiralled into a church and then a cathedral. It became his master work and is what people come to see when they visit the property, but to be honest, I prefer the house and its quirky decorative elements. 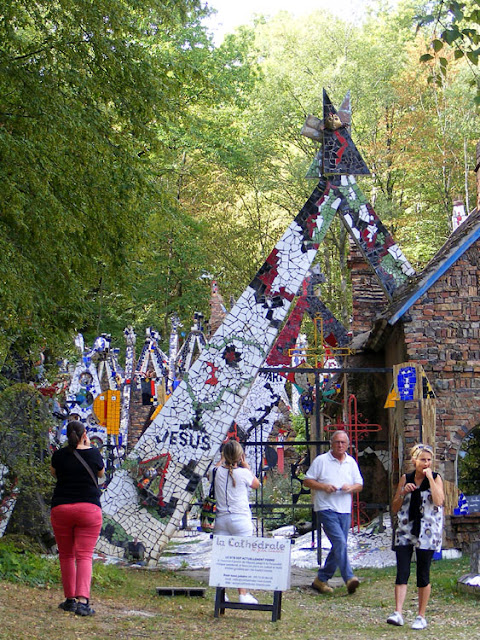 He originally trained as an engraver and worked in Paris from 1945 to 1959. In that year he met the Danish potter Anne Kjaersgaard, who had arrived in the village of La Borne after having worked with Bernard Leach in Cornwall. La Borne was effectively an artists colony, where many studio potters had established homes and workshops. Jean bought the quarry and they married in the 1960s, moving in to the tiny cottage on the site and setting about enlarging the building to suit themselves.


Everything you see in stone or clay has been created by Jean Linard. 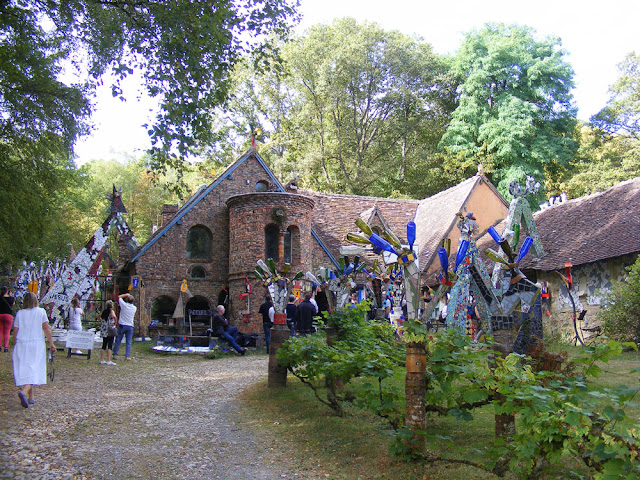 He became a potter, turning bowls, plates, cups, pitchers, vases and goblets and creating his own glazes using ash from oak, straw and vines to produce creamy whites, pinks, celadon greens and blues. Over time he constructed several kilns, but eventually, wanting more control over the firing process he installed a gas kiln in 1976. Very particular, he loathed thick rims and liked to glaze the interiors of goblets but leave the exteriors unglazed. He liked the contrast between the glaze and the bare clay, and had a horror of identical sets.  Because he worked when an idea possessed him, he never took commissions.


Little creatures on the roof. 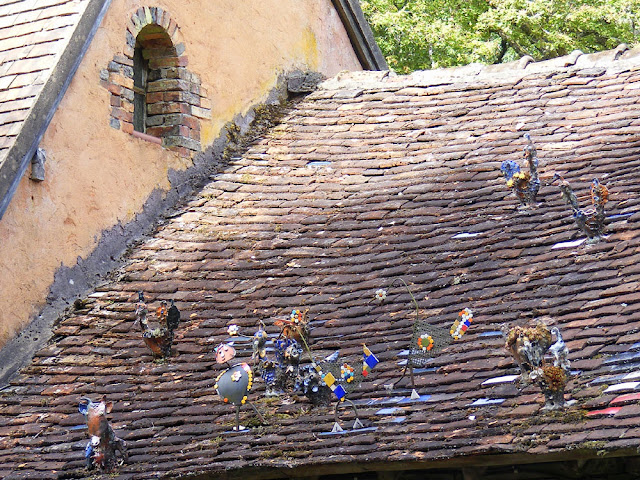 In the early 1960s he started producing some sculpture. These works were clay, but augmented with raku, cement, mosaic and iron. In the last 15 years of his life it was the sculpture that occupied most of his time.


The entrance to the gallery wing. 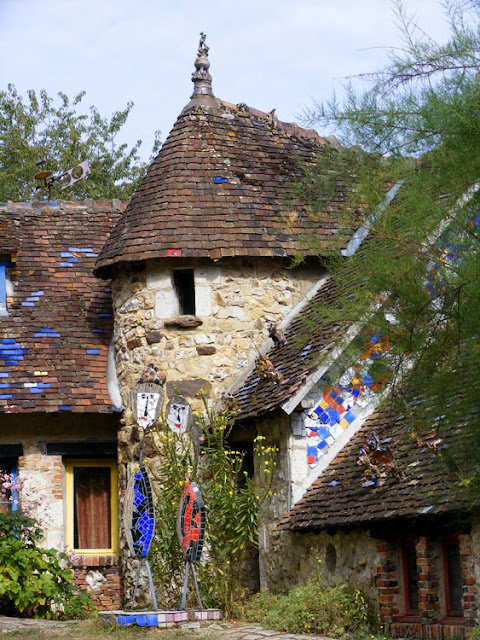 He was inspired by the nature and people around him. In 1974 he married for a third time, to Anne-Marie Guenin. She liked cats, and so cats joined the birds, especially owls, that he had been making for years. His daughter's dolls inspired a series of characters which became 'angels' and then there were 'teachers' and finally, monumental 'guardians'. Anne-Marie's brothers asked him one day why he didn't do cows, since there was a herd across the road, and another series of creatures was born.


The tile floors in the gallery were replaced twice by Linard. 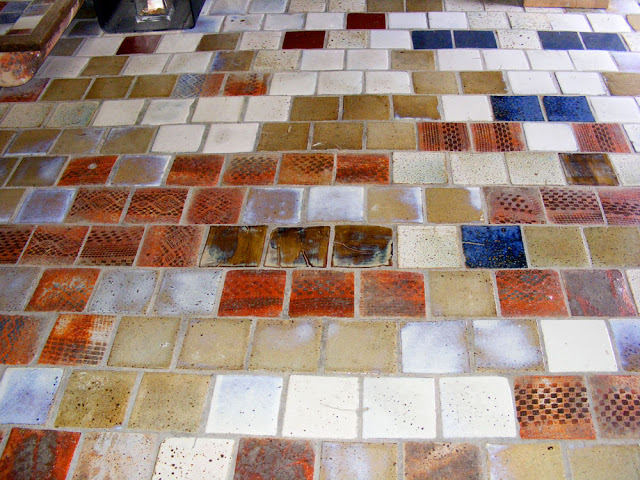 He is very clearly in the tradition of the Facteur Cheval, la Maison Picassiette and the Catalan architect Gaudí, and was a big fan of all three, as well as Picasso.


A flight of steps in the gallery wing. 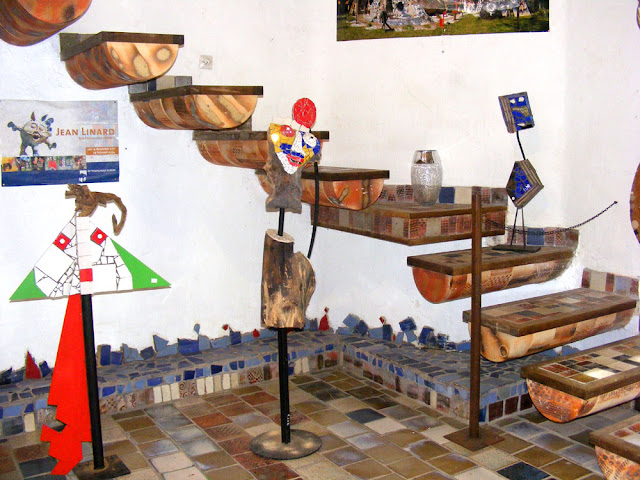 The cathedral, his most well known work, is an expression of his deep faith. He felt driven to start it and continue the project. Initially he made the tiles used in the mosaic, but very quickly he resorted to buying seconds from a big commercial tile manufacturer.

Loire Valley Nature: A new entry has been added for White Mulberry Morus alba, introduced in the 15th century and now naturalised.

Chicken noodle soup from the freezer.

Cod with lentils, broccoli, spinach, tomatoes, onions and chorizo, which somehow turned out a bit odd. We blame the chorizo, which was a different brand to the one I normally buy.
Posted by Susan at 09:00

Facteur Cheval comes to mind right away. Otherwise, no comment :-)

Had to Google Facteur Cheval...an even more amazing edifice due to the nature if the stones he used I guess.
Does "moreish" mean that you want to keep eating more and more of
something?

My immediate thought was Maison Picassiette in Chartres, but yes, not really my thing either. I did like the building itself and the floors and steps. The sculpture wasn't my taste.

Why did you have to Google Facteur Cheval? Was the link I provided not working or something?

Moreish means exactly what you devined.

I completely missed that you had provided a link. Didn't pay attention until I read CHM's comment. The photos of the tile floor and those crazy stairs distracted me, I guess.