Looking down on Chavignol from about three-quarters of the way up the vineyard slope. 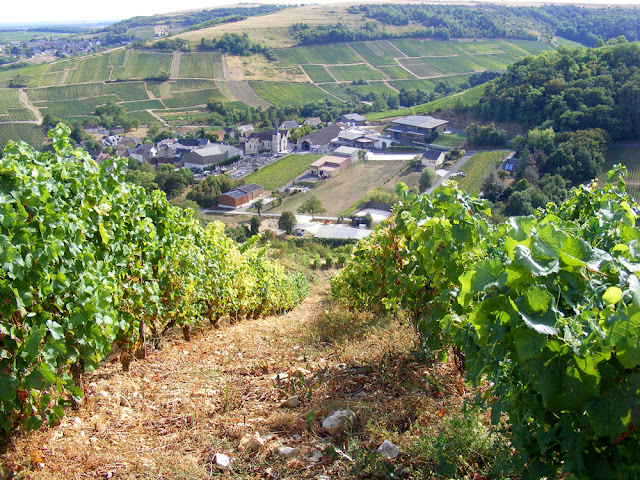 In September I participated in the annual women only outing that our car club organises. As usual I acted as navigator for Suzanne G and she drove her Citroen Traction Avant. Our first stop was to pick up a third companion, Bénédicte. Women and cars were coming from all over the Touraine and Berry. The meeting place was the village of La Borne, near Henrichement. We had morning tea here then went on to do some sightseeing at the cathedral of Jean Linard and cheese tasting at a goat dairy farm before picnicking at the étang at Neuvy-Deux-Clochers. Everyone had brought their own lunch. I made a savoury carrot dip/spread and and a citrus juice and rosé punch. The punch went down extremely well and Bénédicte asked me for the recipe.

Classic cars, all lined up by their women drivers in the forecourt of Michel Girault's winery. 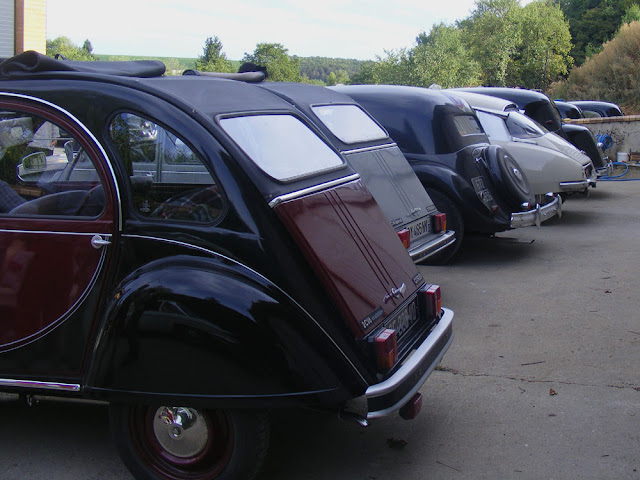 After lunch it was on to Chavignol to walk amongst the vines and then go for a tasting at a carefully chosen winery in Bué. What was the criteria for choosing the winery? Plenty of parking and the winemaker owned a classic car.

Looking down on Chavignol and across the valley. 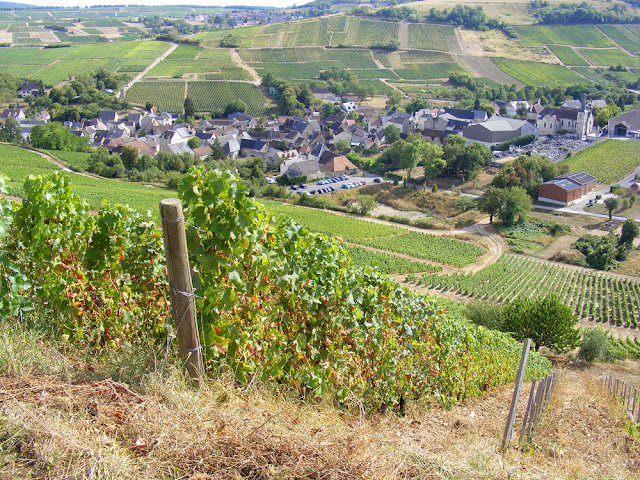 When we got to Chavignol, Bernadette J who was organising the outing, thought it would be a good idea to walk straight up the the hill through the vines. The view would be worth it she insisted. I cannot emphasise enough how hot it was out there amongst the vines, and no, frankly, although good, the view wasn't quite worth it. It may have been September, but the temperature was in the 30s and the vineyards are steep. Fortunately I had taken Bernadette's advice and brought a hat and a stick, but even so I nearly expired on the way up. I imagine Bernadette slightly regretted setting off up the slope too, since she had picked up quite a cargo of hartwort and agrimony seeds by the time she got to the top. Those tights of hers would not have been salvageable.

Bernadette descending through the vines. 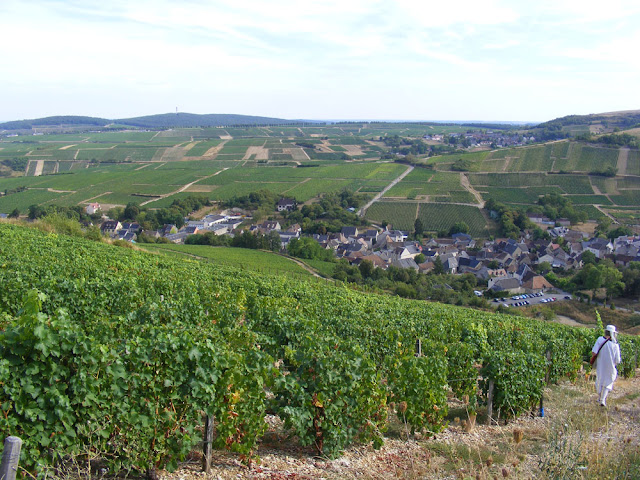 The winemaker at Bué, Michel Girault, had been extremely lucky. Sancerre was one of the wine appellations that was badly hit by the April 27 frost in the spring, some producers even losing their entire 2016 vintage. However the slopes around Bué, which are part of the Sancerre AOP, were more or less untouched, so Michel was looking forward to a good harvest. 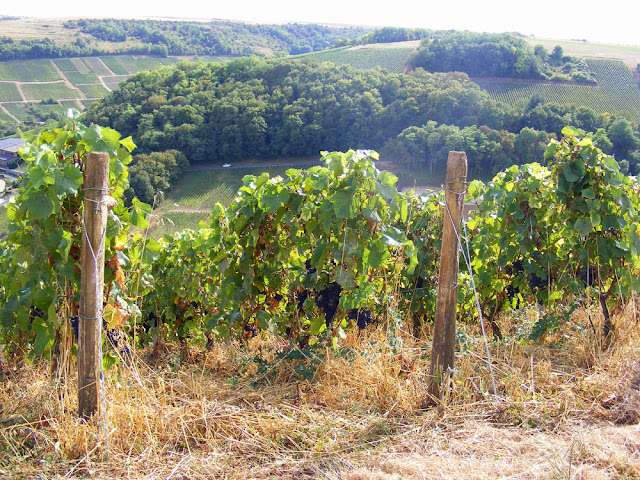 I've noticed that Sancerre is the one Loire Valley appellation that our American clients all know. I like Sancerre wine, but we don't drink much of it because it's actually quite a long way from Preuilly. Much easier to buy Touraine and Vouvray.

Steep, with loose crumbly limestone pebbles. Not easy to walk up in the blazing sun. 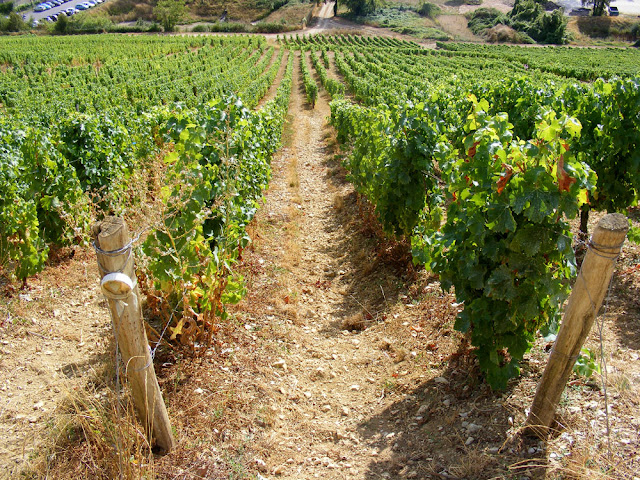 The head of the valley at Chavignol. 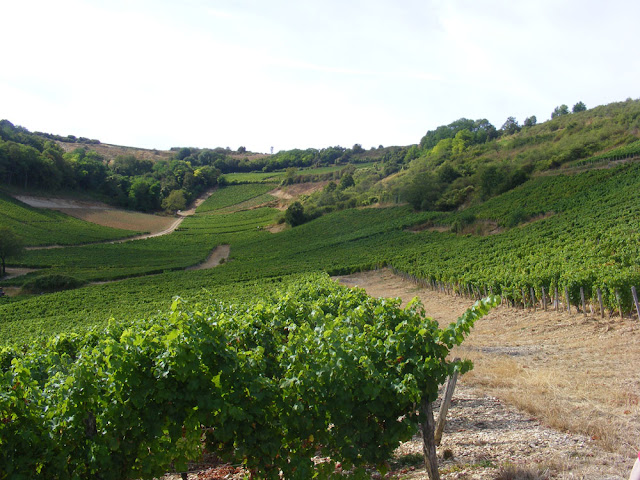 The sensible members of our group took the farm vehicle track which was longer but easier walking. 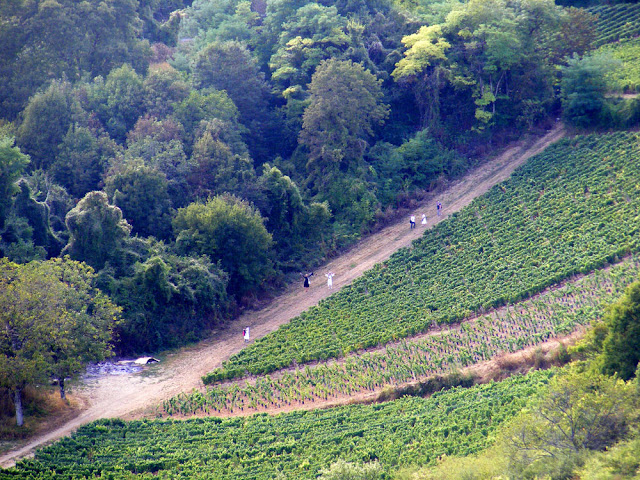 The village of Sancerre over on the next hill and beyond that the Loire river. 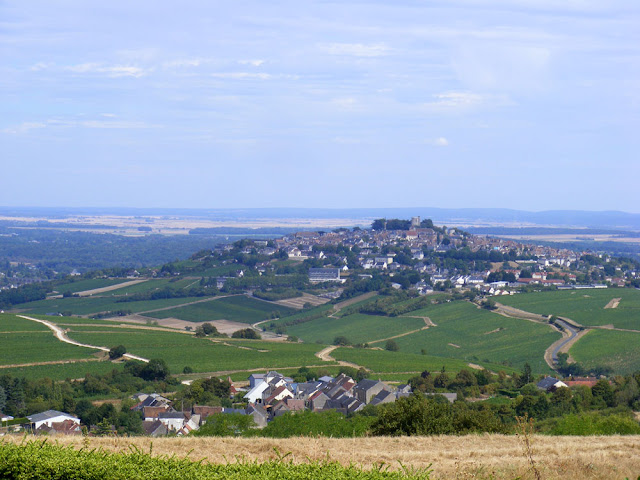 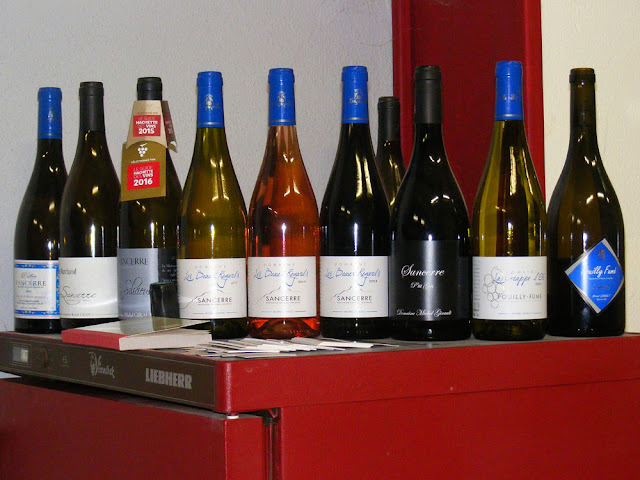 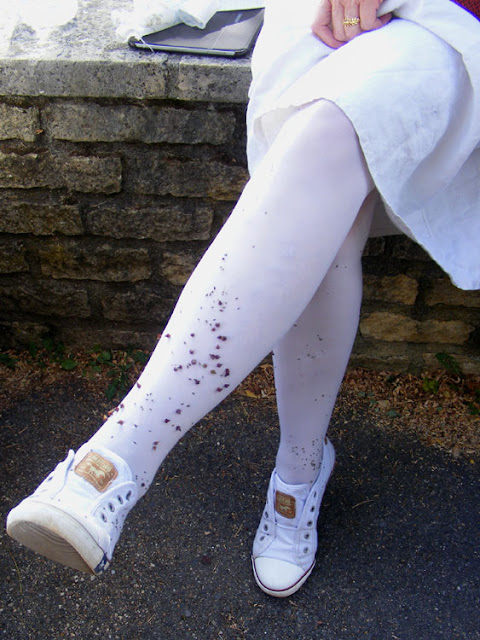 We haven't been to Chavignol but the photos are lovely (even if it was very hot). That reminds me of when we went walking in the vineyards in Luxembourg in the summer one year. We had the added pleasure of the river in the distance.
BTW, our sancerre winegrower has a sister who lives in Blois so we get free delivery if we're not in a hurry. We can let you know next time we order if you like, probably in January or February.

Thanks for the offer. I'll let you know.