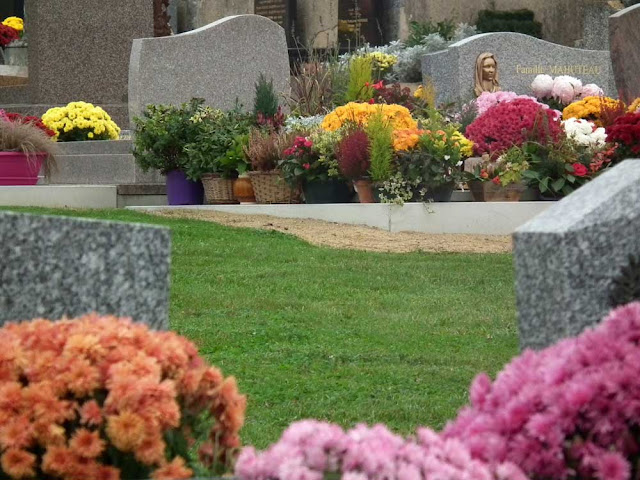 The cemeteries of France are at their most colourful at Toussaint (All Saints Day). The day is a public holiday and many people take potted chrysanthemums to the cemetery to place on their family's graves. Chrysanthemums are so much associated with cemeteries that they are not used much elsewhere now. Foreigners are always advised in the most serious of tones on the internet to never, never give chrysanthemums to a living French person as they may take offence (or at the very least think it's weird). Having once been given a chrysanthemum in a pot by a French person myself, I'm not sure how seriously to take the advice, but it's probably wise to avoid them just in case.

According to the French weather bureau, this Toussaint will be warmer than average. The forecast is for it to be mild and sunny (I'm writing this on Sunday). The previous two years the day and the eve have been exceptionally mild and sunny too.  In 2014 Arcachon, on the Atlantic coast, reached 30°C on 31 October, a record for that date on mainland France. The same year it was 23°C in London and had never been so mild for Halloween. The next day in France the temperatures didn't rise so high, but they were still record beaters (24°C in Clermont Ferrand and Agen, just beating the previous record set in 1970).

Last year numerous record temperatures were set for these two days in Brittany, Normandy and Dordogne. This year the prediction is that temperatures will be mild and close to last years, but not record breaking.

Because le Jour des Morts, Day of the Dead, is so close — 2 november — there was a shift, at least in France, and people associate wrongly All Saints' Day with All Souls' Day.

Maybe the shift was just because it is All Saints' Day which is the holiday and that's when people have time to put flowers on the graves.

I'm sure you are right.