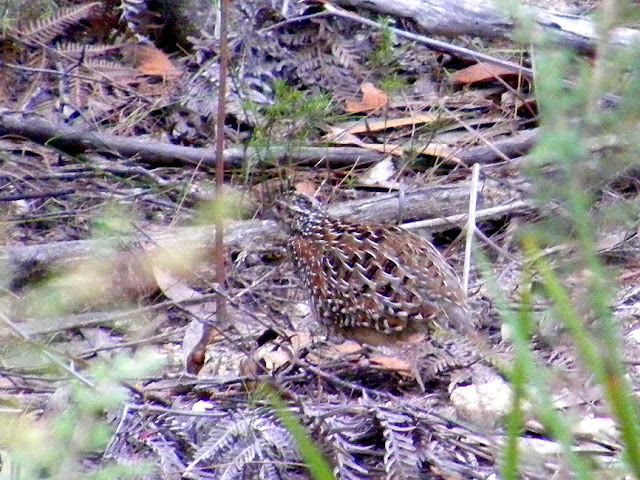 These adorable little Painted Buttonquail Turnix varius are fairly common, but their population is believed to be declining. Buttonquail look a lot like Old World Quail, but in fact are not related. The species was first formally described and given a scientific name in 1801 by the English physician and ornithologist John Latham. He is known as the 'grandfather of Australian ornithology' for his work describing many species at the end of the 18th century, working from specimens and drawings held in British museums.

Painted Buttonquail are about 20 cm long, scuttling about on the forest floors of eastern and southern Australia. Look at how well camouflaged the one in my photo is! They eat insects and seeds. It is the males that incubate the eggs and rear the young.

On Sundays our posts have an Australian theme. If you would like to read more, click here.

Loire Valley Nature: A photo of a maternity roost has been added to the entry for Lesser Horseshoe Bat Rhinolophus hipposideros.

A new entry has been added for the delightful European Pine Marten Martes martes.

Photos have been added to the entry for Roe Deer Capreolus capreolus, our smaller and most abundant deer species.

A photo of frogspawn has been added to the entry on the Green Frog Group Pelophylax spp.

A photo of a House Martin nest has been added to the entry on Swifts, Swallows and Martins.

Photos of an injured bird have been added to the Barn Owl Tyto alba entry.

A new entry has been added for Asp Viper Vipera aspis, the only snake in our area that can deliver a venomous bite.

Environmental News: Work starts tomorrow on building a wildlife bridge over the A10 at Coulombiers. It is part of the environmental mitigation required as part of the widening of the highway. It is hoped the bridge will be used by small and medium fauna such as beech marten, pine marten, red fox, polecat, and numerous amphibians. The bridge will link two significant woodlands. Ecological surveys have been conducted in the area and will continue for some years. In addition, camera traps will be set up to study how animals use the bridge. For more information see the report in the Nouvelle République.

A la cuisine hier: A couple of weeks ago Simon made a big batch of his sausage and bean casserole, so we had some of that from the freezer. Then he made a big dish of macaroni cheese from scratch with some of the cheddar that Niall and Antoinette brought back from Scotland for us.

I made Chocolate Gingerbread Cookies. These were almost identical to some fat free ginger biscuits I made the other day, except that they contained butter instead of apple puree and had added chocolate. I swapped half the butter for apple puree and they worked fine. I used proper Buderim candied ginger (brought over from Australia by my sister) in both lots of biscuits.

I quartered and peeled a tray of Reinette Blanche apples and stewed them.