This post is my translation of the Fondation du Patrimoine donation page for the restoration of the Chapelle de Tous les Saints, Preuilly sur Claise. If you have not already done so, please consider donating online.


The chapel, I think taken at the time of listing as a historic monument. 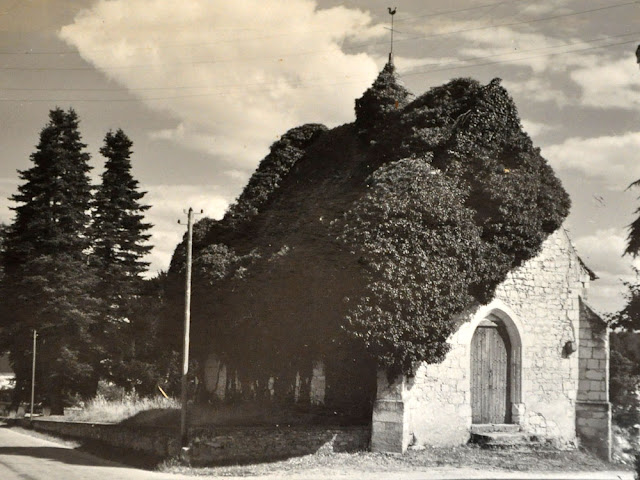 The peaceful town of Preuilly is situated in the extreme south of Indre et Loire, perched on the south facing slopes of the Claise Valley.

The former premier barony of the Touraine is no stranger to rich architectural heritage, ranging from the vast 12th century romanesque abbey down by the river and the chateau on the hill. There are no less than ten buildings protected by listing as Historic Monuments, amongst which is a charming small chapel from the 15th century (registered as a Historic Monument on 13 May 1953). The Chapel of All Saints was built at the end of the Middle Ages at the far end of the most important parish cemetery and ever since its structure has remained the same, with the exception of a side door, opened up in 1684 to facilitate access to the cemetery.

A small rectangular building with a tile roof, constructed in limestone and lime mortar, its corners are supported by buttresses. The walls are pierced on the west by a door with a moulded pointed arch, the flat sanctuary end by an elegant Flamboyant Gothic window, and on the north and south sides by a more simple window to light the building. A carpentry belfry protected by slates points towards the sky. Its story is quite turbulent and its very existence threatened several times. The taking of Preuilly by the Huguenots in 1562 was the occasion for the sacking of the churches in the town, and the faces of the characters in the chapel's painted danse macabre were gouged out. A restoration of the interior of the santuary in the 19th century saw the paintings covered in render and painted with a pattern of false stone courses.  Prior to this the walls were keyed (hacked at with a pick) to take the render and this caused more damage to the paintings.


The ceiling and western gable interior as it is today. 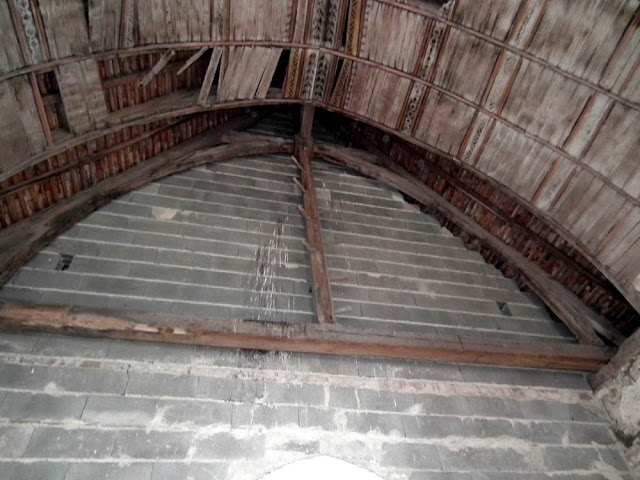 Finally, the relocation of the cemetery at the beginning of the 20th century left the chapel abandoned and steadily deteriorating, up until the removal of ivy carried away the facade of the building and the local council even considered its demolition in the 1950s. But this is a reliquary protecting a real treasure! Indeed, inside under a polychrome panelled wood ceiling, is a danse macabre, painted on the walls in shades of red, yellow and ochre. According to the canons codified at the end of the Middle Ages, the procession features secular and religious dignitaries as well as villagers and peasants, whose skeleton 'reflections' remind all of the equality of facing death in this time of  war and serious epidemcis. In the sanctuary, flanking the altar, a group of musicians accompanies them. The unusual feature of Preuilly is to have on one side a dance of women and on the other, that of men, a very rare configuration. Fewer than a dozen of these precious paintings exist in France. These are in serious danger due to the state of abandonment of the building, which is threatened with ruin and contribuiting to the degradation of the paintings since their updating in 1957.

In fact, Mr Lhériter de Chezelle, founder of the Friends of Loches and Area, had bought the building to save it from demolition. He updated the completely forgotten paintings and undertook some urgent work which was taken up by his children some years later. Nevertheless, for forty odd years, time has taken its toll. So it was that, with the encouragement of the local history society, the local council, who had become the owner, undertook to do a study in 2014 to determine how to approach the restoration.

The interior, I think in 1953 when the building was listed. 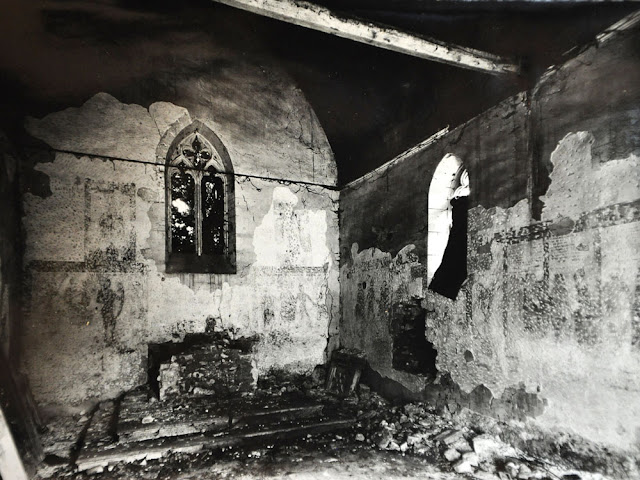 Nature of the Works

It is therefore essential to first of all make the building stable and watertight, and make sure the walls can retain their painted decoration. The works will therefore be divided into three stages.
Detail of the danse macabre as it is today, showing part of the dance of the women. 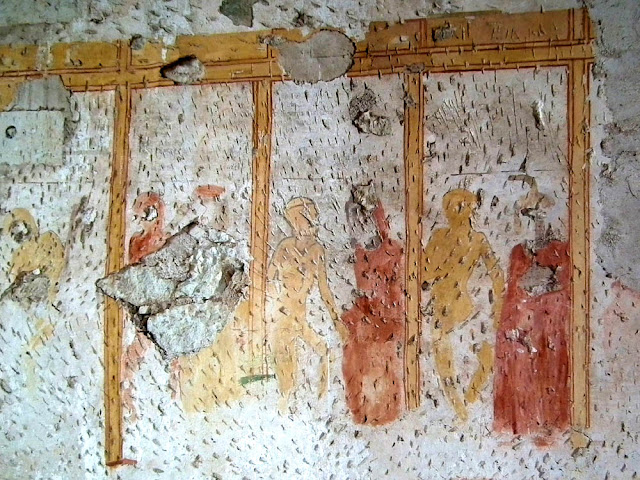 Partners
The Fondation du Patrimoine (Heritage Foundation) is a partner in the operation alongside DRAC Centre-Val de Loire (the regional department of communication and culture), the Conseil Départemental d'Indre et Loire (the county council), and the Sauvegarde de l'Art Français (Saving French Art).

Loire Valley Nature: A new entry has been added for Greater Horseshoe Bat Rhinolophus ferrumequinum, a not uncommon species here.

A section for House Martin Delichon urbica has been added to the Swifts, Swallows and Martins entry.

Au jardin hier:  One of our dead cherry trees has snapped off at ground level in Monday or Tuesday's wind. This tree had been ringbarked by the previous owner for underperforming. I'll have to saw it up and turn it into firewood over the winter.


A la cuisine hier: A batch of 6 jars of apple jelly, made from Reinette Blanche apples.

"This tree had been ringbarked by the previous owner for underperforming."....
a strange punishment for a tree....
was it to warn the others to pull their socks up!!
"C'mon, fruit yer boogas... else I'll ringbark yer too!"

That was the distinct impression I got.

I was going to make a donation, but their stupid site doesn't accept my telephone number, telling me it is invalid. Tough, I canceled my donation without any regret. À bon entendeur salut!

I don't recall it asking me for a phone number, but I could be mistaken. I'm sorry you got frustrated.

Hello, the donation page has changed !
The right web link is : https://www.fondation-patrimoine.org/les-projets/chapelle-de-tous-les-saints-de-preuilly-sur-claise

Thanks Fab. I've changed the link.