Fungi Outing in the Forest of Loches

I went on the fungi foray on 30 October organised by the Association de Botanique et de Mycologie de Sainte Maure de Touraine. We met at the carpark by the Pyramide de Saint Quentin. Here are some photos of the highlights of the afternoon: 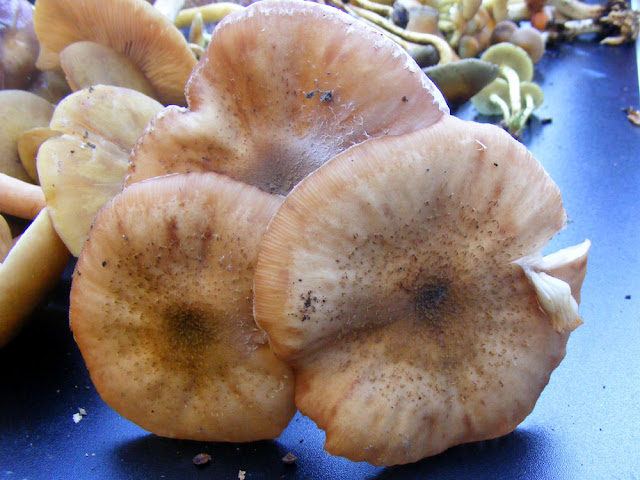 With age Honey Fungus develops a sort of hairy appearance. 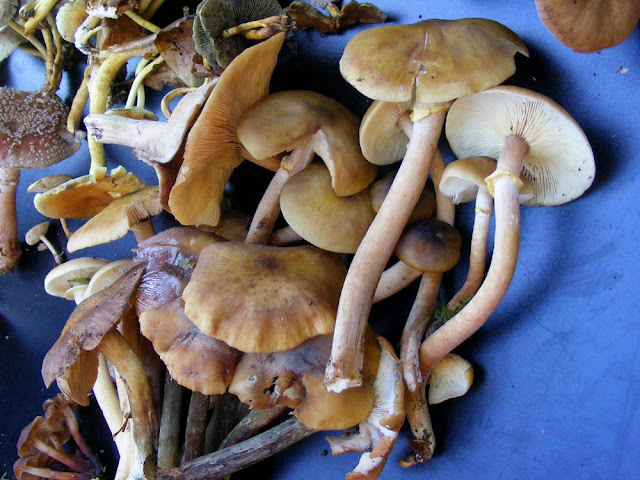 Note the 'ring' on the stem. 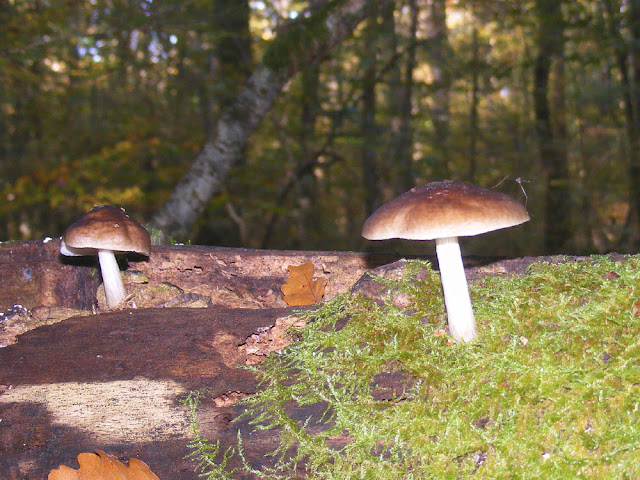 Note the absence of the ring, which makes it easy to distinguish this species from the most common form of Honey Fungus. 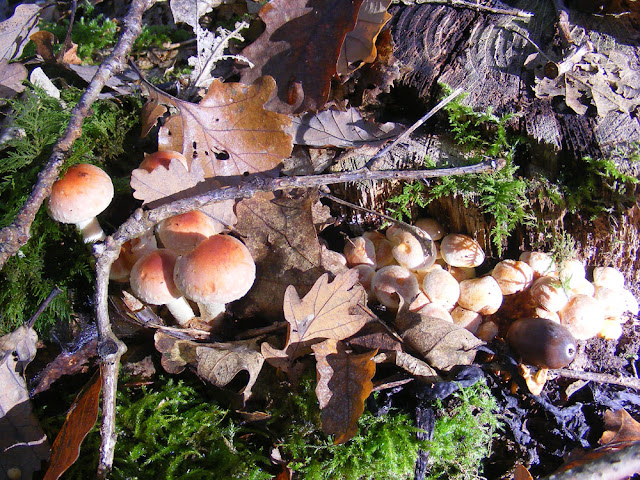 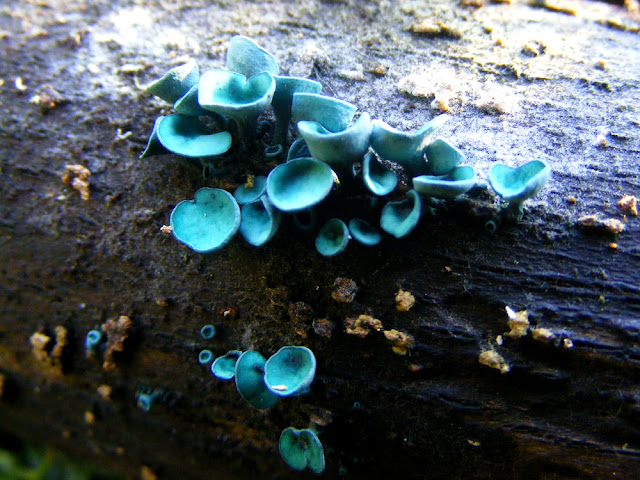 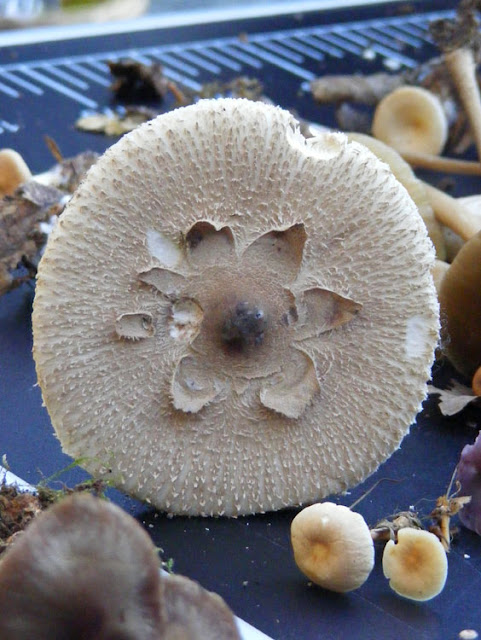 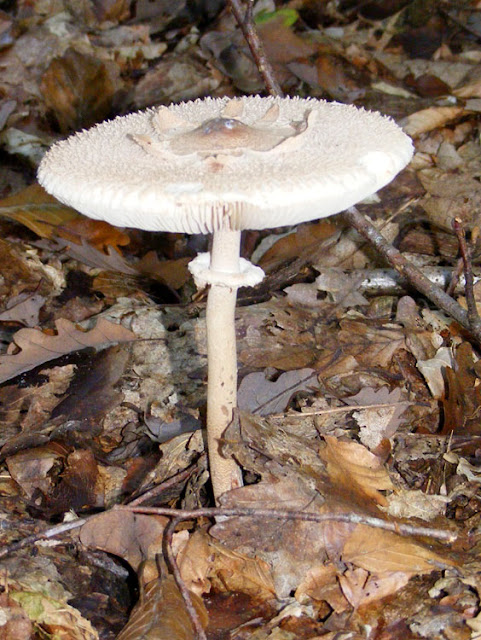 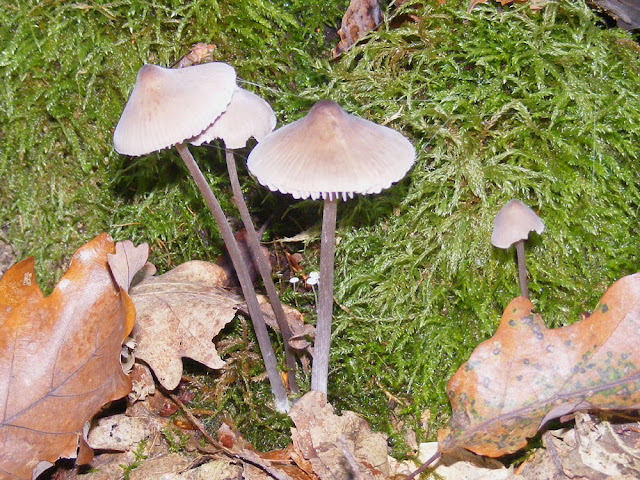 You can just make out the vertical stripes on the stem that distinguish this species from other lookalike Bonnet mushrooms. This species is also a little bit bigger than a lot of Bonnets. 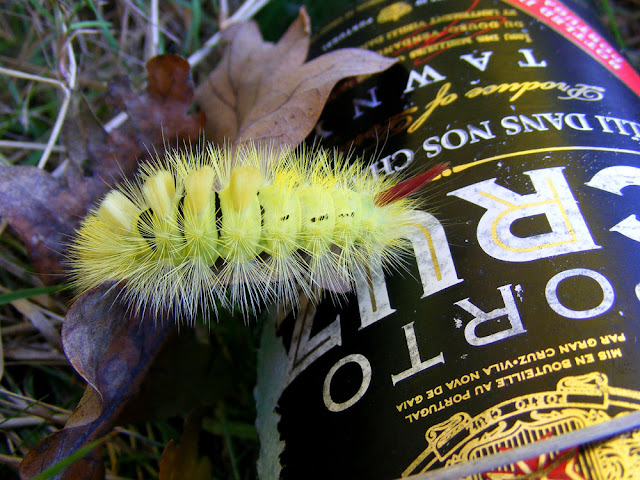 No, tawny port is not the caterpillar's food host, and no, I am not responsible for emptying the bottle. 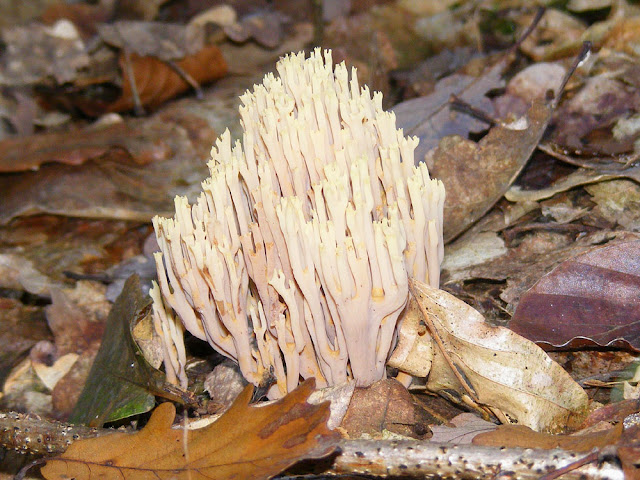 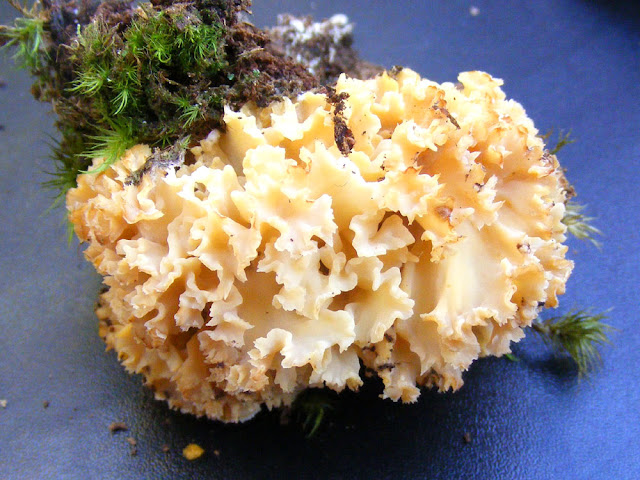 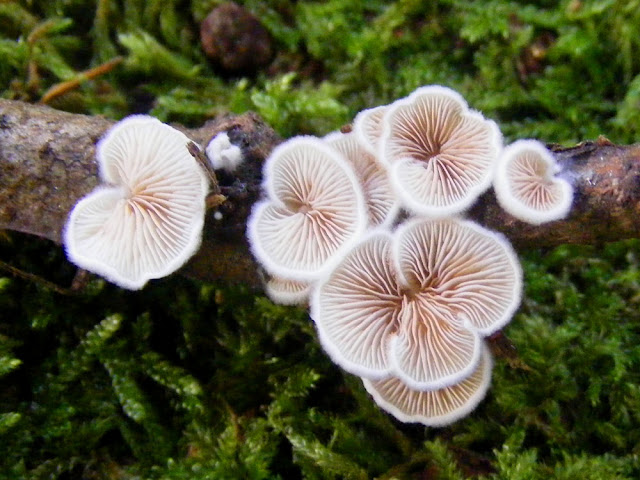 This tiny mushroom is so cute, with its champagne pink gills and downy pure white caps. They never get any bigger than this, and were everywhere on twigs on the ground in the forests in late October and early November.

Global Coincidences: Jlm, a longtime reader based in the US but who was born in the Touraine, emailed me yesterday to give me a link to a young couple's Flickr album that he thought I might be interested in. The couple had paddled a canoe from the young man's grandparent's place, a mill on the Claise at Bossay, all the way to the Atlantic. Jlm mentioned that he thought the young couple lived in Australia now. What jlm had no way of knowing was that my sister ran into the young man in Kununurra in the isolated north-west of Australia a couple of years ago. They fell into conversation and my sister emailed me on the spot to see if I knew the family. I didn't, although I knew of them, as they are very involved in the mill owners association. Until jlm emailed me I had no idea the grandson had made his epic river journey. The connections the internet facilitates is amazing!

Update: John E-W has emailed me to say:

The Canadian style canoe used by the grandson to travel from Bossay to the mouth of the Loire is still in the grounds of the mill.  Many having had their attention drawn to it my well have thought ‘I would love to do that.’  Some, like me, may even have been introduced to the idea earlier by reading how C. S. Forrester’s hero Hornblower escaped from French captivity by the same down-river route.

How to Comment: We've had a few people mention lately that they would comment on the blog but can't figure out how to do it. I'm not sure if I can help much, but here are some links with instructions. Something in them may work for you if you are one of those struggling with Google or Blogger idiosyncracies.


So...if you can't make comments work, just email me. I can't help you with comments functionality, but I will be interested in what you have to say. My email address can be found if you click on my profile on the right side bar.

Au jardin hier: I was washing some nearly past it tomatoes to cook them for dinner and Simon was fetching in some more firewood when he called me outside at about 5 pm yesterday. Two small flocks of Eurasian Cranes totalling 30 - 40 birds were flying down the valley, bugling to one another. They wheeled around and flew over the house, looking like they were heading for an overnight stop in the Brenne on their way to spend the winter in Spain.

Loire Valley Nature:  A new entry for the introduced Ring-necked Pheasant Phasianus colchicus has been added.

A new entry for Prehistory has been added.

A la cuisine hier: Vegetable curry from the freezer, served with plain rice.

A gratin of home grown green beans from the freezer and the aforementioned tomatoes, to accompany chicken breasts dry rubbed with a special salt and spice mixture for chicken brought back from Ile d'Oléron for us by Niall and Antoinette. I added a slice of cornbread from the freezer on the side.

Fascinating photos. Seems to have been a particularly successful field trip. Especially liked the green elfcups. Such beautiful moss too.

What is amazing is the beauty and variety of these mushrooms. You're lucky to have seen so many.
It is a small world, indeed!

Actually in terms of abundance of fungi and numbers of species this was an exceptionally poor outing. It's been too dry for much fungi to have emerged. I just happened to get some nice photos of some of the more interesting examples.

I agree. The variety of forms is amazing, and I chose these examples to demonstrate the range. Even on a day when we saw so few species there was a lot of variety and beauty.

I've just spent half the morning enjoying the canoe trip on flickr. It looks like it was a lot of fun.

It gives you a really good idea what this area looks like, doesn't it? Although there seems to be a weird gap between about Saumur and Nantes. Maybe the camera got dropped overboard?

Also check out Guagua Pichincha's Australia photo album on flickr. Click on his username in the Claise to Atlantic album.

I'd love to find some of those elfcups! We've been mushrooming twice to no avail. We're hoping there will be some chanterelles and pieds de mouton soon though.

I went out with the gang in the Foret de Preuilly on Sunday. We found one bolete, no chanterelles or pieds de mouton. Lots of false chanterelles (which are also edible, if you are interested) and the biggest orange pézize I've ever seen.

The elfcups aren't easy to spot in low winter forest light. Once you know to look for wood stained with blue on the forest floor you will eventually find some.

Hurrah! Well done for persisting. You've given us such a wealth of information over the last few years I'd love to see you commenting from time to time.

I'll do that, but I need to get to the supermarket this morning :-)

I've just had a quick look at the first page. There are some really terrific photos in the album.