My Back Pages: Simon's T-Shirt Archive (7)

When I was but 5 years old, Thunderbirds was my absolute favorite TV show. I can remember watching it in black and white on TV, then being blown away when I went to the cinema to see the film (Thunderbirds are Go) which was in colour. Amazeballs (as we didn't say back then). 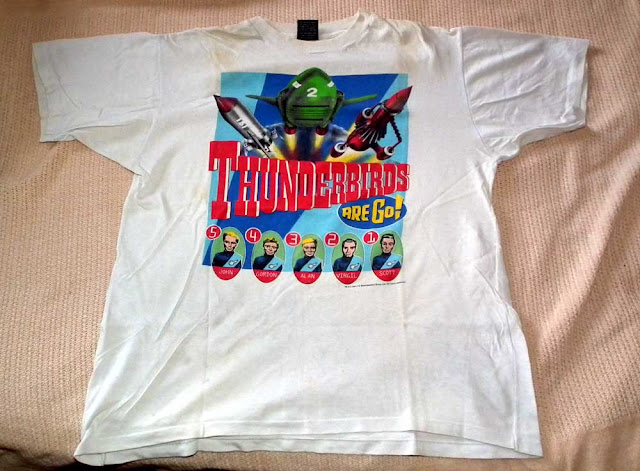 When I saw a thoroughly retro looking Thunderbirds t-shirt on one of my stage gear buying sprees I knew I had to have it. As with the past few weeks, no photo of the band with me wearing the shirt - but who needs that when you have this!

Loire Valley Nature: Some photos have been added to the entry for Roe Deer Capreolus capreolus.

Two photos of frogspawn have been added to the entry for Agile Frog Rana dalmatina.

A new entry has been added for Wildlife Rescue.

A new entry has been added for Abandoned Underground Limestone Quarries (Troglodyte Caves). This entry is a stub, to remind me that I need to write more on the subject (hence the completely rubbish picture...).

A photo showing how to easily count flocks of flying birds has been added to the entry on Eurasian Crane Grus grus.

A section for Common Swift Apus apus has been added to the entry on Swifts, Swallows and Martins, with photos of nest boxes.

Firewood: We took delivery of 2 stères of oak, cut into 50 cm lengths and split to fit in our stove. It cost €50/stère (which is a cubic metre) plus a €10 delivery fee (due to our narrow access the wood man has to make multiple journeys with his station wagon rather than a single delivery with his ginormous tractor). The wood came from a fallen tree (un arbre qui s'est effondré) I'm told, but I was assured it was perfectly dry and would burn well. Our firewood guy is also a farmer so I asked him how the agricultural year had been. 'Catastrophe !' was his assessment of the situation, but he acknowledged that it had been a bad year no matter what your business. He had also seen un petit vol des grues (a small flight of cranes) fly over the evening before. He lives between us and the Brenne so I'm not surprised.
Susan

French Expression: I was waiting my turn, standing by the vegetable stall in the market, talking to Françoise as she bought her vegetables. Brussels sprouts are in at the moment and Françoise wanted a few. She lives alone, so didn't want too many. The market gardener put a few in a bag and then a few more. Françoise intervened by saying 'Ça me suffit !' ('That's enough for me!'). It sounds like 'sam soofee' to anglo ears.
Susan

A la cuisine hier: I took some smoked herring paste out of the freezer to have on baguette. Simon took a croissant from the freezer and had it warm with cheddar cheese in the middle.

I baked savoury biscotti, with some of last years walnuts, cheddar and rosemary. They were good. I reckon they would work well with seeds (sunflower especially). Just the thing for apéro (pre-dinner drinks) with a glass of rosé. Mason and general builder Thierry called round to look at something we want a quote for, stayed for apéro and he agreed that the biscotti were good.

Sweet and sour chicken out of a jar (thank you Colin and Elizabeth) with plain rice. Apple and rhubarb from the freezer, topped with crumble and served with homemade custard.

In the late twenties, my parents rented a villa in Les Sables d'OLonnes for the summer vacations. Its name was... Villa Sam Suffit!

LOL! You are kidding, surely?!

No, I'm deadly serious. Its a very common name for villas or the like in France. Here is a link to the names of houses in France. Go down to L'inertie du nom and to the last sentence of #36, where it says …patrimoine commun auquel appartient le célèbre Sam Suffit…

In a small village in southeastern France, my brother restored an almost ruin where he now lives. Since it housed a dovecote in the old days, he called the final product le Vieux Pigeonnier. There is no other address I know of.

P.S. I reread that linked last sentence several times and it is grammatically incorrect and doesn't make sense since the direct object is missing. But I mentioned it just because it says that the name Sam Suffit is célèbre, famous.

What an awesome T shirt,I am sure there will be a current edition for Christmas, as Mischa's boys Finn and Lincoln 7 & 4 are crazy about the modern animated version and have nearly all the dvd s and a lot of the spacecraft etc. Finn got the island for his birthday, and yes the palm trees moove to launch the rocket!

I skimmed the article. Rather interesting, and she obviously had a rich source of house names in that seaside village she studied. She notes that Sam Suffit is a famous house name, but not represented in the houses in her study.