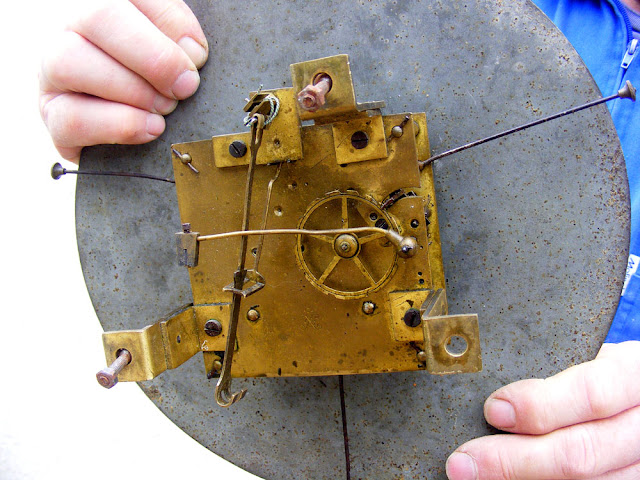 Recently friends of ours, Jill and John, acquired an old clock. They had seen it at a brocante (flea market) but initially decided not to buy it. Then they discovered that other friends had bought it. The new owners of the clock kindly offered it to our friends, knowing their interest in Preuilly memorabilia. 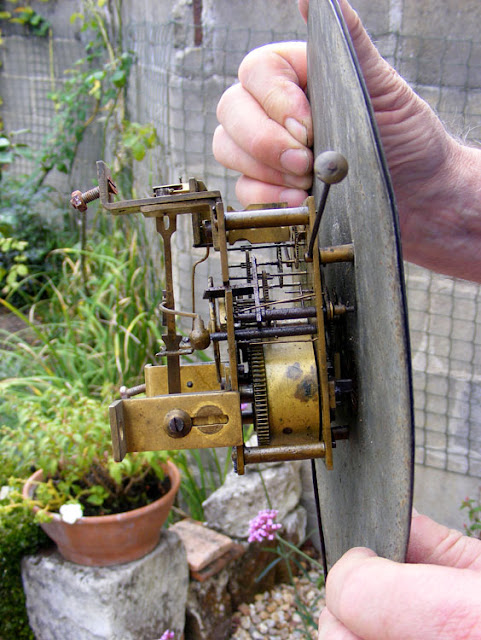 The clock has the name Fanon on the face. Fanon was a clockmaker situated on the market square in Preuilly in the early 20th century. The clock isn't of any great quality, but it is a nice thing to have. 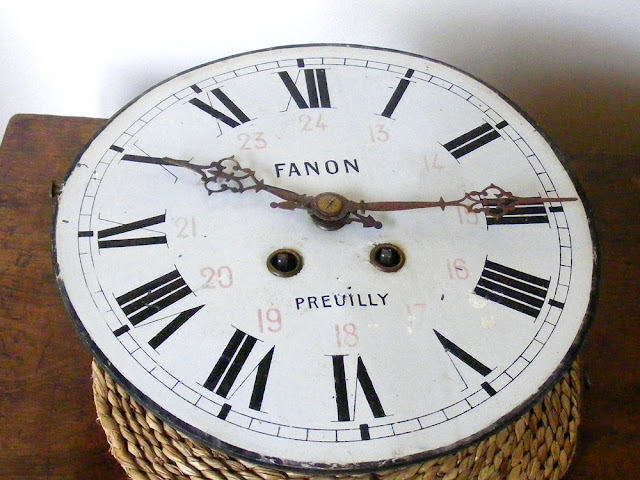 In attempting to find out more about the clock one of the websites that came up for our friends in a Google search was Days on the Claise. We'd blogged about the clockmaker's back in 2008 using information from Roger Lezeau's article in the local history association's magazine. The clock was presumably made in the building shown in the photo in our original blog post.

I will let Jill tell the story of what she has been able to find out about the clock:


[I]t was possible to tell a little more about the movement of the clock from the maker’s mark on the back of the movement.  When I googled ‘clockmakers' marks’  I came up with this site, showing very clearly that the movement was made by Japy Frères Cie in Beaucourt, Franche Comté.  The firm still existed until the 70s, though by then they had diversified into typewriters.
There is quite an interesting account of a visit to the Japy museum, in the old factory buildings on another site and also a reference with sound(!) here.

It was quite common for clockmakers (really often clock assemblers) to buy in parts or complete movements which they would put into their own case and have their name on the clock face.  This also happened with sewing machines, which were often sold with no makers' marks, then labelled by the sellers.  I have 2 German made machines, sold in France and clearly badged as Désiré Bacle, Rue du Bac, Paris!

That’s about as much as I know.  I shall keep asking older Preuilly inhabitants if they remember M. Fanon’s shop, but other than that . . .
We saw the clock at a brocante and didn’t buy it instantly, regretted it, but it was gone later in the day.  It was bought by friends Jim and Pam, enthusiastic and very skilled brocanteurs, who gave it to us as a very generous and valued gift.
Jill

Quiz Answer: The answer to Monday's quiz has now been posted. It is in the church in Mezières-en-Brenne.

Clock Update: Quite by chance my friend Rosemary posted about clocks today too. Her post will teach you about clock terminology in French and sayings that reference clocks.

How amusing! I can see we're on the same wavelength today :). Great to have a pendule locale.

I read your post and thought I would update this one with a link to it :-) The good old blogosphere zeitgeist eh?!