16th century busts (looking rather Roman to my eye) and a statue niche above the entrance to the Chapelle d'Anjou, the south funerary chapel. 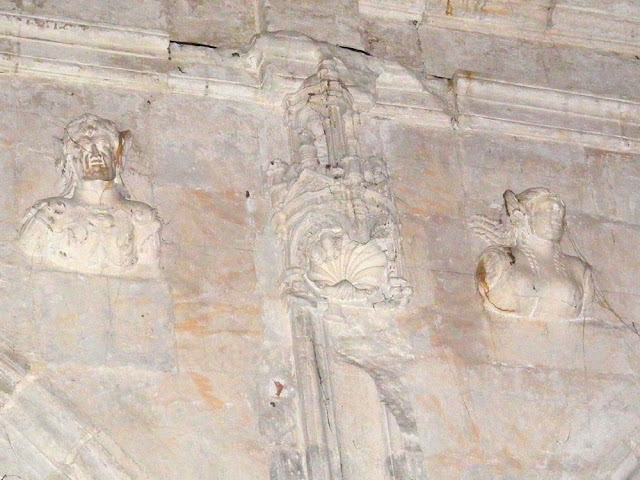 The church in Mézières-en-Brenne is stonkingly good. Everywhere you look -- up, down, left, right, straight ahead --  there is something amazing to see. The thing that struck me was how many different images of the human form there were -- in stone, wood, glass, paint and ceramics -- and in just as many styles as materials.

The entrance to the 16th century Chapelle d'Anjou. 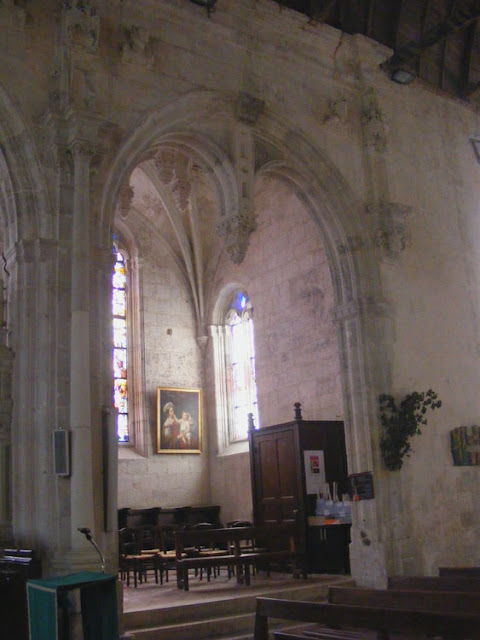 Saint Mary Magdalen's dates from the 14th to 16th centuries and has a vaulted wooden ceiling over the nave, painted decoration and stained glass windows dating from the 14th century. The choir stalls are 15th century and came from the nearby Abbey of Saint Cyran, which was suppressed and destroyed in 1712 due to its association with Jansenism. Built on to the south side of the church in the 16th century is a funerary chapel for the Lords of Anjou, with very fine decoration on the vaulted ceiling and stained glass windows.

The stations of the cross were these rather folky ceramic (or maybe painted plaster) groups.
Mid-twentieth century I would guess. 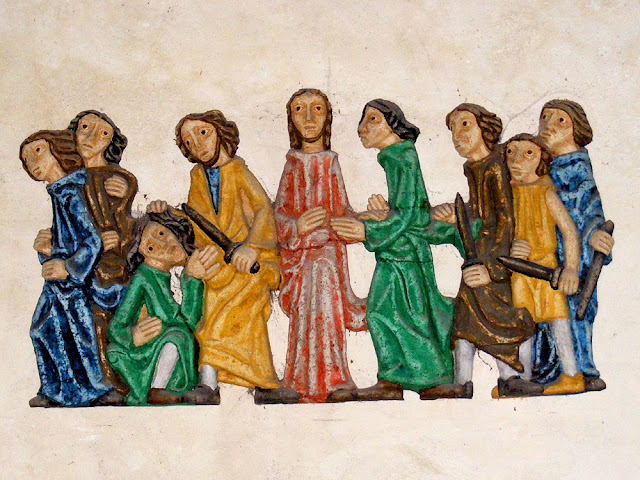 Construction of the church began in 1333 and finished in 1339, commissioned by Alix de Brabant, the widow of Jean III d'Harcourt. She was the Lady of Mézières-en-Brenne, the sole heir of her parents and having inherited Mézières-en-Brenne from her mother, she built the church to house her parents tomb. She was also the granddaughter of the Duke of Brabant and niece of the queen of France. Alix herself died in 1341 and in 1445 her descendents ceded the Lordship to Charles of Anjou, prince of the blood and son of Yolande of Aragon, Duchess of Anjou, brother-in-law of Charles VII and uncle of the queen of England. Charles' son Louis, known as the Bastard of Maine, built a funerary chapel on the north side of the church, then Louis' grandson Nicolas built the bigger, grander chapel known as the Chapelle d'Anjou to the south in 1543.

I nearly missed the heads leering out from the base of each of the rafters.
They are all different and I am fairly sure are carved wood. 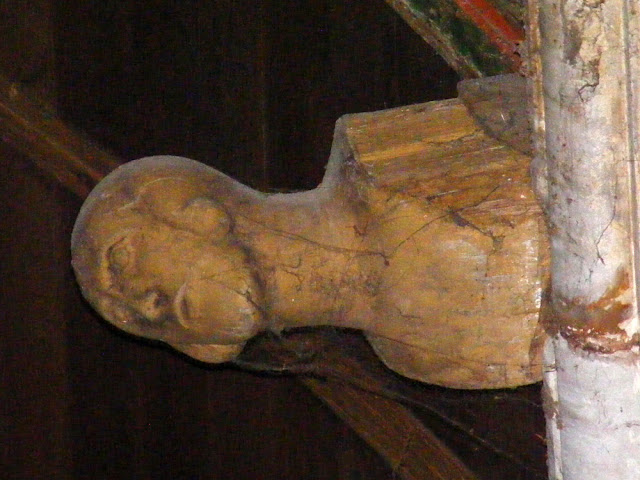 After this, the story of the church is one of abandonment and deterioration. In 1840 a tradesman's quote for its repair shows that it was in a deplorable state. In the end nothing was done except to put grills over the stained glass windows to protect them. In 1850 Prosper Mérimée visited as part of his travels around the country to assess buildings to create a list of officially protected historic monuments. His report says (my translation): 'The church of Mézières offers, in my opinion, very little of interest. It belongs to a period of very advanced decadence, and except for a chapel remarkable for the skill with which a very tortuous and deeply cut ornamentation has been executed, I see nothing that distinguishes it from a multitude of churches of the fifteenth and sixteenth centuries which no one cares about'.

This looks like a man with his wife and daughter, at the front door. They are charming, but I'm not convinced that they are medieval. I suspect they are part of the 1920s restorations. 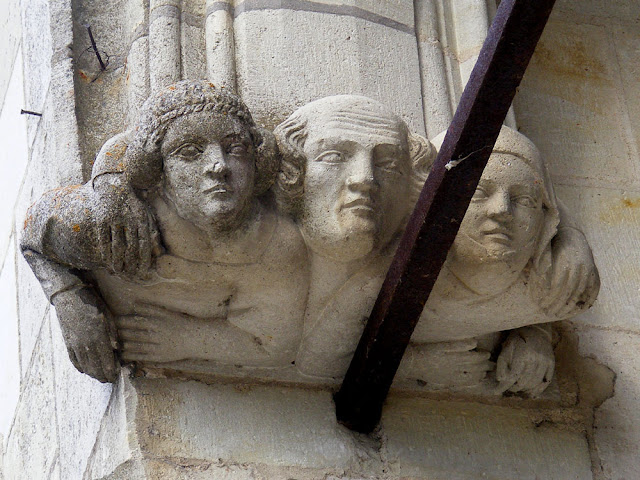 The church wasn't classified as a historic monument until 1862. Nothing was done until 1880, when some of the masonry and roof was repaired. In 1909 a bit more work was undertaken. And again in the 1920s. Then in 1937 the stained glass windows were restored.

A Green (Wo)man in the porch. 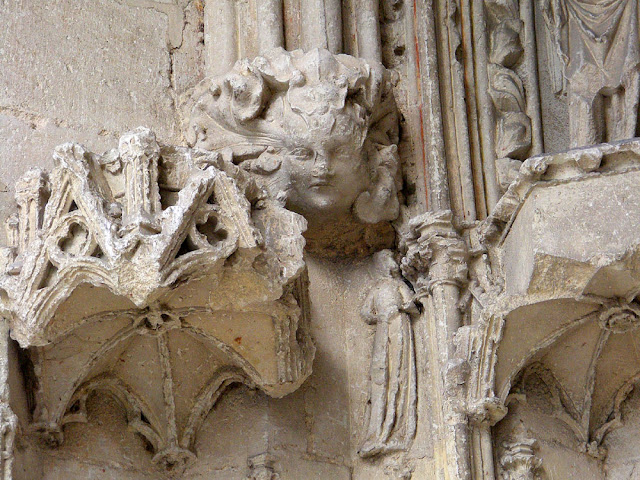 The tympanum over the main door depicts the life of Mary Magdelen.
There is a double row of carvings around the arch, depicting saints and angels. 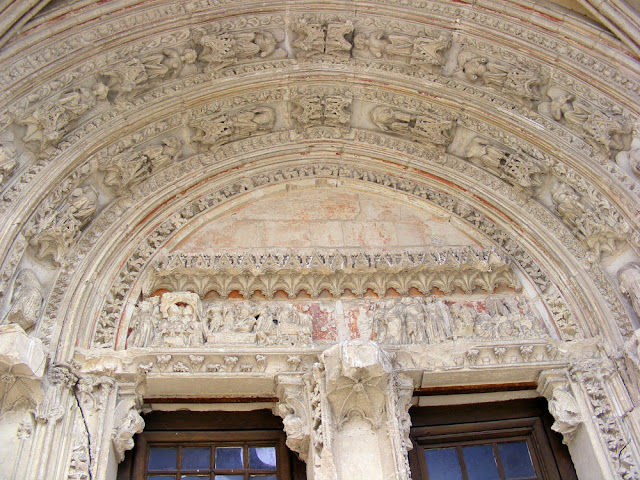 The beams across the nave are decorated with heraldic devices or other colourful subjects. 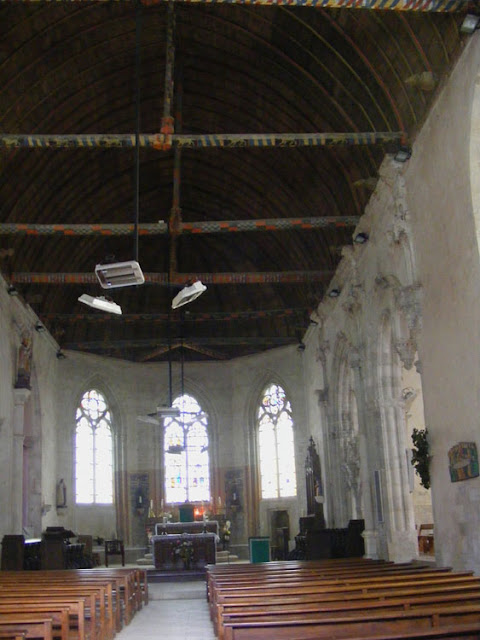 The southern 16th century chapel is separated from the nave by an Italianate balustraded stone screen. Ken and chm visited the church in 2011 and Ken blogged about it here.


The vaulted ceiling of the Chapelle d'Anjou. 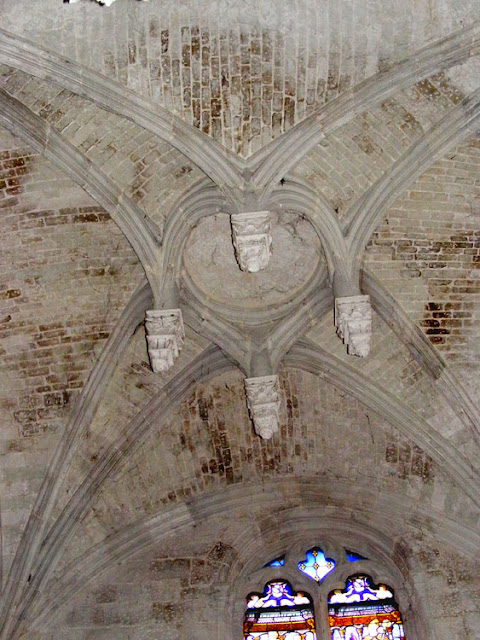 A misericorde from one of the Saint Cyran choir stalls. 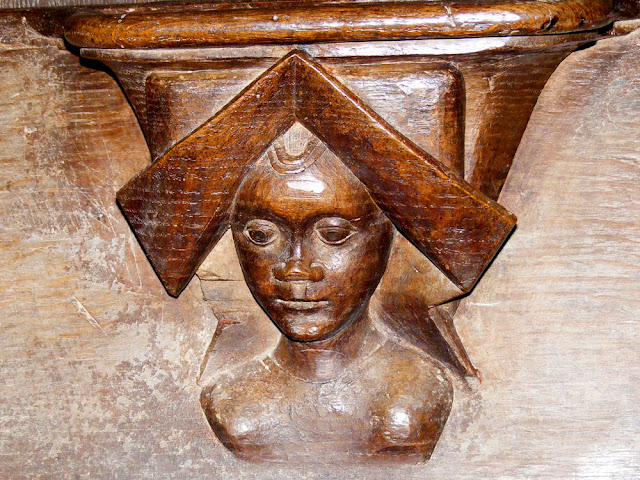 And I haven't even shown you the stained glass yet!

Email ThisBlogThis!Share to TwitterShare to FacebookShare to Pinterest
Labels: Churches, the Brenne

As I said before, for some reason, I don't have any recollection of this church even though I remember very well the rest of the day: the lunch with problems with my credit card, our walk along one of the étangs, the night heron perched on a faraway tree and, fiinaly, some beautiful blue damselflies!