Emergency exit above the door.
The wall between the rustic carpentry lintel and ceiling beams is covered with brown carpet. 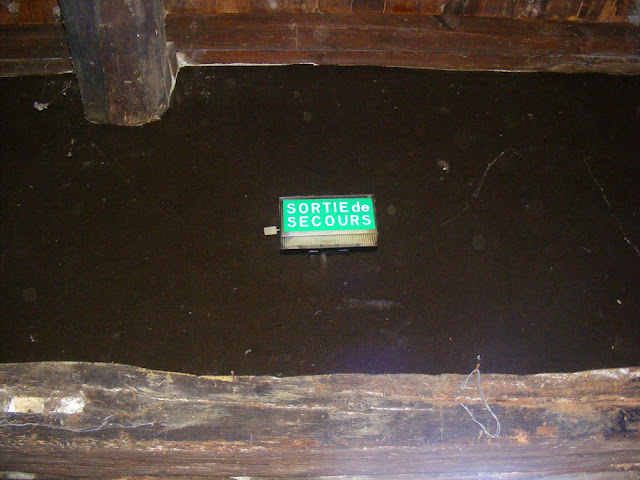 Friends of ours, Simon D and Lisa, have just bought a lovely house in a nearby small village. As a result they have also acquired the village disco -- or at least, the building that served as the village disco until sometime in the 1980s. It is a separate building, on the other side of the street to their house, and these days has reverted to its original purpose, as a barn. 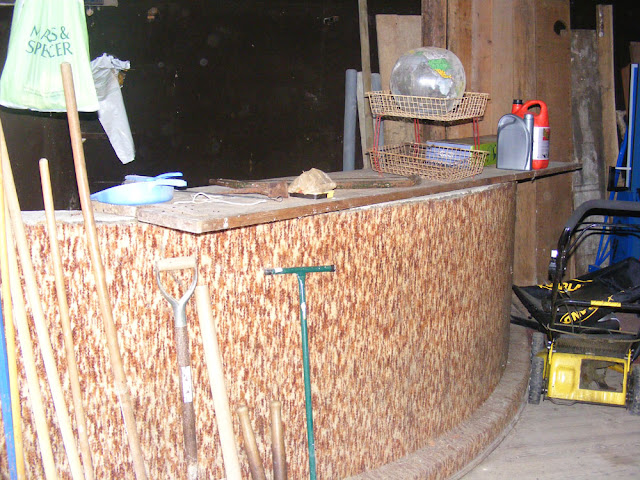 On the outside it looks like a perfectly normal, charmingly rustic, Touraine barn built out of limestone and terracotta. But the traces of its life as a nightclub are still clearly visible. On the inside everything is covered in brown carpet! And there are mustard carpet covered booths on a raised platform around a dance floor!!

Booths covered in mustard coloured carpet. I must say that the seats look jolly uncomfortable. 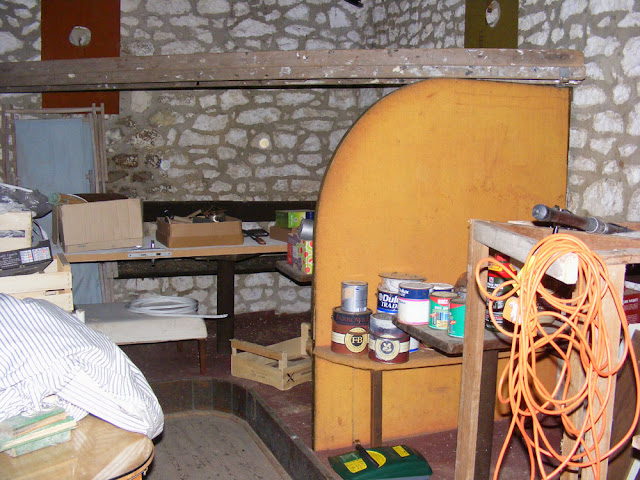 The story they were originally told is that the disco closed literally overnight when the body of a murdered man was discovered on the doorstep. Supposedly the investigating detective arrived, drew a chalk outline around the body, departed and nothing was ever heard about the incident again.


On the outside, a perfectly ordinary Touraine barn. 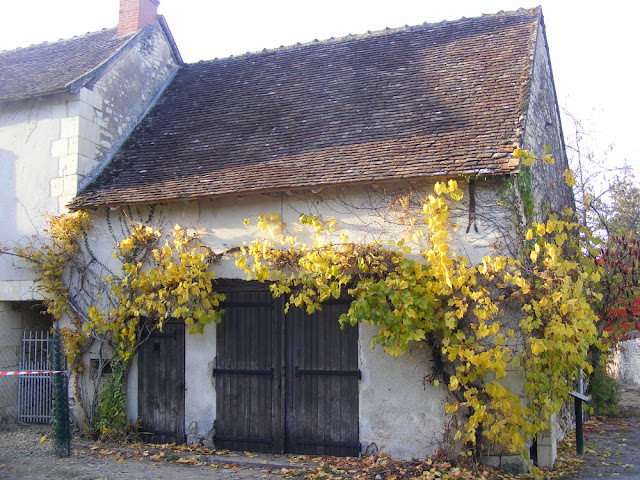 A visit from a neighbour on Thursday shed some more light on the murder mystery of the 'night club.'  Apparently it was quite the scene for disco and also French punk in the late 70s and early 80s, managed by artists from Poitiers. On the last fateful night it was in operation a former army guy showed up and got into a row with one of the regulars -- a fight spilled out into the area in front of the night club and the army guy stabbed his adversary to death. The club never reopened. No idea what kind of investigation or punishment followed. Bizarre all the same! More research needed.


He is hoping "maybe others who know more will come forward, or correct the version I heard!"
Posted by Susan at 09:00

Email ThisBlogThis!Share to TwitterShare to FacebookShare to Pinterest
Labels: Boussay

Sounds like regular disco nights around Matlock in the 70's, there was usually some kind of punch up, although never a fatality to my knowledge.
I'm not sure how I'd feel about owning a barn with that kind of history. But then with these old buildings chances are that something nasty occurred at some time.
I think I'd prefer not to know.
I as slightly put out when Mme André told us that the owner three times removed died when he fell down the stairs in our house. I'm hoping she had us confused with somewhere else.

What a lovely old building, if it isn't needed for a barn or guest quarters it would make a charming B&B or art co-op and outlet, people will often buy from an artist working on jewelry, textiles, painting, pottery etc.

In Andover Mass, a local (quite successful!) restaurant/bar was once a funeral home...aside from a "oh is that right?" it doesn't seem to bother anyone, and the food is quite good!

Will be fun to find out more about the "mystery"... I think the barn is charming

Charming building indeed! They can make their own more peaceful history

Lisa is a potter, so maybe she has that in mind.

Most people here must live in houses where people have been born or died. I don't think it bothers them overly.

I'm sure that is their intention.

Unfortunately the new house!
When we told her that's where we were moving to that was the first thing she told us!
I think the new staircase is probably a lot safer than any that were there before.

And you've replaced all the bloodstained floor tiles!

I knew a chap who'd bought an old stone house in the Maine et Loire and renovated it to a high standard, with much help from his new neighbours.
When it was habitable he invited everyone round for a drink and there was much mutual congratulation.
The old boy over the road kept looking at the ceiling...the chap thought he was admiring the beams, newly stripped and waxed and he was..in a way.
'That one there - that one - is where Jean-Marie hanged himself...'

Rural despair is nothing new.

I'm amazed it took the neighbours that long to pass on the information.

It might have been tactless to do so while the works were proceeding...