Destruction of a Vine Hut

In September last year we noticed that a very distinctive vine hut with a pyramidal roof that sat up on the hill to the left as you leave Loches on the D764, between the two roundabouts at Les Ees, going towards Amboise, had been damaged. It sat in the middle of a ploughed field and our guess was that the farmer had hit it with some farm machinery, causing it to partially collapse.

We waited with interest to see what would happen next, as we were under the impression that all vine huts were protected. Would the vine hut get repaired we wondered. We assumed that, given time, it would be.


How wrong we were. A couple of months ago all traces of the vine hut disappeared. We wondered if it had been dismantled to erect elsewhere, in a location that was more convenient for the farmer. Wrong again. We have just discovered what is really going on, thanks to a newspaper article detailing the fight between Pascal Dubrisay, former Loches councillor with responsibility for heritage, and the current mayor of Loches, Marc Agenault.

Dubrisay claims the council has done nothing to protect the vine hut, which was, as we suspected, destroyed by the farmer. The mayor says they did their best to acquire the stones (presumably with a view to reconstructing it elsewhere) but the hut was not a listed building and had no particular legal protection (this is news to us, but is presumably true...) so it was up to the farmer what he did with it. The mayor also says it does not help that Dubrisay refused to meet with his successor, the new councillor with responsibility for heritage, Stéphane Blond, for a handover of duties.


An unusual vine hut that has been rescued and relocated to the 'reserve' near Bléré. 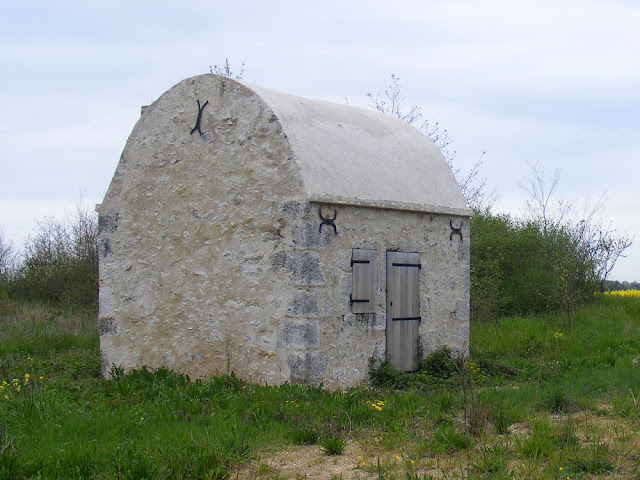 Dubrisay now admits that the vine hut was not a protected building and therefore the farmer was within his rights to destroy it if he wished. What he still finds difficult to accept is that in a town that prides itself on its cultural and built heritage that every effort was not made to find financing to restore and relocate the building. He can't believe how easily the council gave up on a piece of Loches' winemaking past. He also disputes that he refused to handover to his successor. Rather, he says, he tried to set up a meeting but was rebuffed.

There are about 30 surviving vine huts in the Loches area, which once served to shelter vine workers and their horses. A few are lovingly maintained by their owners, most are in a delapidated state. They went out of use after the Second World War, as agriculture became more mechanised. The one at Les Ees seems to have been unique and special, with its pyramidal roof and its early date of construction. It is believed to have been an 18th century hut, whereas most of the huts date from the 19th century or even the 20th century.

We think it is a shame that such an interesting little building could not be saved. It would have been quite easy to reconstruct on another site -- perhaps one of the roundabouts close by or in the 'reserve' for relocated vine huts that has been established on the industrial estate ZAE Bois Gaulpied between the A85 motorway and Bléré. We await developments, if any, with interest.


To see photos of the vine hut as it was, and in ruins, see this article in the local paper.


One of several medieval statues of the Madonna and Child
on display at the church of Saint Antoine in Loches. 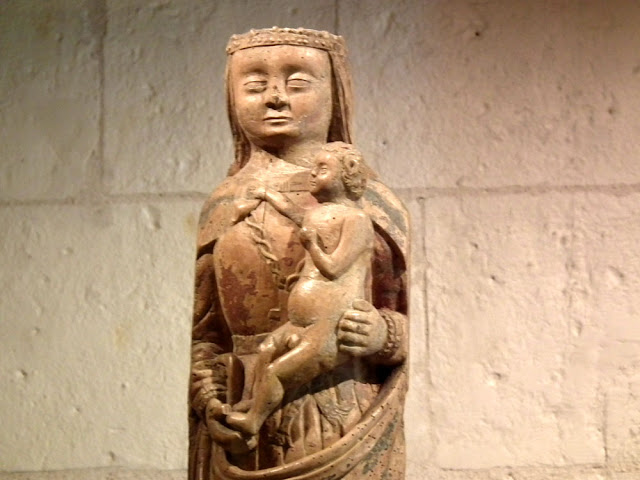 The vine hut is not the only cultural icon Dubrisay is concerned the council is not protecting appropriately. Apparently there is a small statue of Our Lady which technically is owned by the local authority and should be housed in the Church of Saint Ours (formerly Notre-Dame) on the Royal Citadel. The priest of Saint Ours gave it to the church in Ligueil in 2011, but they say they no longer have it. It has recently come to light that it is currently in a private house in Loches. I have to say that I don't recall ever seeing this statue in Saint Ours, although I must have done so. I can't work out how old it is from the picture I have seen either.


The chancel of Saint Ours in 2006. No sign of the statue and
I don't recall ever noticing it prior to its removal. I've no idea where it was in the church. 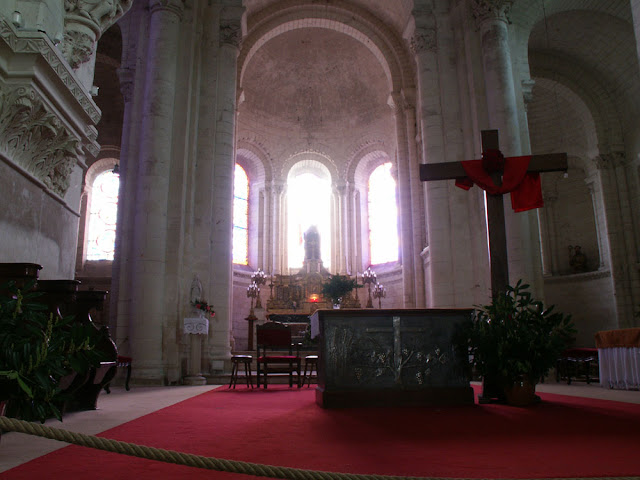 Loire Valley Nature: A new entry has been added for Common Tern Sterna hirundo, a delightful summer visitor to our rivers and lakes.

That is sad....
the roof was a stone slab roof, using no timber...
rather like the "tombs" in Caithness and Orkney....
which is why it was in such a remarkable state of preservation.

Yes, that about covers it.

I second Tim. The farmer involved here is probably of the same cloth as Mrs Clinton's "deplorables".