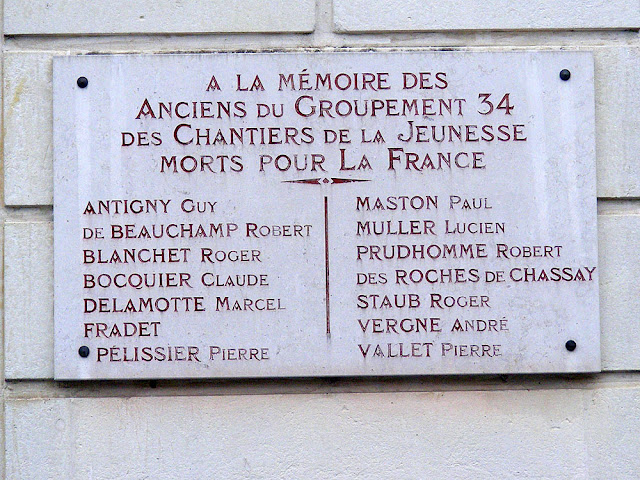 This memorial to 'Groupement 34 des Chantiers de la Jeunesse' (Group 34 of the Youth Public Works) members who died in the Second World War is fixed to a building in the market place in Mezières-en-Brenne.

Les Chantiers de la Jeunesse Française (CJF) was a paramilitary organisation which existed between 1940 and 1944. It was intended as a means of training and moulding young French men. The armistice between France and Germany in 1940 ended compulsory French military service and the CJF was quickly set up as a sort of subsitute for those in the Zone Libre and North Africa. The young men joined initially for a voluntary 6 month stint (later for a compulsory 8 months) and lived in camps under quasi-military rules. The officers were serving military or demobilised reserves. They performed community service work, especially forestry.

It is an organisation regarded with some ambivalence. On the one hand, they espoused Revolutionary values. On the other hand, the organisation was complicit in the Service de Travail Obligatoire, which saw thousands of young French men sent to Germany as forced labour, never to return, and the officers did not encourage members to join the Resistance, even in the final stages of the war. Another problematic aspect of the organisation was that it actively promoted a cult of veneration of Marechal Pétain.

After the Armistice came to an end and Germany occupied the whole of France the French armed forces were disbanded, but the Germans chose to keep the CJF going. They did take the precaution of relocating the groups along the borders to other areas however, in case they were in league with the Resistance and the escape route helpers. In fact, several groups did independently 'defect' to the Resistance and got themselves and their gear to North Africa. The Resistance in France prior to the D-Day landings lacked everything and regularly helped themselves to CJF uniforms, tools and stores.

In 1943 the CJF General La Porte du Thiel refused categorically to allow the CJF to assist the Germans in anything that might be of benefit to the occupying nation. The CJF was restricted to performing tasks that were of benefit to the French population. At the same time the General refused the advances of the Resistance to bring the CJF to North Africa. Ultimately he was arrested and put under house arrest in Germany.

When Service de Travail Obligatoire (Compulsory Work Service) was introduced 32 000 young French men born in 1920, 1921 and 1922 were called up. Half of them were sent to the forced labour camps in Germany, often in their CJF groups, and their CJF officers went with them. The officers, who very often were only a couple of years older than their men, tried as far as possible to protect their young charges, and were staunchly anti-Nazi.

The most famous of these brave young officers is Georges Toupet, who found himself in charge of 2500 young men at the age of 25. His camp was next door to the notorious Auschwitz-Birkenau. As well as fighting against the system of leave passes, the filthy unhygenic conditions, alcoholism and prostitution, he established a rich cultural, sporting and educational life for his men, and maintained a remarkable degree of discipline and order, certainly contributing to the survival of the group. He also established an escape route for prisonners of war and communicated information about the neighbouring death camp. He died in 2007, an honoured hero in France and virtually unknown outside French borders.

A 'Groupement' in the CJF was like a regiment, made up of 6 - 12 groups of 150 - 200 men. Number 34 had its headquarters in Mezières-en-Brenne initially, then later at La Rochelle. They were disbanded in June 1944 and assigned to chantiers bleus de la production industrielle (blue collar industrial production).

A la cuisine hier: Simon's macaroni cheese from the freezer, served with a green salad. The BioBoys had nice celery at the market on Thursday, which they sell by the leafy stalk. I was very happy to buy some and add to the salad yesterday. I don't very often see nice celery here and it suits me to buy a few stalks rather than a whole bunch.

We've eaten and enjoyed the last of the Italian carrot cake. Yum.

Simon's sausage and bean casserole from the freezer, with couscous.

Pineapple custard meringue, a dish from my childhood that Tim F reminded me of the day before. It was like this recipe, except that I had a leftover egg white and some leftover supermarket custard to use up. I used pineapple chunks too, because I prefer them, and anyway, crushed pineapple doesn't exist in France as far as I know.

It's always so interesting to me to read histories like that about WWII...and so difficult to imagine how they carried on with life.
Lucky you being able to buy celery by the stalk. Our best celery comes from Mexico which is at least properly blanched. When it's from California the stalks are all green and too strongly flavored until the very center of the bunch. Must be something to do with the cost of the labor.

Celery is seasonal here, and good celery even more so. Sorry Sheila, but blanched celery belongs on the list with marrow, endive and chard stems :-) I thought that the green versus blanched celery split must have been cultural, like the green versus blanched asparagus, but it seems that there may be two varieties of celery, one grown in the summer (green) and one which is frost hardy, grown in the winter (white).