Fungi in the Forest of Preuilly

The Association de Botanique et de Mycologie de Sainte Maure de Touraine held an outing to the Forest of Preuilly on 13 November. Very few of the club were able to come and we found very few fungi because of the continuing relatively dry weather (it's been raining, but not enough and not long enough to encourage many fungi species). I had a good time nonetheless and took lots of photos. Here are some highlights: 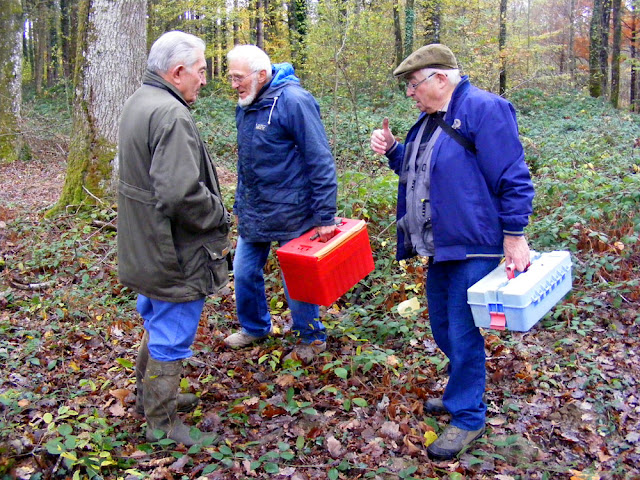 These men are some of my local nature gurus. They are all in their eighties (in fact, it was Paul's 84th birthday on the day). 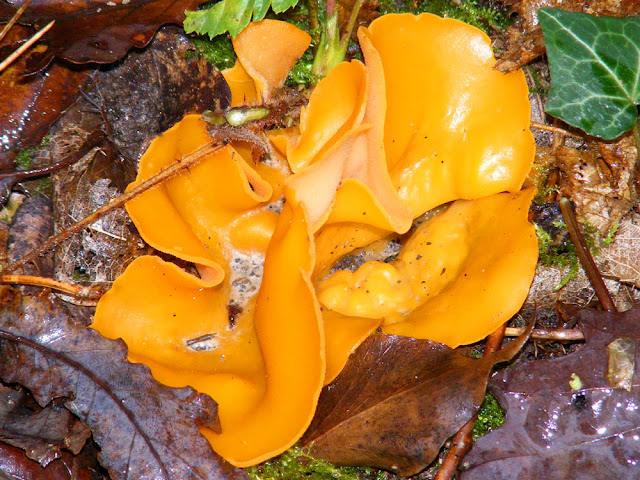 This is the biggest Orange Peel Fungus I've ever seen, and it was busily puffing away, dispersing its spores by ejecting them in clouds. 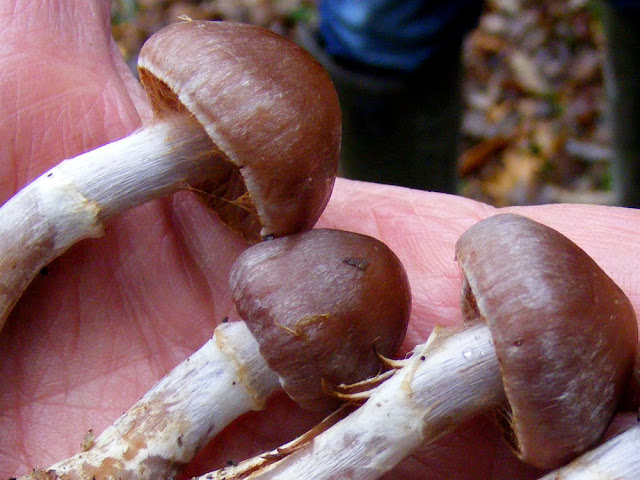 The spores of this species are ochre coloured and you can see that they have coloured the wispy web like remnants of the veil under the cap. 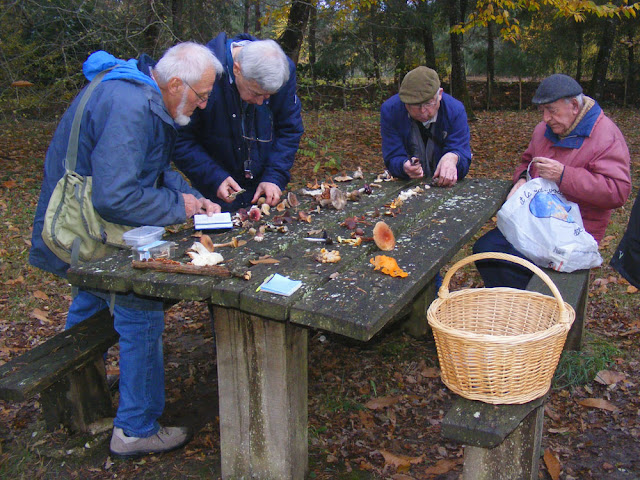 You can see how few fungi we collected. Normally this table would be packed with specimens at the end of an outing.


The carpark at Ribaloche on 13 November. 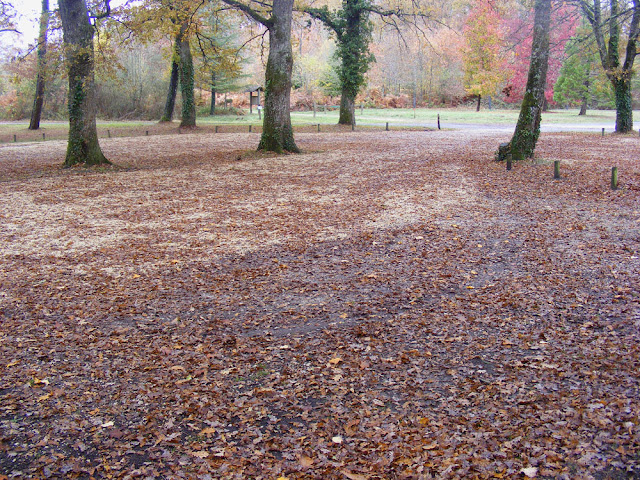 A generous sprinkling of leaves. Compare with ten days earlier when the leaf blowers had been through.

This oak tree obviously had quite a population of some large insect. 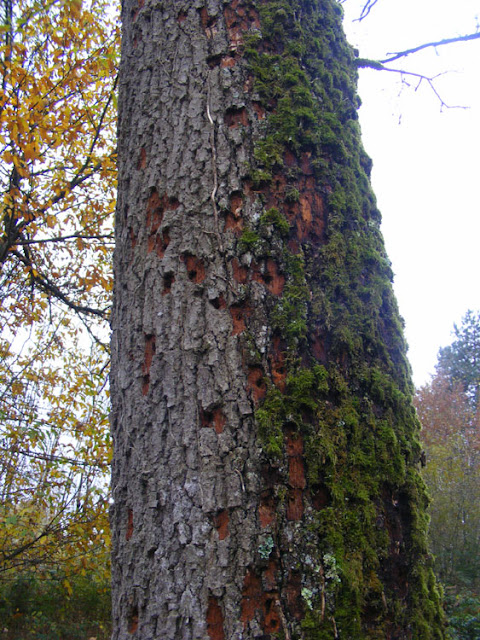 I don't know what made these large exit holes in this oak tree. Goat moth? One of the big longhorn beetles? Or are these not really exit holes but evidence of woodpeckers hunting for larvae in the wood? The loss of the bark plate surrounding the holes suggests it might be the latter. 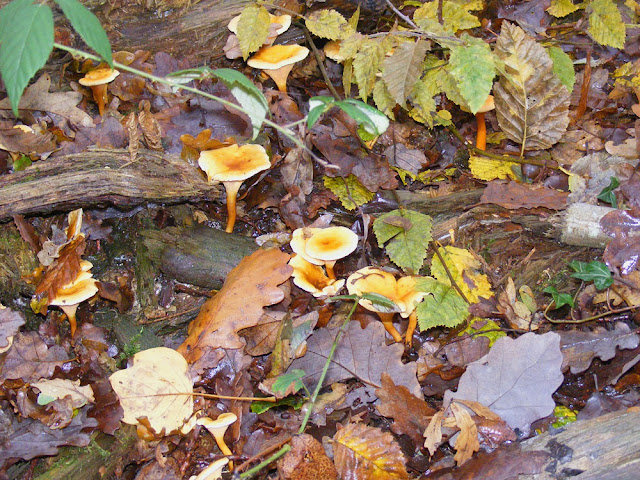 This species was one of the few which was abundant. Despite the prefix 'false' this is an edible species, just not related to true chanterelles. 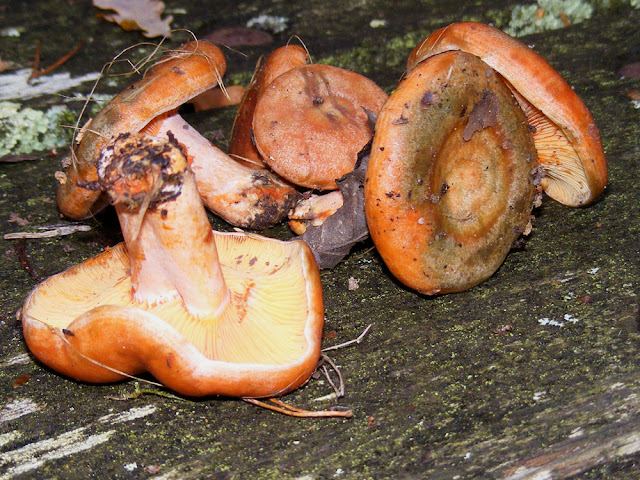 A la cuisine hier: I made two sorts of cheesy crispy things yesterday.

The first was Arizona Cheese Crisps,which are just about the most delicious things on Earth and we eat them at least once a fortnight. I use the big Turkish flatbreads rather than tortillas proper, and some dabs of piri piri rather than slices of chilli.

The second was sebaclas (Sardinian Cheese Biscuits), made with semolina and parmesan (because I didn't have any pecorino), from Ursula Ferrigno's Bringing Italy Home. These are traditionally served with honey but I served them with homemade apple syrup (ahem...aka apple jelly that failed to gel). Simon wasn't convinced by the apple syrup (but he wouldn't have liked honey either).

Tuesday's carrot cake is holding up well and was just as delicious yesterday.

Leftover chicken in bhuna sauce from a jar with added vegetables, served with plain rice. Not very inspiring. Followed by homegrown apples made into crumble and served with supermarket custard.

It's so disappointing this year. Jean Michel went mushroom collecting about 10 days ago and came back with a basket of false chanterelles which we cooked up and froze. We've been having them in omelettes ever since. I'm hoping that we'll start finding pieds de mouton soon since we've been having all this rain.

Indeed, this is the worst year for mushrooms I've ever seen here.