Mezières-en-Brenne is one of those places that it is very easy to drive through and think it is a fairly dull place. What you don't really realise is that the road through town skirts around the old centre and market place. Once you stop and walk around a bit you realise what a quirky and attractive place it is. Here are some highlights.


Looking down the millstream. 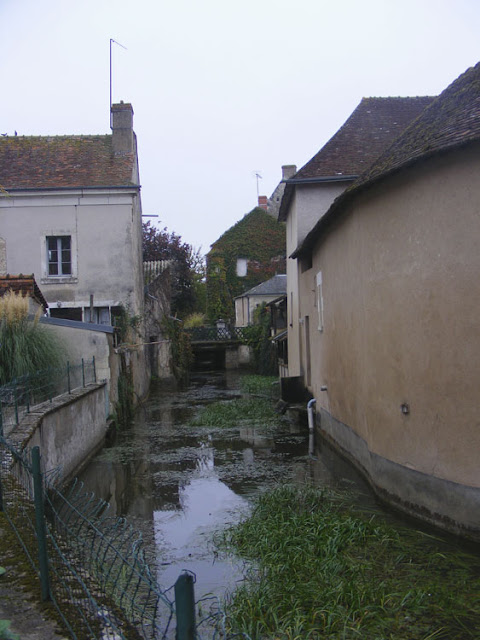 A renaissance doorway into what was part of the chateau. 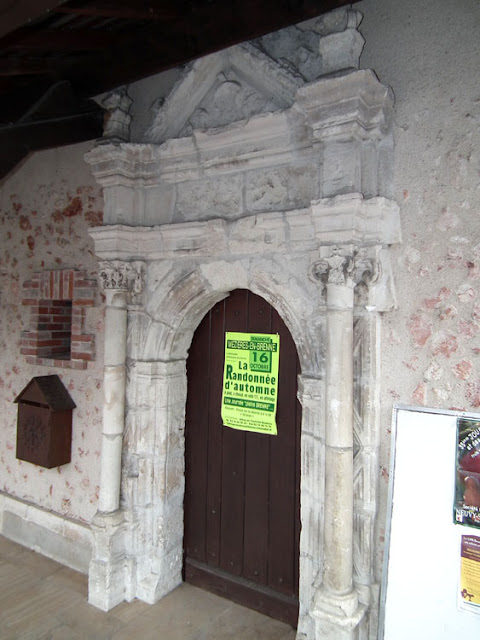 A piece of modern art, which I think must have been done in the fresco technique,
on the exterior wall of the contemporary art centre, Espace Mario Alvarado. 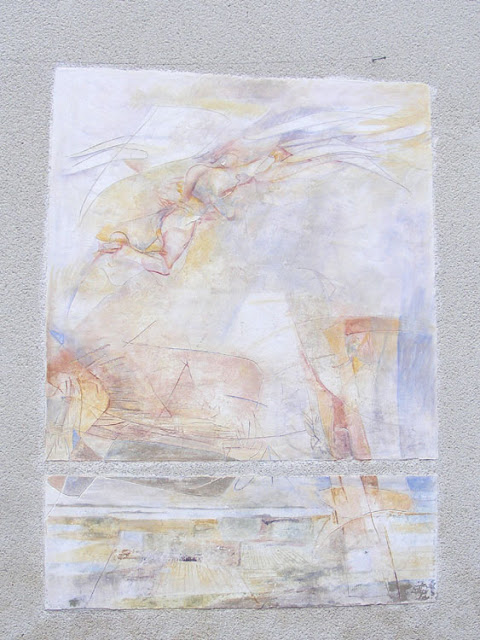 Another part of the dismembered chateau. 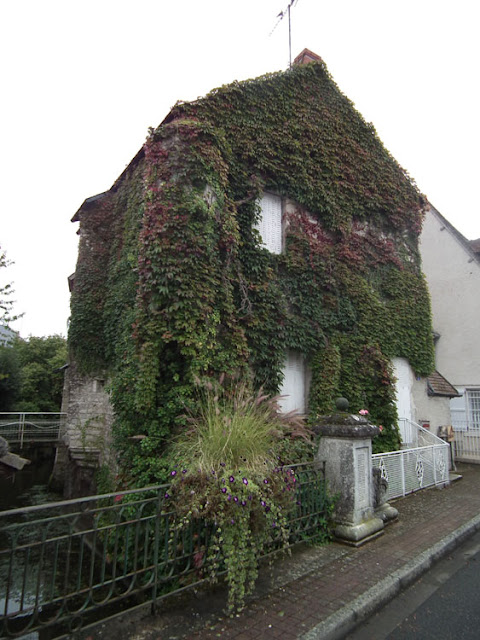 What the building above looks like without its cloak of Virginia Creeper. 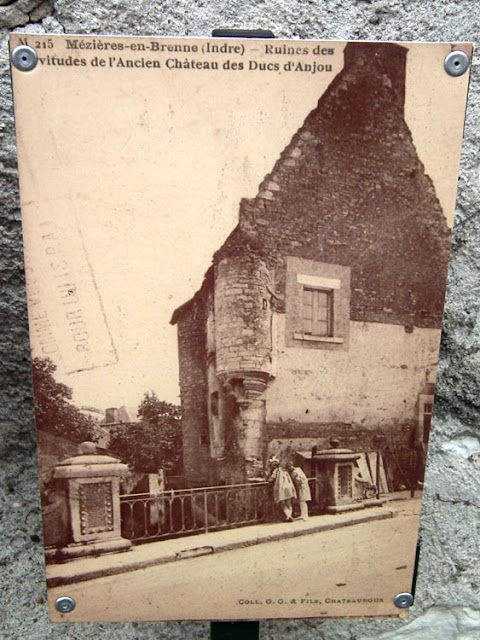 Composite millstones, outside the Tourist Office. 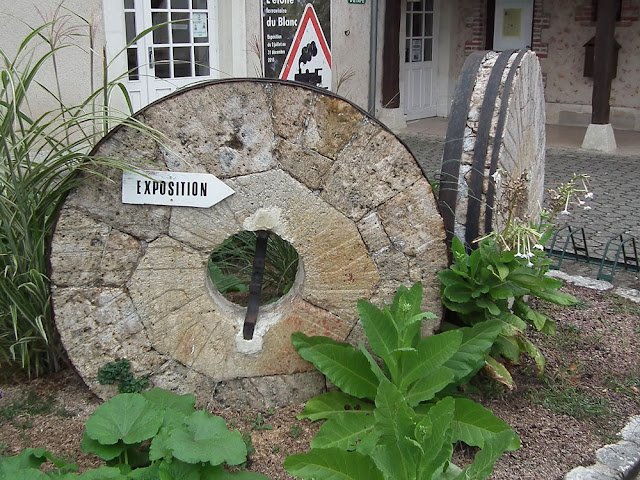 The watermill itself houses the Tourist Office and a gîte d'étape (kind of like a youth hostel). It is built onto part of the remains of the chateau.


Yet another part of the medieval chateau.
This bit has been turned into the Museum of Fish Farming (Pisciculture) and Local History. 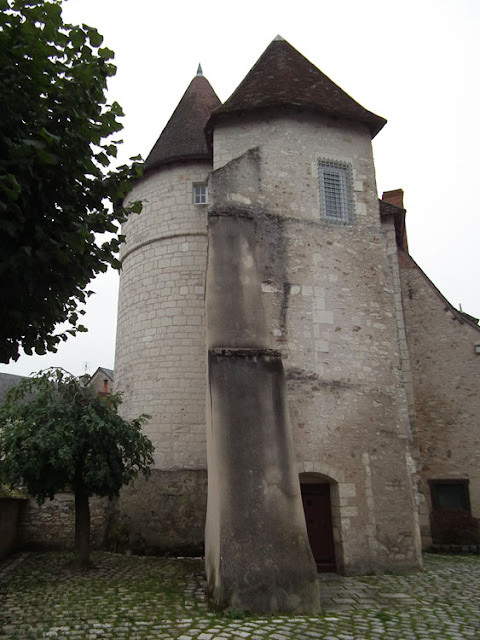 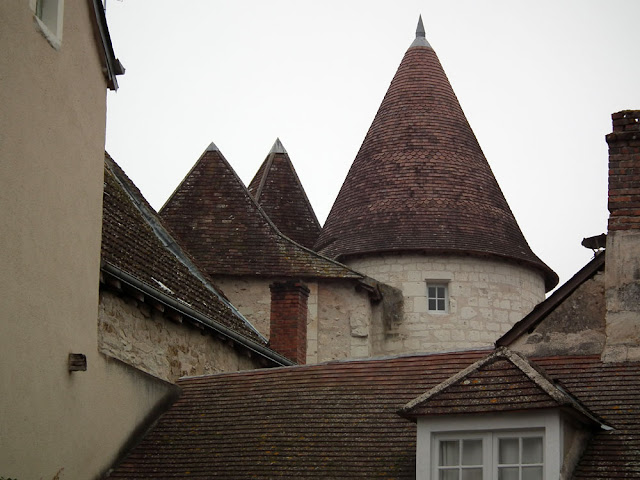 A beautifully restored entry to an old home. 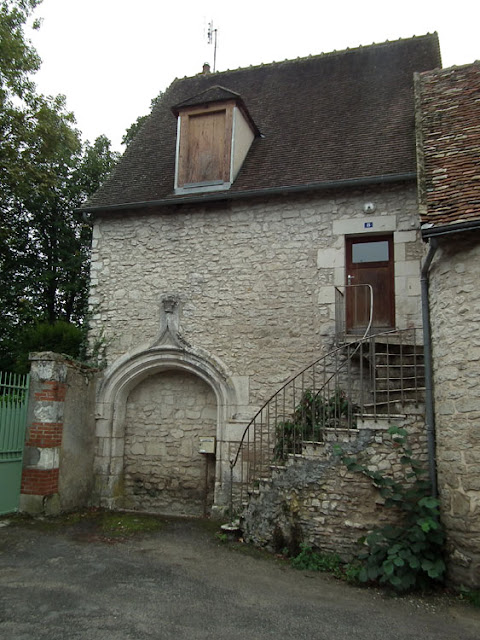 An old window in the end of a barn. 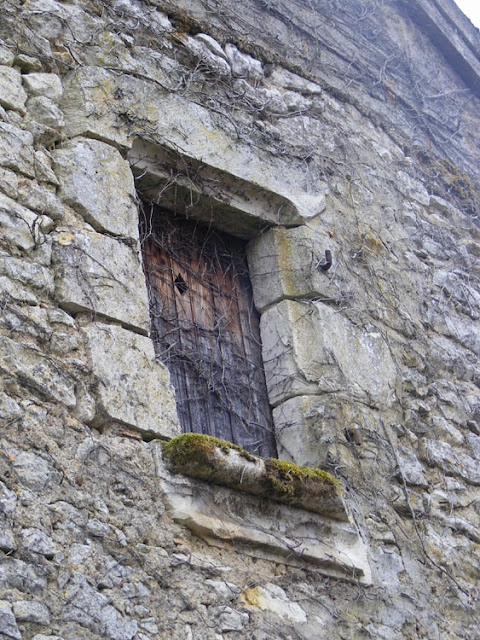 A la cuisine hier: Nothing to report except leftovers -- cake, soup, chicken and mashed root vegetables. Leftovers are les restes in French.

Au marché hier: The weather yesterday morning was extraordinary. Depending on which way you looked, over the market the sun was shining brightly, the sky was caerulean blue and it was warm enough to go out to the market without your coat; or -- if you looked down the valley, the sky was battleship grey and heavy with moisture. The sunshine brought out a crowd and I had to stand around waiting my turn to get certain things.

At the BioBoys stall the person in front of me snaffled all the chard. 'Zut !' I said. He laughed and offered me half a dozen leaves. 'Nous pouvons le partager' (we can share it). He offered me another couple of leaves, but I said 'Non, merci, ça me suffit'. 'Ah', he said, 'C'est ton dose, hein ?' (that's your dose, eh?). Then we discussed which bits of the plant one eats (seeds, leaves, stems, roots, depending on your culture and background).

At the chicken and rabbit stall there was a line of half a dozen elderly men and women, all chatting to one another and taking ages to do their business with the stall holder, who was joining in the chat. I was the youngest person in the queue by a good 15 years, and by a good deal more than than that compared to a couple of people. Naturally the talk was of the weather, how extraordinary it was, how unseasonal and how bizarre the weather has become in general. One of the men said he feared that the seasons were all out of whack because the Earth's axis was tipping. 'Personne parle de ça' (nobody talks about that), he said. Then there was a lot of joshing about the bouchées de lapin (rabbit vol au vents), which I didn't quite follow, but seemed to be about the quantity one old woman was buying and her excuses as to why she needed so many. The man next to me was carrying two market baskets and he remarked to me that he was just un cheval de trait (a cart horse), there to carry the goods. He kindly thwarted a queue jumping attempt by another woman. Her technique was to come up to the queue and engage several people in conversation, slowly infiltrating her way into the line in a way she no doubt imagined would go unchallenged. However, my defender pointed out that I was before her, which meant that she then had to make a big song and dance of excessive politeness about how I must go first and what was one place in the queue after all, etc.

The man who grabbed all the chard sounds like someone who doesn't really care for it, or thinks you don't. J'en ai eu ma dose means I've had as much of [something] as I can stand — as if the food or whatever is an evil-tasting medicine.

As for restes, there's a whole area in cooking called l'art d'accommoder les restes — how to make the most of your leftovers. And there's another term — la desserte, viande de desserte — that applies specifically to leftover meat. We cook that way, as with our lamb roast yesterday. We buy more that we could possibly eat on the first day and then plan out how we will "spruce up" what's left over the following few days. Today, it's cold lamb with steamed potatoes and mayonnaise, followed by a green salad.

Oh, and as far as lines in markets or supermarkets are concerned, it's always been a free-for-all here in France, at least compared to the U.S. You have to stick up for yourself and deter the line-jumpers from taking advantage.

I think the nuance with the chard was that he was acknowledging that many people don't like it. He was pretending that he thought I didn't like it because I didn't take as many leaves as he would have.

My leftovers were unremarkable because I made no attempt to spruce them up. I like Sonia Ezgulian's clever and creative way with leftovers.

I know France has a reputation for not queuing, but I've never found it to live up to it. Mostly at the market, people queue and the market stall holders pay attention to who has been there the longest, and on big popular stalls you sometimes see a sign that says 'queue this way'. It's pretty much like Australia.

I once had a French woman queue jump me at the café in St Pierre des Corps station. I pointed out she had done so and she bought me a cup of coffee!

Did the man at the market really use the tu/toi form with you? That would be unusual unless you knew him already. Vous/votre would be more conventional.

Yes, he wasn't a stranger. He's someone I'm on friendly terms with, I know his wife and sister in law, he's 10 or 15 years older than me. All the regulars at the BioBoys stall tu one another, and the BioBoys themselves tu and bise the customers. He reads the blog occasionally btw :-) We also discussed what the English for blettes was.

Chards and salsifis are not amongst my favourite foods I have to say. Last week at the market, I wasn't paying attention and jumped the queue twice! I realised it before I was served each time though and apologised. One man, whom I thought was just dillydallying, told me that women were always in a hurry then proceeded to take as long as he could to punish me saying that I had caused him to dither even more. What a sod!

I love chard leaf -- it has a wonderful silky texture and good strong earthy flavour. I don't bother with the stems -- they come under the same category as marrow, white asparagus and artichokes -- too subtle a flavour for me. I've never tried salsify. I've tried growing it a couple of times with no success. I suspect there is a reason it's a forgotten vegetable.