Operation Save the Chapel

This is my translation of the article in the local paper about the fundraising campaign to save the Chapelle de Tous les Saintes in Preuilly sur Claise.

The chapel of All Saints in Preuilly sur Claise is decorated inside with very rare wall paintings of a danse macabre and a wooden ceiling dating from the 16th century.


The chapel with its new fundraising poster stuck on the gable. 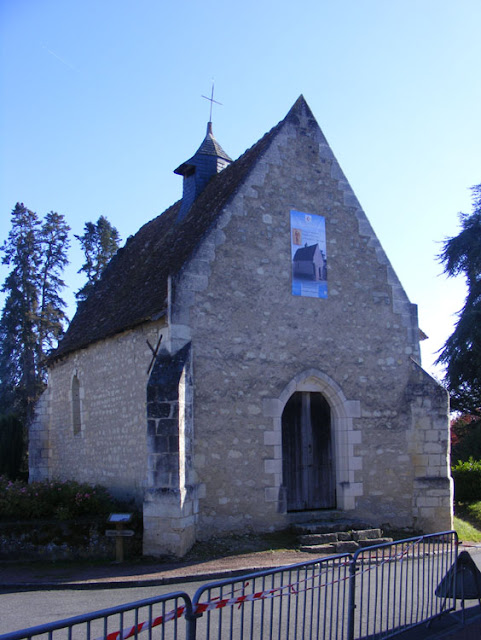 The building is in a very bad state, necessitating significant urgent restoration work.

The local history society (SAP) has worked for some years to save the monument and has opened a subscription.

With this aim an agreement was signed on Saturday 22 October between the Preuilly Town Hall and the Heritage Foundation. Around twenty people attended this event. Gilles Bertucelli, the mayor, thanked the Foundation for its help and the SAP for their work to seek out finance and put together the documentation.


The very rare dance of the women inside the chapel.

He indicated that tenders were about to be called, to begin work in the spring of 2017 (finances permitting).

The signing of the agreement will allow requests for grants to be submitted to different organisations. Jacques Guionnet, Heritage Foundation representative, explained the different types of activities that can be administered by this association to collect funds and organise the subscription.

He also described the tax advantages that are connected to this. The president of the SAP, Bernard de la Motte, urged everyone to become an ambassador for the chapel to encourage all their friends to donate.


The dance of the men.

Jean-Philippe Barthel, the architect in charge of the project, underlined in a powerpoint presentation about the restoration just how interesting the total homogenity of this chapel from the end of the 15th century is.

He envisages making a presentation to the public on the site before and after the start of work to explain the project and convince the people of the merits of such an operation.

Donations can be made via www.fondation-patrimoine.org/42863

To see our previous posts on the chapel and its danse macabre, click here.

Loire Valley Nature: A photo has been added to the entry for the last orchid species to flower, Autumn Lady's Tresses Spiranthes spiralis.

A la cuisine hier: The other day I served rice with something, and as usual I cooked extra so I could make fried rice for lunch. Followed by a home grown Granny Smith apple and a couple of homemade old fashioned macaroons from the freezer.

Simon's bean and sausage stew from the freezer, with couscous.

Dessert was individual Chocolate Souffles. Bernadette, Monica, Chris and I had made this from Bernadette's recipe at English-French conversation club the day before, so I decided to make it at home for Simon. Note to self: don't make them too big. They are really rich (lots of dark chocolate, cream, eggs and not much sugar).

I'll try, in the next few days, to sort things out with M. Bieuville, the director of the Heritage Foundation. Then, I hope to be able, finally, to make my intended donation. I'll keep you posted.

OK, thanks, I got your email.