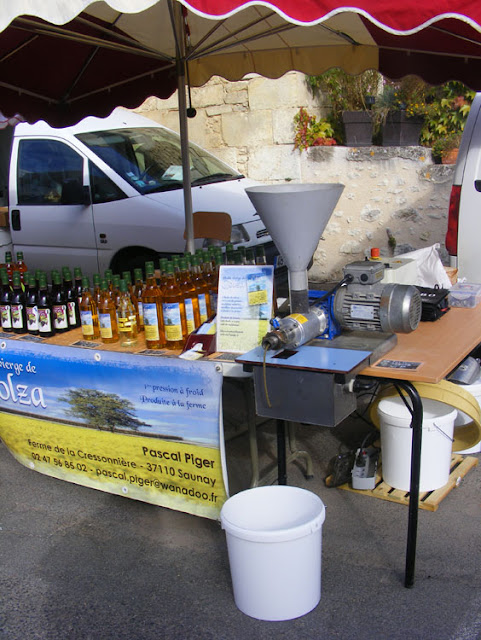 I was interested to see this canola oil press in operation on the producer's stall at l'Art et Lard in Le Petit Pressigny in October. What interested me as much as anything was how small scale it was. I haven't tried the oil but perhaps I should.

The producer wasn't anywhere in sight so I couldn't quiz him about it. I presume the husks get fed to chickens or something. Pellets made from canola waste are often used to feed animals, including dairy goats. You can see the waste coming out as a string that falls into the white bucket. 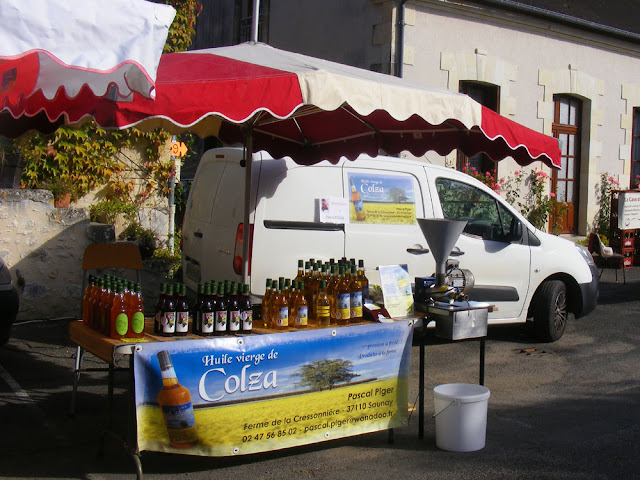 According to the farm's website they produce canola and sunflower oil, and wine vinegar. The canola (Fr. colza) and sunflower (Fr. tournesol) is grown on the farm, the wine for making the vinegar is purchased from local winemakers. The canola oil is clearly the main product and the website describes how it is made, and includes an infographic to explain the difference between cold pressed oil and industrially extracted oil.

The oil is virgin, that is to say, it is the product of the first pressing, unmixed with later pressings. Before the pressing the seeds are meticulously sorted to make sure any insect contamination is removed. The oil is extracted, using a technique that does not raise the temperature of it beyond 50°C. Contrary to normal practice the oil is not then filtered. Instead it is left to settle and slowly decanted. The finished product is clear and delicate, and has retained all its nutritional components and aromas.  Use it for flavouring and cooking but it is not suitable for frying.

Loire Valley Nature: A new entry has been added for the common but lovely fern Harts Tongue Asplenium scolopendrium.

A new entry has been added for Common Smoothcap Atrichum undulatum, an absolutely ubiquitous moss in the woodlands here.

A la cuisine hier: Pasta twists with a homemade sauce of tomatoes, peppers, aubergine, olives, green beans and chilli taken from the freezer. Topped with a dusting of parmesan cheese.