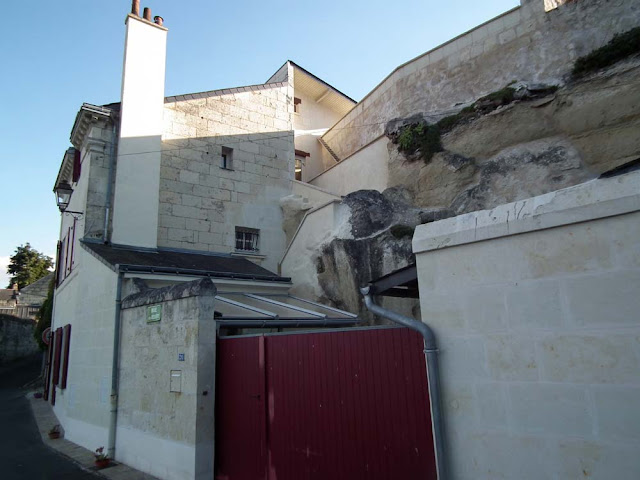 We love the look of this troglodytic house in Souzay-Champigny. Virtually all of the house is troglo, with the front facade meeting the natural rock on the left hand corner. I've no idea how many rooms there are. It could go a long way underground into the limestone cliff. We love the way the rock is not hacked away to neaten it up. It is more that the building moulds itself around the contours of the rock. At the back, up the top out of view, is a sun terrace.

A la cuisine hier: Pumpkin roasted, puréed, divided into two batches and put in the freezer.

Cooked apples suspended in the jelly bag in preparation for making apple jelly. Simon has just opened the last jar of last year's.

I've opened a jar of Carrot Honey. I bought it off our friend Jean-Luc, who is a cheese producer not an apiarist, but he sells other local producers' stuff in his boutique. I laughed when he pointed out the carrot honey to me. I'd never seen honey labelled as coming from carrot before, but he assured me the field the bees had been visiting was nearby. I think there is a farmer who grows vegetable seeds in the area so I am guessing that's where the honey came from. I don't think it's from wild carrot, but I could be wrong. The honey is quite dark, liquid, with a distinctive taste, quite strong and warm, with citrus notes.

Lunch was a huge plate of various salads -- celeri rémoulade, carottes rapée, roast beetroot in vinaigrette; 3 bean mix, sweet corn, butter lettuce, potato salad, tomatoes, kimchi, a boiled egg. All veggies organic from the market, all salads except beans and corn made from scratch including vinaigrette and creamy mayonnaise. Followed by a homegrown Red Delicious apple. Not my favourite variety of apple. They look magnificent with their shiny crimson skin, but even straight off the tree they lack flavour, the skin is tough and the flesh soft.

Dinner was Simon's beef, beer and barley stew, from the freezer.

Au jardin hier: I've finished the autumn mow so the whole orchard and vegetable garden has been cut at least roughly for the season (except for some strips I've deliberately left for wildlife shelter).

Everybody is out madly completing outdoor maintenance tasks. We have at least another week of dry mild weather and no one can believe their luck. The first half of November is normally wet, so it all has to get done before then.

Computer Woes: Our main office computer died about 10 days ago (mother board apparently). Simon ordered a replacement and it arrived yesterday. Unfortunately the package has been dropped somewhere en route and the computer damaged to the extent that it won't switch on. As yet no response from the suppliers regarding what they are prepared to do about it. Meanwhile we are sporadically trying to do Windows updates on my laptop. Unfortunately we don't have the spare three days it seems to require.

Are you on Windows 10 now? We've had good luck with 10, and the updates. Nothing has taken more than an hour or two to download. If you ordered the computer from the U.K., I think that could get complicated.

Sorry to hear of your computer woes...and nothing worse than those wretched downloads which seem to assume that you have an IT department behind you to keep you working while it all happens.

Those troglodyte houses are super, aren't they. We nearly bought one in Turquant years ago but were gazumped! The Parisians had struck!