Look at That S-Car Go! Sammy the Snail wins the lottery. He goes out and buys a Lamborghini. But because he is so ridiculously rich now he wants the car to be even more eyecatching, and he has the letter 'S' painted as large as possible on the sides. 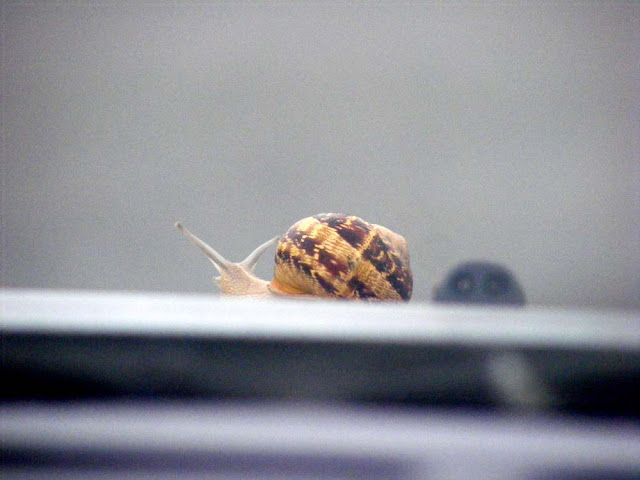 Driving down the street in his flash car he certainly makes people look. As he speeds down the street through a police radar trap, one policeman looks at his colleague and remarks, 'Look at that S-car go!' 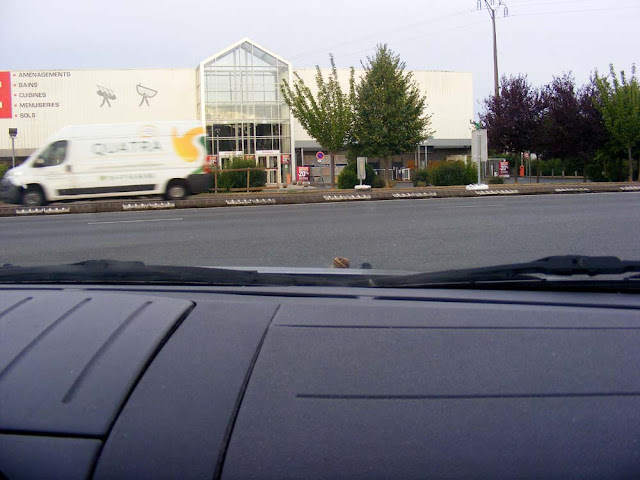 Simon tells me that this is one of his favourite jokes!? It was he who came up with the title for this blog post.

The snail on our bonnet was there one morning in September and we drove off without noticing it until on the road. I like to think he was enjoying having his little antennae eye stalks flapping in the wind, like a dog sticking its head out the car window.

It's just a pity we drive a Ford and not a Nissan.

Email ThisBlogThis!Share to TwitterShare to FacebookShare to Pinterest
Labels: nature and wildlife, The Car and Driving, Tours

I like the S-Cargo... it is a "pretty" van...
and there are about three that are owned by members of the UK 2CV fraternity!!
Now there's a surprise, non?

There is an 's' on the side of the snail, too....
And they aren't its antennae, dipterist, them's its eyes!! Well, one pair anyway...the other two bumps beimg the other pair.
Pauline got the last of the onions in yesterday... perfect timing! We've has almost twenty millipedes of rain here, overnight... the ground looks to have just swallowed it...
no change in the level in the millstream.
I thought I could hear the ground breathing in!

We got only 12 mm overnight. Now we are expecting another dry spell, just in time to start getting the pumpkins and winter squashes in. And the green tomatoes.

Meant to add that we had what we called a "car-top carrier" in the U.S. that was called an S-Cargo. We drove it 3,000 miles across the U.S. from Washington DC to San Francisco in 1986, packed full of stuff, on top of Walt's Subaru hatchback. It was a fun trip.

La honte ! :-) Simon pointed out that they were eyes as well.

Hope you drove at a snails pace!!!