Nazelles-Négron is a small town on the Loire directly opposite the much bigger and better known town of Amboise. There is some debate about whether the name Nazelles comes from the Latin for nave (of a chapel) or the Latin for boat. Either way, it is a charming place strung out along the river cliffs and running seamlessly into the neighbouring community of Pocé-sur-Cisse. We visited recently because we took Célestine to the specialist classic car auto-electricians there (who turned out to be nice young men who clucked over Célestine and neatly improved but haven't quite cured her problem yet - it seems to be at least partly aged cables, but her headlights are still flickering).


The bridge over the little River Cisse. 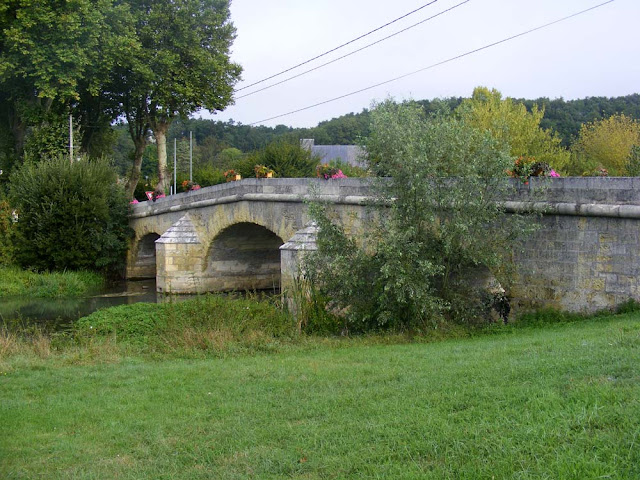 The Cisse runs parallel to the Loire, through the middle of Nazelles-Négron, and finally joins the Loire on its right (north) bank at Vouvray. When there is flooding in the area it is often the Cisse valley which is most affected. Twice in the mid-19th century the Cisse took the brunt of breaches in the Loire levee bank, being inundated with a large volume of fast flowing water. If you look on the side of the Cave des Producteurs in Vouvray you will see the flood marker for 1856 and be astonished that the water was ever that high -- neither river is visible from the Cave des Producteurs under normal circumstances. 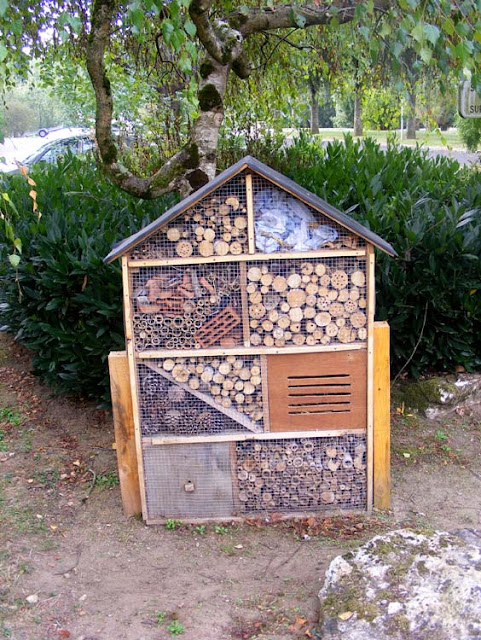 Nazelles-Négron is twinned with Vomp in Austria and the insect hotel was made by school kids from the two towns when the Austrians were on a visit. There was a nice explanation of what types of creatures could use each of the section stuck to the side of the box. For example, solitary bees (pollinators) such as orchard and mason bees like hollow stems to lay their eggs; the larvae and adults of flower bugs (predators of mites and aphids) will shelter in bits of bark and dried leaves; bumble bees (pollinators) might take up residence in the box with a 10 mm hole and a little landing platform; ground beetles (predators of slugs and wireworms) will like pieces of branches and tree stump; lacewing larvae and adults (predators of aphids and mites) will occupy the sections slot openings filled with wood shavings or pine cones; ladybird adults and larvae (predators of aphids) like the slot opening sections filled with dried leaves or pine cones; solitary wasps (predators of various larvae) like the holes drilled into wooden blocks and hollow stems; butterflies (pollinators) will use boxes filled with straw or dried grass; earwigs (predators of aphids and small caterpillars) like upturned terracotta pots stuffed with straw; hover fly larvae (predators of aphids) like hollow stems.


Looking down the Cisse Valley. 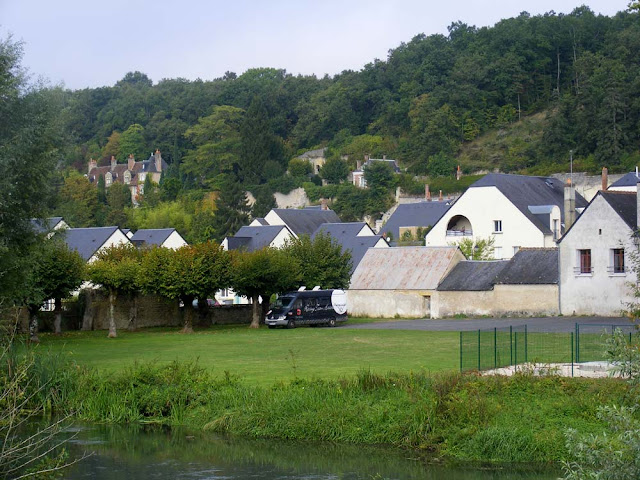 The building in the left distance is the privately owned Chateau of Nazelles, situated in the delightfully named rue Tue-la-Soif (Kill Thirst Street). It was built in 1518 and remodelled in 1765. Along this section of the river cliffs there are half a dozen chateaux. One of them is the 18th century Chateau de Perreux, which is just a grand single pile fronting on to a vast underground gallery system according to a friend of ours who lives in Pocé (just a few doors down from Mick Jagger, as it happens).

Email ThisBlogThis!Share to TwitterShare to FacebookShare to Pinterest
Labels: Insects, The Car and Driving, Towns and Villages near Preuilly