The Chateau of Langeais

The chateau is full of tapestries. This one is a detail showing the creation of Eve. We assume the strategically placed plant in front of Adam is a plum tree, or maybe some sort of nut... 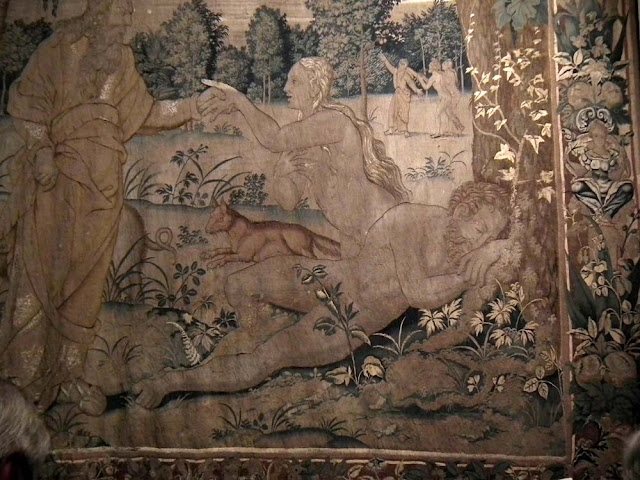 The combination of castle keep from the end of the 10th century and the 15th century fortress right in the village of Langeais on the Loire river makes this site one of the most interesting in the west of France.  The keep is interesting because it is the earliest Romanesque example still in a reasonable state of preservation, and the later fortress is of interest for its great architectural homogenity.


The handsome profile of young Charles VIII.
I believe this is the original bronze and the one at Loches is a copy. In the form of an elongated rectangle which forms a barrier across the natural limestone ridge, its dimensions are close to those of other contemporary castles ie 16 metres by 7 metres. By contrast, the thickness of its walls, at only 1.5 metres, is less than other similar structures. Only the eastern facade, facing the current garden, and the southern facade were saved from demolition in the 19th century.


The dining room with its unusual fireplace. 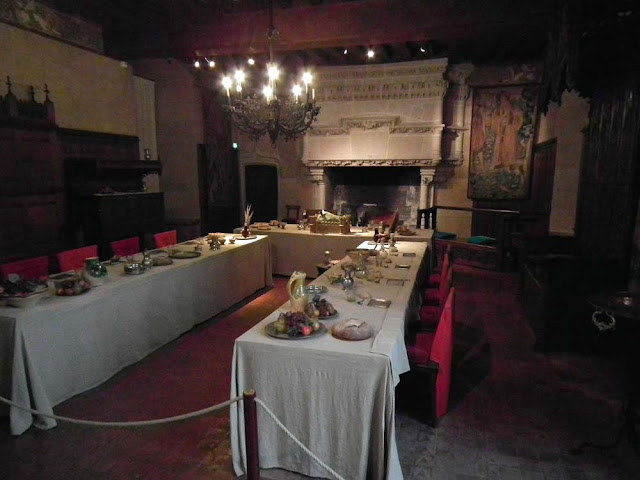 The Royal Chateau of Louis XI

The first thing that strikes you about the exterior is that it is massive, powerful and very homogenous. Its good state of preservation is due to the fact of it having always been directly administered by the king, and few alterations were made. 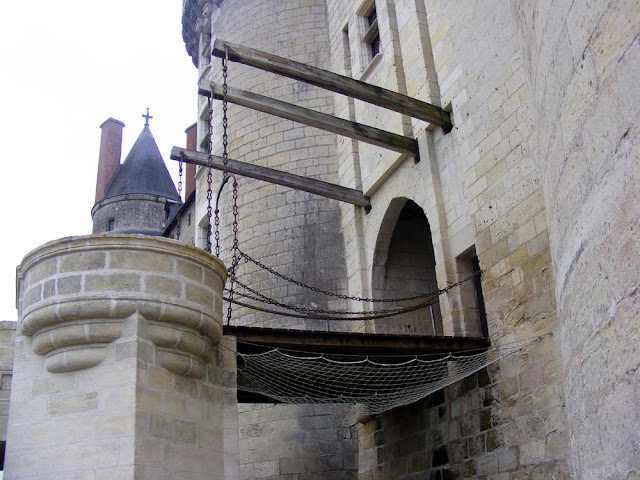 It is a perfect and complete example of military architecture of the 15th century. Facing the Loire it is topped by a wallwalk passing through towers.


A detail of the waxwork tableau of the marriage of Anne of Brittany and Charles VIII.
The formidible looking female in the centre foreground is Charles' sister, Anne of France. 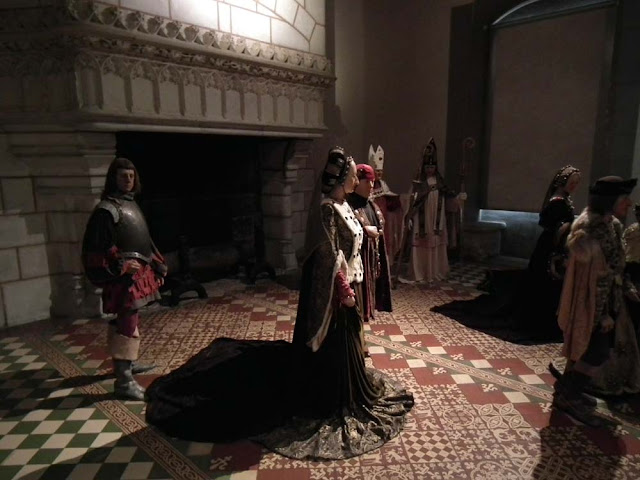 The machicolations with their trilobed decorations run for 130 metres, alternating murder holes and arrow slits at regular intervals, with plenty of blind spots for keeping watch and for shooting. The exterior mullioned windows on this outward facing facade could have been added later when the increasing use of cannon reduced this buildings effectiveness as a defensive structure. The basements are at the level of the deep dry moat, now partly filled in.


The courtly wheelers and dealers present at what amounts to the forced marriage of Anne of Brittany to Charles VIII. Another detail of the waxwork tableau on the first floor. 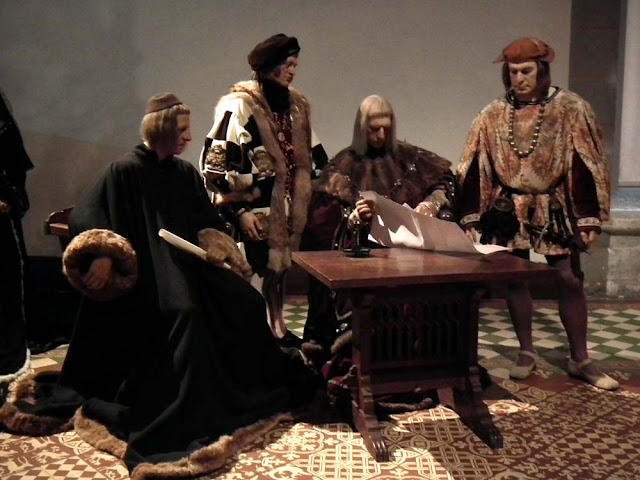 Access is by an interesting drawbridge designed in the 19th century. Originally there was a ramp, now there is a monumental staircase which is not at all authentic, but allows access from the street.


The remains of the 10th century castle keep, built by our old friend Fulk Nerra. 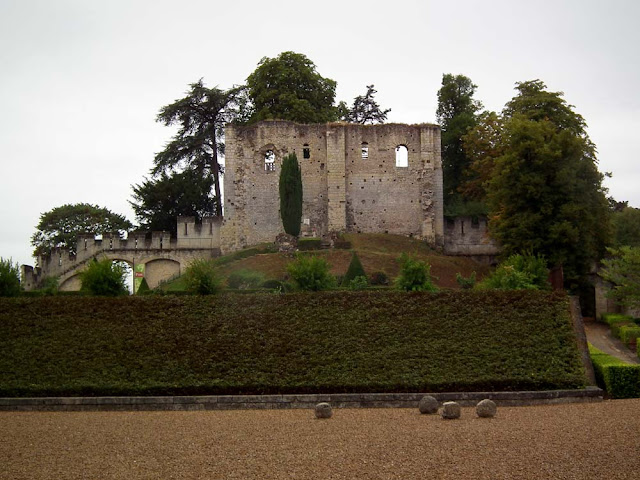 The facades of the open rear courtyard have an elongated appearance due to three external octagonal staircase towers and dormer windows in the main roofs. The decorative motifs are somewhat old fashioned for the date of the chateau but they are finely carved and include many examples of the local flora (oak, vine, ivy, holly, cabbage) below the windows.


The chateau from the rear, showing the courtyard facade. 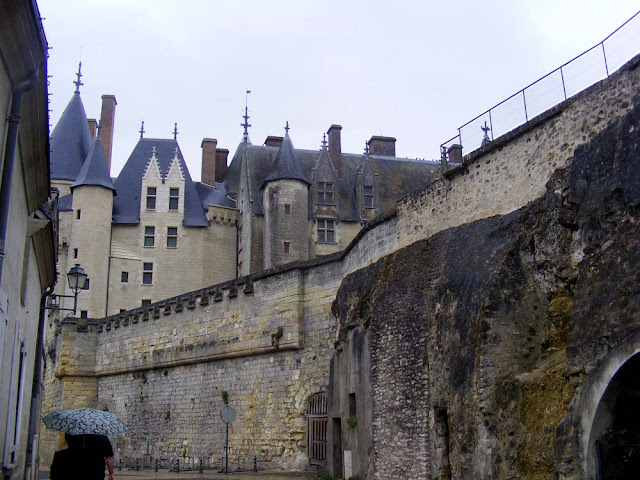 The Interior
The quite remarkable rooms were entirely restored in the 19th century. They feature carved monumental fireplaces, glazed tile floors that reproduce the old designs, carved beams and joists, window seats and lots of colour.


A detail of some of the 19th century floor tiles, reproducing the late medieval motifs.
We were particularly taken with the toothy dolphins. 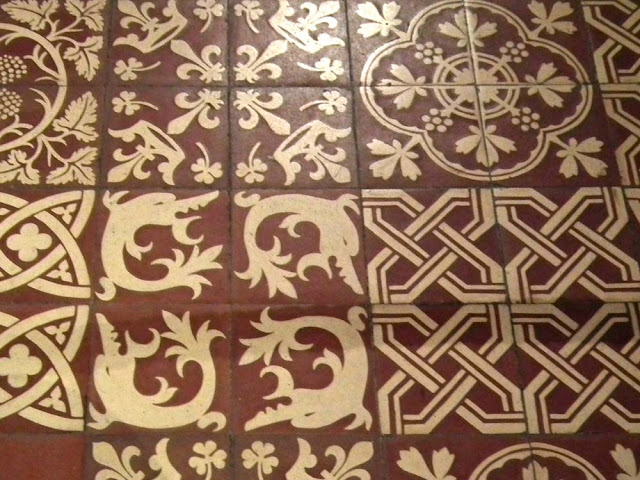 The two big rooms retain two really beautiful fireplaces. That on the ground floor is decorated with oak leaves and three rows of tendrils. A series of machicolations and crenellations with the heads of characters appear above the cornice. This decorative scheme is extremely rare and echoes that of the exterior of the building.


This 15th century Rhenish triptych on the wall in one of the rooms of Langeais chateau shows, as far as I can work out, a bearded king seated on a throne (left), a lady or female saint reading (centre); the same king and presumably his queen dining (right). 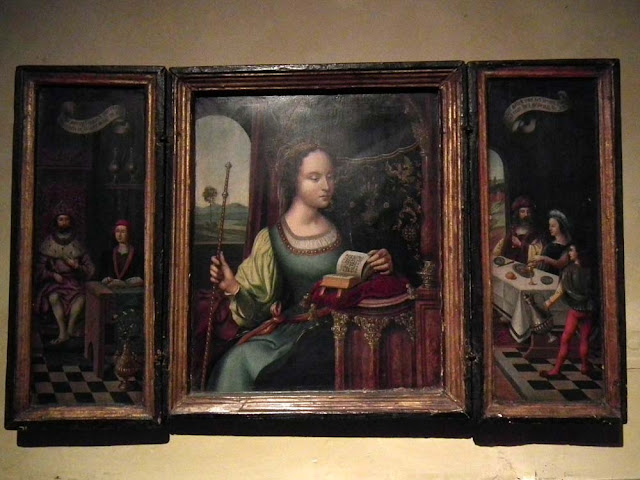 On the first floor the great fireplace is decorated with flamboyant pointed arches and a cornice of frilly cabbages. The rafters in the attics form a perfectly preserved 15th century architectural space.


The view through one of the windows in the chateau. 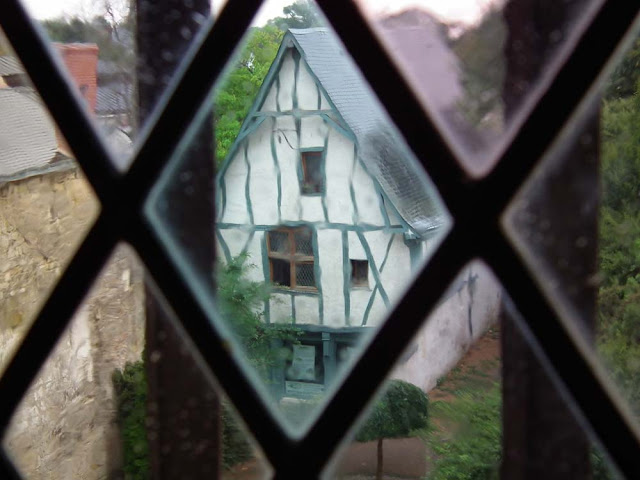 Looking along the wallwalk at the front of the chateau and across the town.
You can see the grand staircase at the entrance far below. 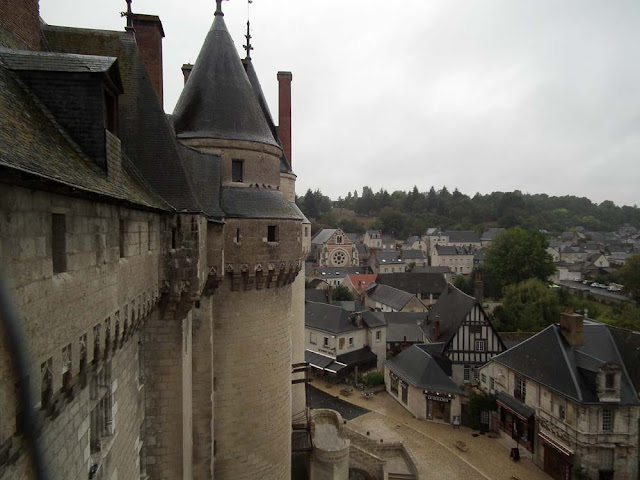 Window seats are installed throughout the chateau, further evidence
that this became a luxury residence rather than a defensive building quite early in its life. 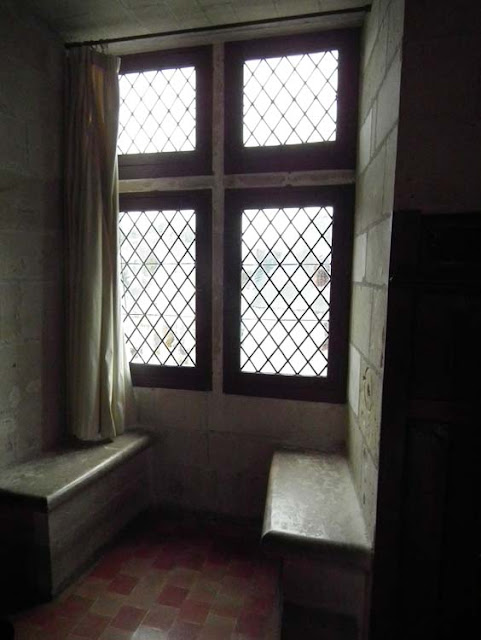 
If anyone happens to have a Dell Latitude E4300 or E4310 with a working UK keyboard but otherwise knackered, please drop us a line. (I know, but if you don't ask, you'll never find out!)/

Edit: sorry - should have said "Dell Latitude E4300 or E4310 laptop with a working UK keyboard, but otherwise...

I have several DELL keyboards. What is specific about the E4300... We are back later this month if I can find you one... C

sorry - should have been "Dell Latitude E4300 or E4310 laptop with a working UK keyboard".

Ditto CHM's comment. Just looking at those window seats makes my back ache.