Fundraising for the Restoration of the Chapelle de Tous les Saints 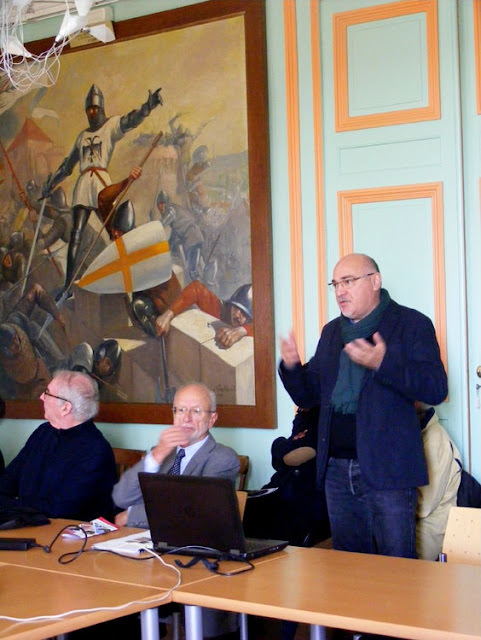 As long term readers may remember we are involved in the efforts to save the Chapelle de Tous les Saints in Preuilly. It is in a parlous state, with a broken main roof beam and leaning stone walls. Inside is a precious remnant of the late Middle Ages or eary Renaissance. The chapel contains a very rare wall painting depicting a danse macabre. It is one of only nine danses macabres surviving in France, and most importantly, one of only two which depict women as well as men. 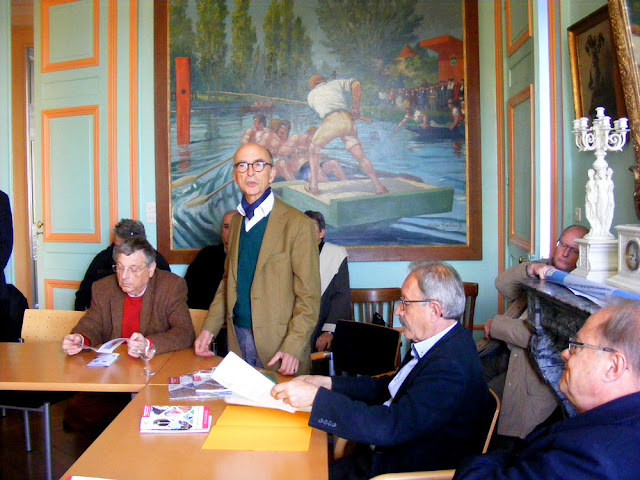 Since we first met with the Fondation du Patrimoine, the wall paintings conservator and tendered for architects, Bernard de la Motte has been beavering away to secure grants to fund the project. In May he finally received notification that DRAC (the Department of Culture and Communication) would give the maximum allowable grant of 40% of the total funds. Charitable grant giving organisations such as La Sauvegarde de l'Art Français are also lined up. SAP members Jill Elton-Wall, Gilberte Blaszczyk and Christine de la Motte have raised around a thousand euros with their efforts sewing and selling small textile pieces (spectacles cases, Christmas decorations, bags, cushions, etc). Dominique Robin has made a video about the chapel and Bernard has written a booklet about the history of the chapel and its importance; Antoinette and Niall translated it into English so the booklet is in both languages. Antoinette and Niall also went off to Troyes in May for the annual conference of the Association des Danses Macabres d'Europe where Antoinette delivered a brief talk about the chapel and brought it to the attention of many interested scholars. While there she was able to network a bit and get more of an idea of where our danse macabre sits in the genre. She also raised €60 with the sale of booklets. 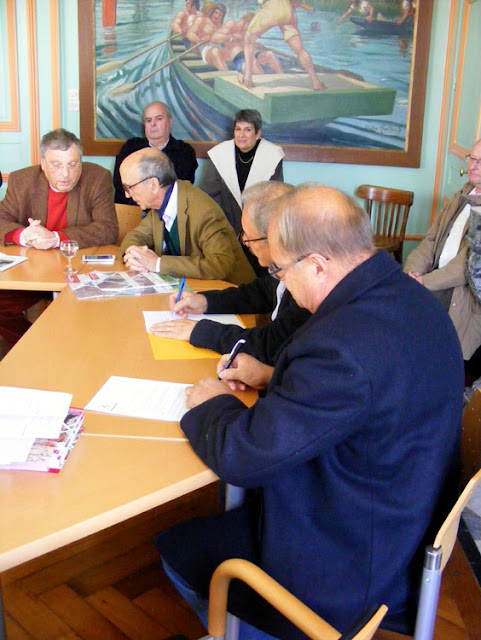 The final piece of the funding puzzle is to seal the agreement between the Fondation du Patrimoine and the local town council (commune). The Fondation du Patrimoine will promote the project and administer the fund raising. They will then hand the money over to the commune to fullfil the locals part of the bargain, but in order to remain eligible for the DRAC grant we must raise 5% of the total funds. That's about €15 000 we need to raise as our contribution to the €300 000 needed to complete the project.
Drinks and mingling at the end. 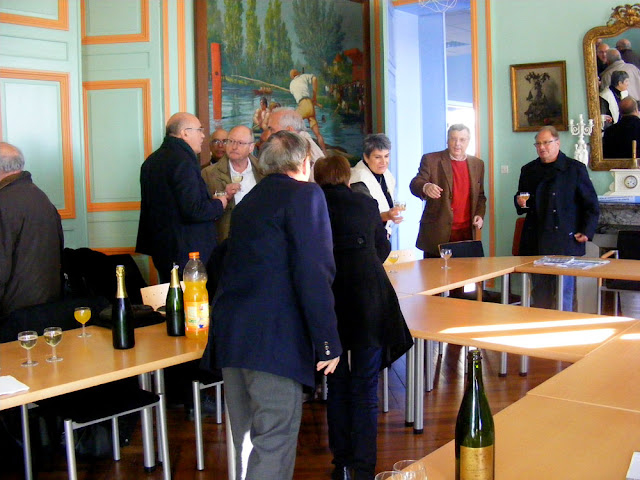 It is hoped that work will start sometime next year. Jean-Philippe Barthel is planning to hold occasional site visits for donors to see the progress. He feels it is essential to keep donors in the loop like this. I've briefly discussed doing the visits jointly with him so I can translate for anglophones. When I spoke to him about this he grinned ruefully and said, in heavily accented English, that his English is very bad. He then proceded to tell me a story, in French, about taking a group of American students on a visit to see the stained glass windows of Blois cathedral. It was an experience he doesn't want to have to repeat.

If you would like to contribute to the project you can make a donation via the Fondation du Patrimoine page for the Chapelle de Tous les Saints, Preuilly. Remember that if you submit a French tax return you can offset the donation against income, and the chapel fund benefits from an extra 66¢ from the State for every €1 donated.

Our previous posts about the chapel and its danse macabre are here.


Can anyone remember how Halloween/All Saints Eve was celebrated in France pre-Disneyfication (if at all)? We have asked around, but all we get back is "it's all American these days".
Simon

Computer News: We picked up the office computer from Georges at the Geek Garage yesterday. He was unable to put the new computer's innards into the old case because the motherboards were not compatible. However, he has done some 'panel beating', as he termed it, and straightened up the case and the power pack, as well as sort out the on/off button, which was stuck. Simon got it all up and running, except for our photo archive database. He very much fears he is going to have to re-index every photo.
Posted by Susan at 09:00

Glad to know, especially at this time of year, that the business of the Chapelle de Tous les Saints is going in the right direction.

Congratulations to Antoinette and Niall for their action and fundraising.

I'll see what I can do as far as a donation for this project is concerned.

Pre WWII, Halloween/All Saints Eve was unknown in France. As far as I know, the only Eve we celebrate (not counting Adam's) is New Year's, better known as Saint-Sylvestre. What was a somewhat equivalent for children was (still is?) la Mi-Carême.

P.S. Could Mardi gras be counted as Ash Wednesday's Eve?

Thanks chm. I've never heard of la Mi-Carême so I don't think it's a thing in the Touraine any more. I had to look it up.

I don't remember any All Saints eve activities in Paris back in the 1970s and '80s. I don't know when the Halloween thing started in France, but it wasn't very long ago. Toussaint itself has been a holiday forever.

The French Wikipedia article says Halloween started being observed in France in the late 1990s.

I have read somewhere that the enthusiasm in France for Halloween is already waning.

Hallowe'en in France seems to be all about flogging costumes, sweeties and pumpkins, none of which have much by way of taste. I suspect that people have just got bored.