Sunburn and Weaving in the Vines

In mid-September we had the opportunity to go out into the vines with Vouvray winemaker Alexandre Monmousseau. He took us up to his parcels at Montgouverne.

Vines that have had their long tendrils trimmed. 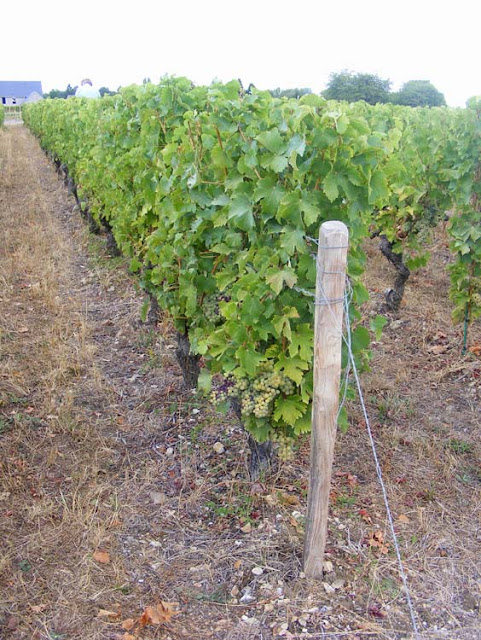 These two parcels are where he experiments with new techniques, so one of the things we talked about was his trials of plaiting the vine tendrils. Instead of clipping the long growing tendrils of the vines in summer as is the normal practice, he is experimenting with winding the tendrils around one another horizontally along the top support wire.

Alexandre demonstrating plaiting (or trimming -- difficult to tell which...). 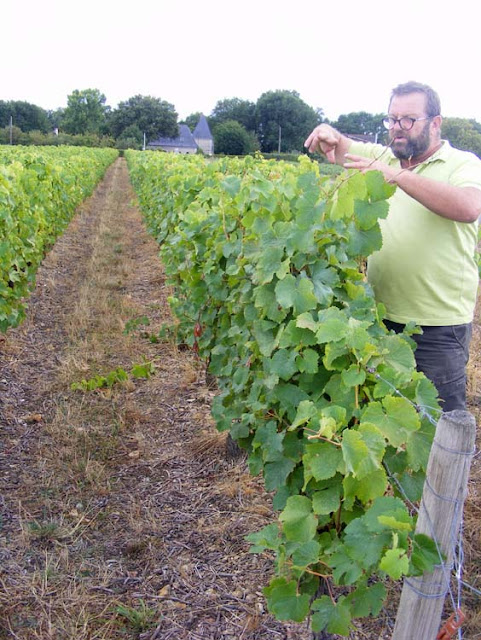 The growing tendrils are trimmed because the plant diverts energy into them that the winemaker wants the plant to direct to the fruit, and the extra leaves cause a bit too much shade for the ripening grapes. However, Alexandre is intrigued by a new idea that the tendrils are the vines antennae, sensing environmental conditions that it should respond to. The theory is that if the tendrils are left to grow they will in fact stop of their own accord. However, they are a nuisance to the vineyard workers if they are left to wave about at head height, so they are gathered together in bundles and plaited around one another and the top wire. It's quite a lot of work but it is just swapping one task (summer trimming) for another, slightly later in the season (plaiting). 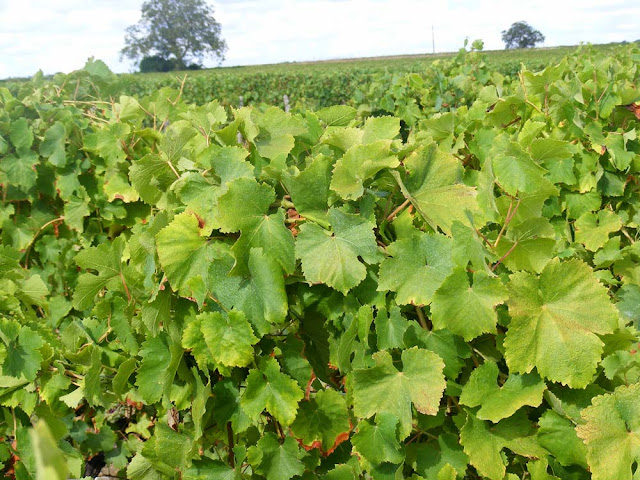 In French the technique is referred to as tressée, which translates as 'plaited', but Alexandre couldn't remember 'plaited' so we suggested 'woven', which he got on with better. This will be the second vintage from these plaited vines and so far he is very happy with them. 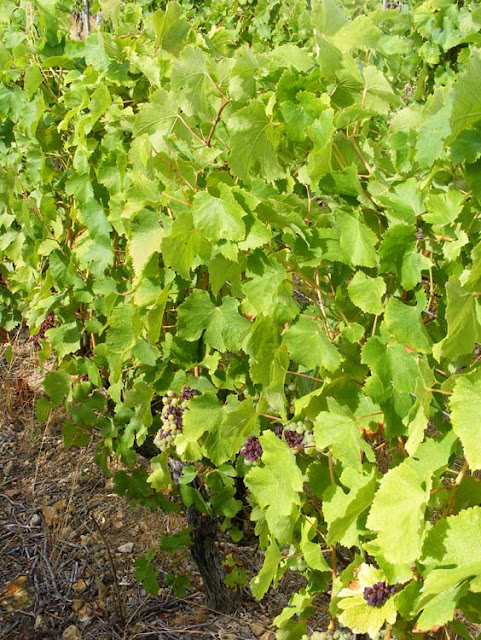 The summer was hot and dry, unusually so, and one of the other things Alexandre showed us was the sunburnt grapes. They have been frizzled by the endless sun, long before they are ripe, and are ruined. But with any luck the rest of the grapes are better than average.

The rootstock these Chenin Blanc grapes are grafted to is called Vitis riparia 'Gloire de Montpellier'. V. riparia is one of the grape vine species native to America that was brought in to introduce resistance to phylloxera. 'Gloire de Montpellier' is a variety developed for French conditions from that species.

We also talked about other winemakers in the area. Alain le Capitaine, just down the hill from the Chapelle Saint-Georges in Rochecorbon, was very highly spoken of by Alexandre. Apparently he is a nice bloke and a very fine winemaker. Sometimes, admitted Alexandre, his wine is better than Chateau Gaudrelle's!

Another winemaker we mentioned didn't come out of the discussion so well. I won't name and shame, but when we said to Alexandre we thought this person's wine was really terrible he agreed. He said the guy just doesn't have the passion, but inherited the winery from his father and grew up with the expectation that he would be a winemaker. His father, who Alexandre says made superb wines, is still alive, but retired. It's a shame all round, a tale of a misdirected life and the power of family expectations.

It's always a treat to get out amongst the vines with Alexandre and I always learn a lot.

French Expression: Two sentences which are jolly useful in discussions -- 'Je vois ce que tu veux dire' ('I see what you mean') and 'On ne voit pas l'intérêt' ('We don't see the point').

The first is literally 'I see this that you want to say'. To indicate you mean such and such or to ask what someone meant you use the form 'to want to say' in French. Where I might use the abbrieviated Latin 'ie' in written English, in French I would use 'c'est à dire' ('that is to say'), which can be used in writing or speech.

The second sentence is literally 'One doesn't see the interest'. I would use 'on' in this case to distance myself slightly from the statement, so as to sound more polite or less blunt. 'On' translates literally as the English pronoun 'one', but in French is used much more frequently and much less formally, especially in spoken French. 'L'intérêt' is 'interest' in the sense of 'value', 'benefit', 'gain' or 'point'. To say that something is 'd'intérêt' is often to indicate that it is advantageous, especially financially, in French.

The above is my understanding of these expressions, but as anyone who knows me is aware, my French is dodgy. Feel free to correct or clarify in the comments below.

Loire Valley Nature: A new entry has been added for Greater Mouse-eared Bat Myotis myotis. At 13cm this is the biggest bruiser in the Loire Valley bat bunch.

A la cuisine hier: Penne pasta with homemade tomato sauce and sprinkled with proper parmesan cheese. Followed by a homegrown Golden Delicious. One of our Golden Delicious apples produces the most beautiful looking fruit with pale creamy yellow skin and a pink blush. A good crisp, juicy, sweet apple.

Flash fried steak (cut the French way, with the grain, and from the flank) with potato wedges, steamed cauliflower and blue cheese sauce. The potatoes from the Aged One, the cauliflower from the BioBoys. The sauce was a little box of Bridélice bechamel with the left over roquefort from yesterday. Dessert was canned pineapple chunks with the last of the whipped coconut cream.

The brined onions are now doused in a hot pickling liquor made from cider vinegar and sugar and flavoured with cinnamon, allspice, caraway and cardamom. The onions have gone rather soft which is a shame. I think it would be better done with banana shallots because they are bigger and wouldn't soften so quickly. I wouldn't want them any sourer, but Simon thinks they are a bit sweet. He isn't keen on the spice combo either.
Posted by Susan at 09:00

Lucky you with your own Golden Delicious tree. By the time they arrive here in Texas from points East, they've lost that crispy juicy texture. What I like is the way slices keep their shape when
cooked.
Is the conclusion that leaving the tendrils on the wines has a specific benefit like an increase in fruit, better flavor, etc?
No matter, it sounds like a good idea to me.

We have 4 Golden Delicious trees, but one is much better than the others in terms of the appearance of the fruit and the quantity.

Alexandre isn't aiming for more fruit, but better fruit. The idea is that the tendrils provide information to the vine regarding how it should best grow over the season and changing weather conditions. It's too early to say if the results are significant or not.