My Back Pages: Simon's T-Shirt Archive (4)

This t-shirt is special in a number of ways, but mainly because I think it is the first gift Susan ever bought me.

Back in the day, before internet, emails, text messaging and cheap international phone calls, buying something from overseas was a real palaver. It involved seeing adverts in specialist magazines of choice (in this case probably the UK magazine "Guitarist", which I used to collect at a Toowoomba newsagency 3 months afer publication date) and sending off a letter with an international money order (ask your parent's, kiddies), and then waiting the thick end of another 3 months to receive the goods. 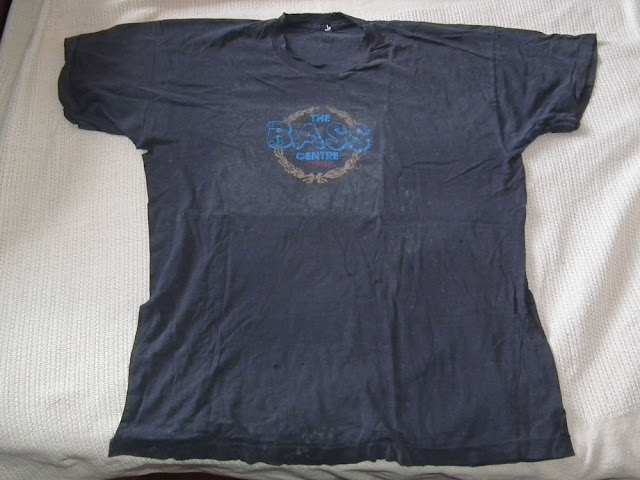 This t-shirt is from "The Bass Centre" which still exists, although no longer as a bricks and mortar shop. Back then it was based in glamorous Wapping, in deepest east London, a location I visited on many occasions after we moved to London. (I may have used the word "glamorous" in a less than sincere way in the previous sentence, but I did once see Bootsy Collins - dressed very much like this but with the addition of a nearly full length cape - walking towards the Bass Centre one day. Glamour indeed!)

I wore the t-shirt on stage for many years, as can be proved by the below photo. 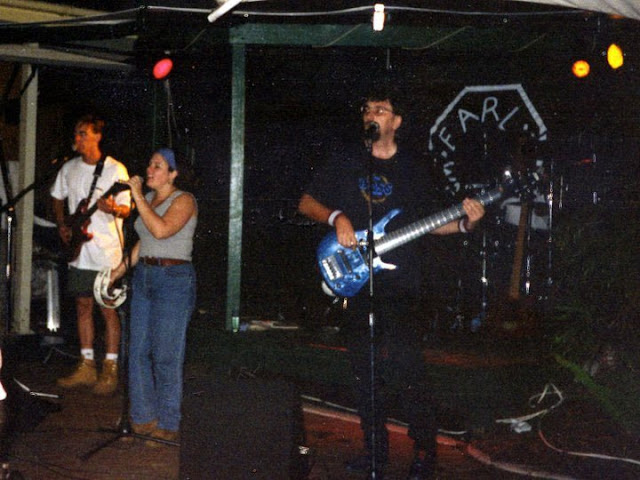 Also in the photo are Matt, Poss (Melinda) and Dr Rock's drumkit (Greg). If I was pushed to guess I would say it dates from 1995.

Computer News: Simon had the bright idea that we could use the case from our old computer and the innards of the new, so we have taken them both to the Geek Garage in Mezières-en-Brenne. Georges, the resident geek, says he can put it all together in an hour or so and we can go back and pick it up on Thursday morning. When we got back from delivering the desktop towers to Georges yesterday we discovered that my laptop had finally decided to update Windows! Woohoo!! A double win (hopefully).
Susan

Glad to know your electronics woes have ended. Still keep my fingers crossed, just in case!

May the "Gods of the Ethernet" look kindly upon you......Ah-octet!