The Chapel of Saint George, Rochecorbon

When my friend Suzanne was here in mid-September we took her to visit Chateau Gaudrelle. Alexandre Monmousseau, the winemaker and owner, made himself available for us and took us up to the vines to begin the visit. On the way up the hill we passed the Chapelle de Saint Georges and Simon remarked that we had never been inside. Alexandre immediately did a U-turn and popped in to Alain le Capitaine's winery, where the key for the chapel is kept. Key in hand, back we went to gain entry to the chapel.

The bell tower, and, if you look carefully, some of the quoin stones
on the main body of the chapel are reused Merovingian carved blocks. 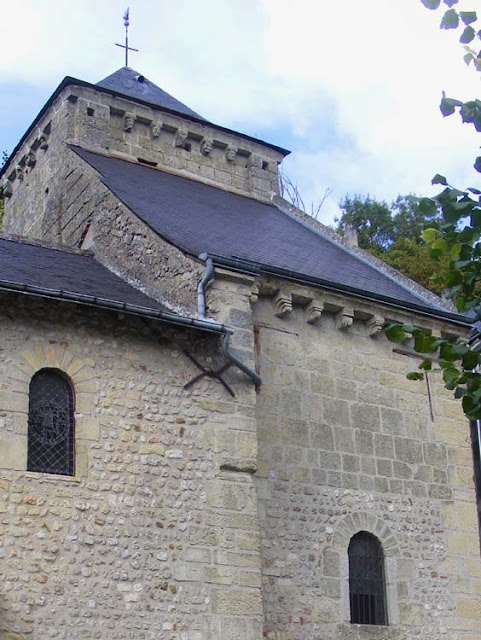 The Chapel of Saint George is an 11th century building, enlarged in the 12th century by reworking the choir and adding a square pyramid topped 15 metre bell tower. The chapel is immediately adjacent to the cliff and hides an oratory cut from the rock itself, perhaps as early as the 5th century, but certainly by the 7th century. Inside there is a 12th century fresco, 13th and 14th century wall paintings and a small 13th century stained glass window. 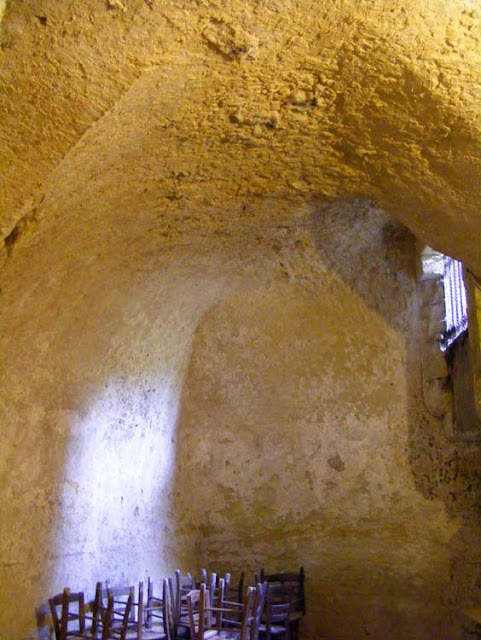 Fresco is a technique where pigments mixed with water are painted on to fresh wet render. Tempera is a wall painting technique where the pigment is diluted with water and a binder (usually egg) and painted on a dry wall. The first technique is much more resilient than the second because the paint and the render chemically bind more effectively as they dry. The oldest painting in the chapel seems to be at least partly done in the fresco technique. The more recent paintings are the second technique. Fresco is very rare in the Touraine and it's a much more technically demanding art form.

The painting on the left (below) is the earlier 12th century work, showing Christ washing the Apostle's feet. Stylistically it is typical of its time, with muscles and folds plainly marked in ochre and a very restricted palette of colours. Below this scene you can see the remains of an angel, and above there is a frieze of fantastical animals and Greek keys, also typical of the period. This is all that is left of the original decorative scheme of the chapel.

Fresco and tempera wall paintings side by side. 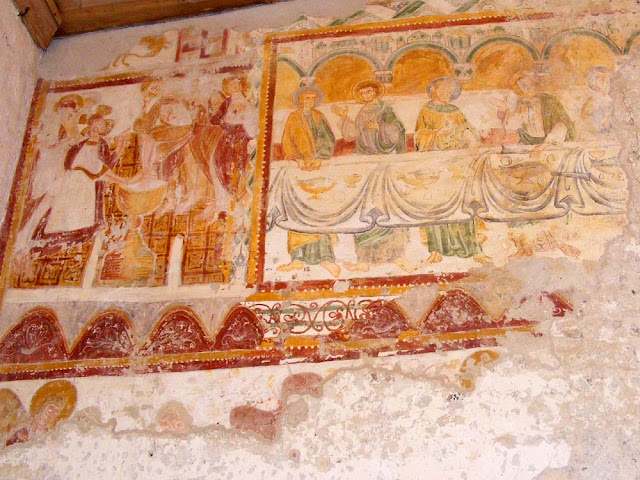 The painting on the right is the remaining half of a Last Supper. The meal has been served in the medieval fashion, where all the dishes are shared and each plate is shared by two diners. This painting dates from the early 13th century and slightly overlaps the earlier work. The palette is richer, with green and lapis lazuli blue in addition to the ochres and white. The attitudes of the subjects are more natural and realistic too. The image is tightly co-ordinated by the device of the regular arches above the Apostles and the drapery of the table cloth below them. Above the arches is a band of architectural ornamentation representing Jerusalem. 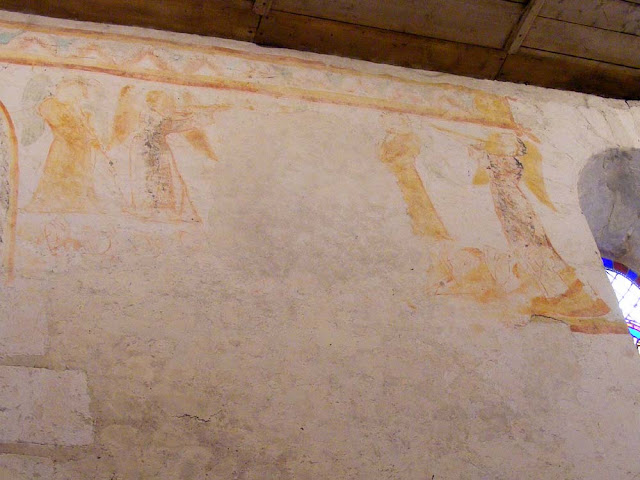 On the opposite (south) wall is the remains of a Last Judgement. All that can be still be seen are the angels with their trumpets and some decorative elements. This dates from the 14th century. 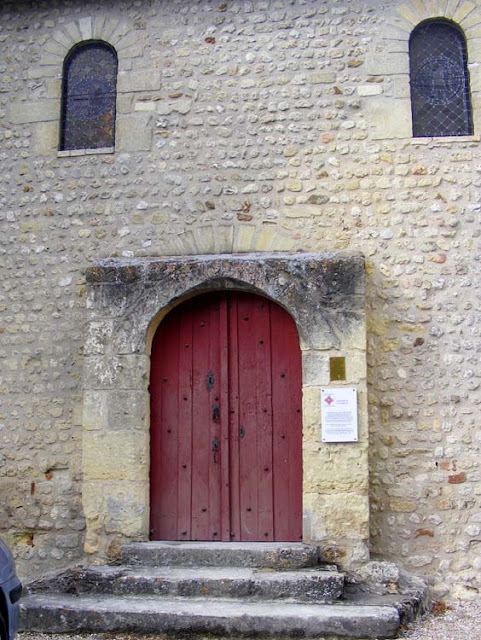 The original entry to the chapel was in the western end, but in the 18th century the construction of a house which butts up to the church destroyed the porch and the door into the chapel was moved its current position in the southern wall. Evidence of an earlier building on the site comes from carved stones from the Merovingian period (8th century) embedded in the exterior walls.


An angel and a king from an obscure Bible story. 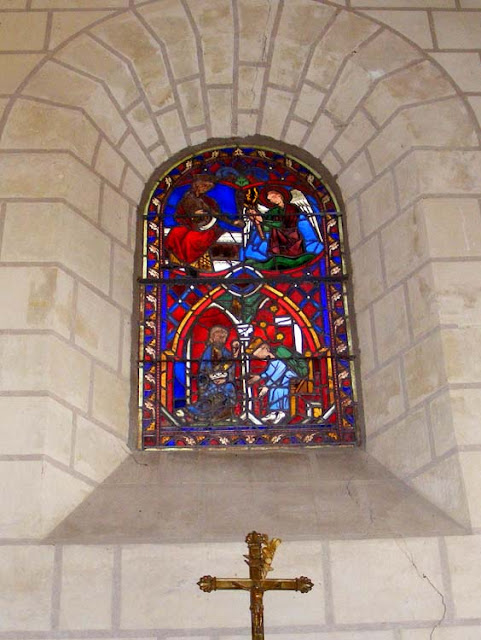 The stained glass window depicts the story of High Priest and King of Salem, Melchizedek, a contemporary of Abraham.

I've no idea what this is or how old or original to the chapel it is. 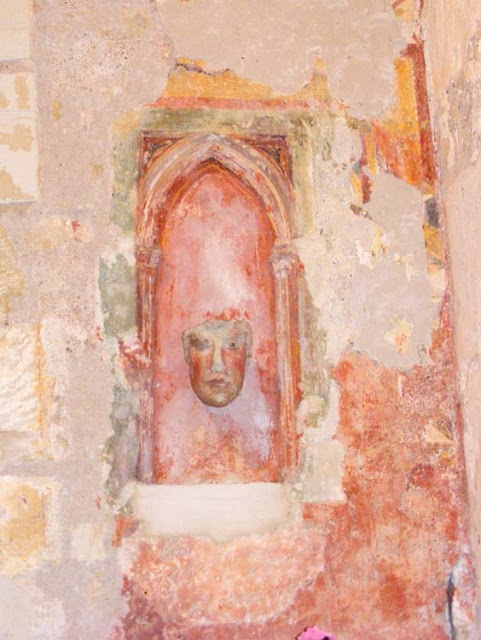 For more information read our friends Niall and Antoinette's blog posts about their visit to the chapel a few years ago. They wrote about the wall paintings, the stained glass and the Merovingian carved stones.

Learn Botany and Mycology: For readers living in the Touraine du sud who are interested in botany and/or mycology (and would like to practice their French), you could do worse than join the Association de botanique et de mycologie de Sainte Maure de Touraine. I've belonged for some years and it is a very friendly and welcoming club with a lot of expertise. Twenty or so outings per year are organised, usually on weekend afternoons, but sometimes whole days and sometimes mid-week. More details are available here. If you are really keen you could even do a botany MOOC and be mentored by expert members of the Association.

Loire Valley Nature: A new entry has been added for Lesser Horseshoe Bat Rhinolophus hipposideros, a small species that uses the many caves (abandoned underground limestone quarries) in the Touraine to hibernate.

Photos have been added to the entry on Bat Surveying in Indre et Loire. Chateau tower roofspaces and caves are great habitat for bats.